The Gulbenkian Theatre opened on the Kent campus in 1969. In its forty five year history it has seen numerous productions, from Shakespeare to musical extravaganzas such as AC/DC and Steeleye Span. The tradition of Christmas performances, including productions aimed at children, runs strongly through the history of the theatre. A fine example of this genre is ‘Sir Gawain and the Green Knight,’ staged in 1979, ten years after the Gulbenkian first opened its doors to the public.

‘Sir Gawain and the Green Knight’ was put on by UKC Dramatics, adapted from the epic poem, and directed by Paul Hodson. Hodson is still hugely involved in theatre today, and is currently adapting ‘High Fidelity’ by Nick Hornby for a tour in 2015, having previously adapted works by Bill Bryson, and put on plays at the Edinburgh Fringe,  (more information on Hodson’s work can be found at http://blakefriedmann.co.uk/paul-hodson). 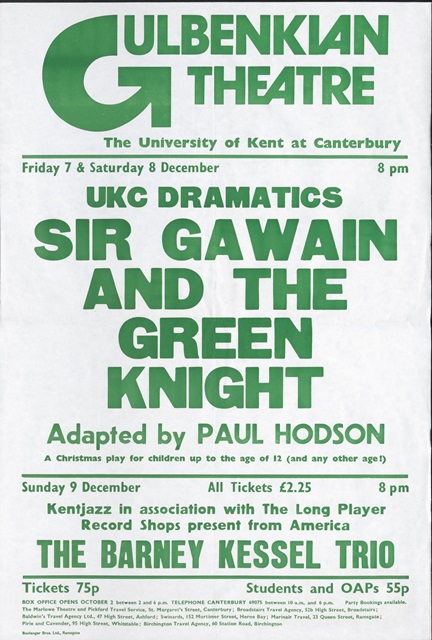 A variety of documents and ephemera relating to the ‘Sir Gawain’ 1979 performance can be found in the Gulbenkian collection. This includes posters, a theatre programme, stickers, local newspaper cuttings and a teacher’s booklet, provided by UKC Dramatics for local schools to study the story before seeing the play. In every item, one can see evidence of how the UKC Dramatics society was involved in every aspect of production, from acting to outreach to the local community.

It is interesting how, in a time when school trips to the theatre were not as common as they may be now, the University of Kent was working hard to have a positive effect on theatre in the local community, and fantastic to see just how successful they were. One unidentified newspaper cutting, dated October 12th 1979, is a small article concerning the production, informing the reader that ‘Paul [Hodson]…has contacted East Kent schools to encourage children to take part in his illustration scheme.’ An exhibition of local children’s artwork relating to the play was produced, and could be viewed in the Gulbenkian prior to each performance. Another cutting from the Kent Herald, dated December 11th observes that ‘the play has captured the children’s imagination, for all seven performances have sold out.’ This shows not just how successful the play was in terms of acting and production, but also how keen the local schools and the University of Kent were to work together. In fact, the play and the involvement of the local schools worked so well that two extra matinees had to be scheduled to fulfil demand. 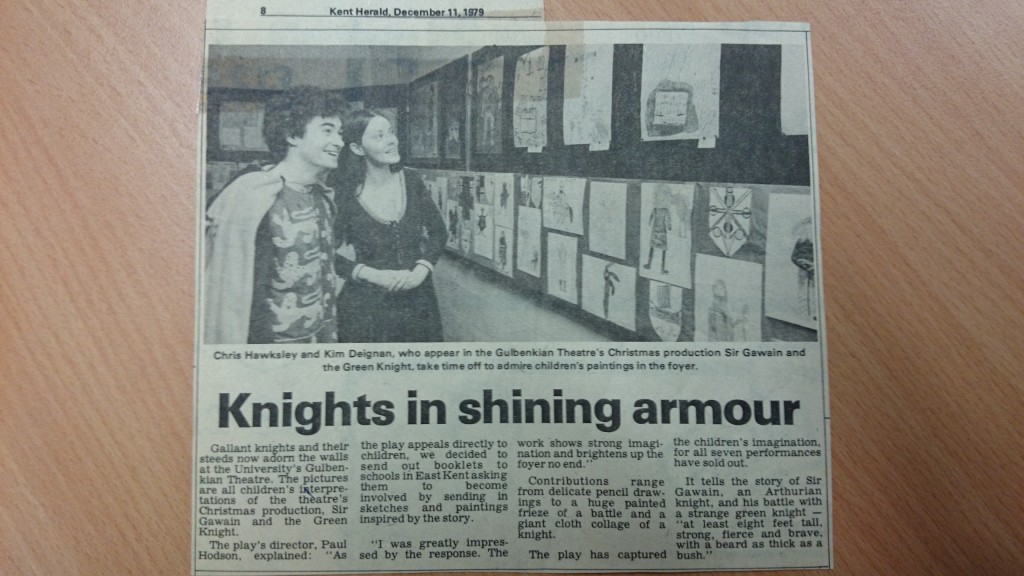 The item that shows UKC Dramatics dedication to outreach to the local schools most is the teacher’s information booklet. Produced by the director, the booklet firstly provides an abridged version of the old poem, complete with illustrations, that teachers could read to their classes. Following this is information on the background of the poem, and then a section containing a series of suggestions of projects that could be employed in school in the run up to seeing the show. The idea of putting on a small in-class production of the play is proffered, using the provided story as the play text. Art projects are also suggested, along with comparisons of different areas of the story, and a more in-depth look at the themes running through it. This booklet must have taken a long time to produce, and the amount of work that has gone into it shows Hodson’s dedication to the production, education, and the wish to have the local community as involved as possible. 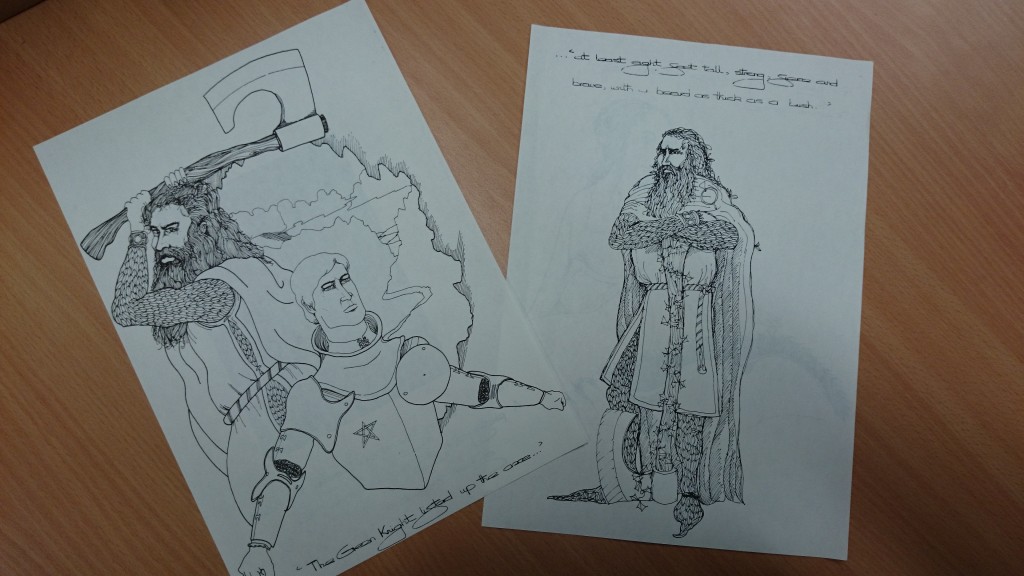 Two illustrations from the teaching booklet, featuring Gawain and the Green Knight themselves

Why are Christmas productions so popular? Obviously, as in this case, there is an element of people wanting to see a well-produced show, but be they Christmas plays such as this, winter themed ballets such as The Nutcracker, or a good old-fashioned panto, Christmas seems to be a time for special performances that everybody wants to see, including those who would not necessarily go to the theatre the whole year round. It seems a huge part of the appeal is that Christmas is generally recognised as a time to be with family, and productions such as this provide entertainment for all ages. As the Gazette, dated December 14th, observed about ‘Sir Gawain’ ‘children (and adults) loved it,’ referring to the whole audience ‘roaring our approval,’ and all ages finding the jokes hilarious.

‘Sir Gawain and the Green Knight’ is just one of many student led productions that have graced the boards at the Gulbenkian Theatre. The items within all these collections show clearly the amount of effort students put in to produce such great shows, and are fascinating from the perspective of local and theatrical historians, or those wishing to put on such a production themselves. The Gulbenkian collection can be explored via the Special Collections and Archives website. It has yet to be completely catalogued, so look forward to more opportunities to learn about Kent’s past in the future.

To discover more in this collection go to the Gulbenkian Collection.