We are delighted to announce that the full collection of printed materials from the Reading-Rayner Theatre Collection is now available to discover in Special Collections & Archives.

The Reading Rayner collection is an expansive selection of items, largely consisting of theatrical material. This includes books pertaining to the history of theatre and film, biographies and memoirs, and play texts, as well as a large number of theatre programs spanning the 1930s to the 1980s. Alongside this is the Play Pictorial, a series of early theatre magazines, bound together, containing reviews and photographs from popular productions of the time, spanning the years 1902 – 1939, when the magazine was merged with Theatre World due to the paper rationing of the Second World War.

The collection is named after Jack Reading and his partner Colin Rayner, who began donating their material to the University of Kent in the 1980s. They initially started their collections separately, but brought them together to form one super-collection. Jack was a founding member, and later Secretary General, of the International Federation for Theatre Research, and was awarded an Honorary Doctor of Letters by the University of Kent in 2000.

Personal ephemera often lay within the pages of many of the books themselves, undiscovered until we pulled back the pages to reveal personal hand written letters, travel documents and even a receipt for potato seeds! 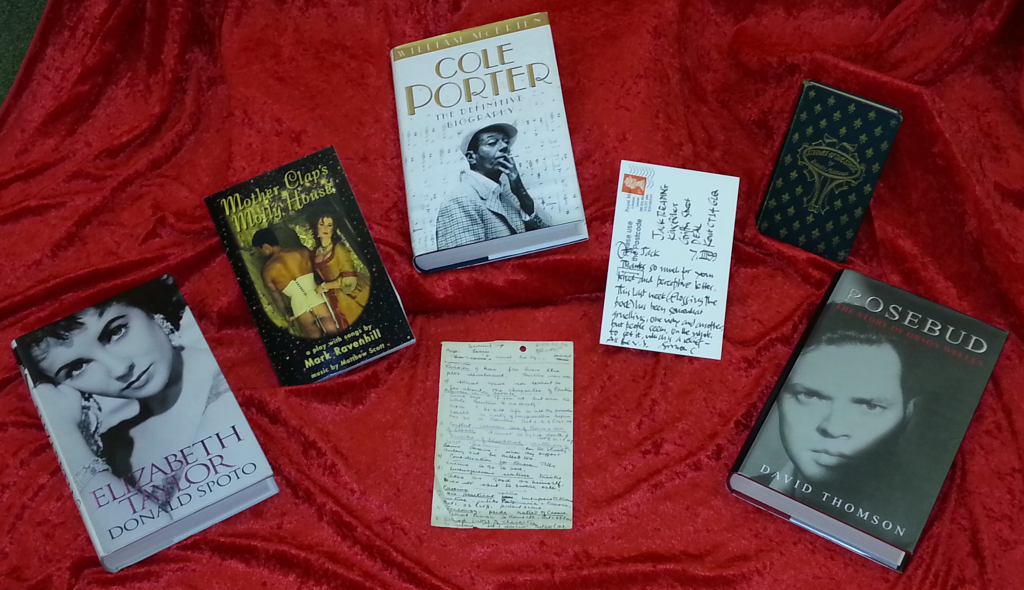 Having been a cataloguer of rare books and special collections at the University of Kent for around nineteen months, I have grown accustomed to handling books many centuries in age, with beautiful hand painted illustrations and delicate bindings that cover a diverse range of subjects.  I was initially struck by “The Changing Room: Sex, Drag and Theatre” due to the visually compelling front cover.  There are many books within the collection that offer an insight into all aspects of theatre and performance, many with generically designed book covers, but this screamed what it was all about from a distance.  Written by Laurence Senelick, director of Graduate Studies, Fletcher Professor of Drama and Oratory at Tufts University in Massachusetts, “The Changing Room” explores the history of cross-dressing in theatre from ancient times to the modern day, offering to take “readers on a colourful, lavishly illustrated tour of the stages and dressing-rooms of history, from tribal rituals to sacred prostitution, to contemporary musical comedy and performance art.”  I was impressed at this book’s ability to pull the attention of someone whose interest in theatre and performance is minimal and which has subsequently left me with a little bit of a thirst to find out more about the performing arts. 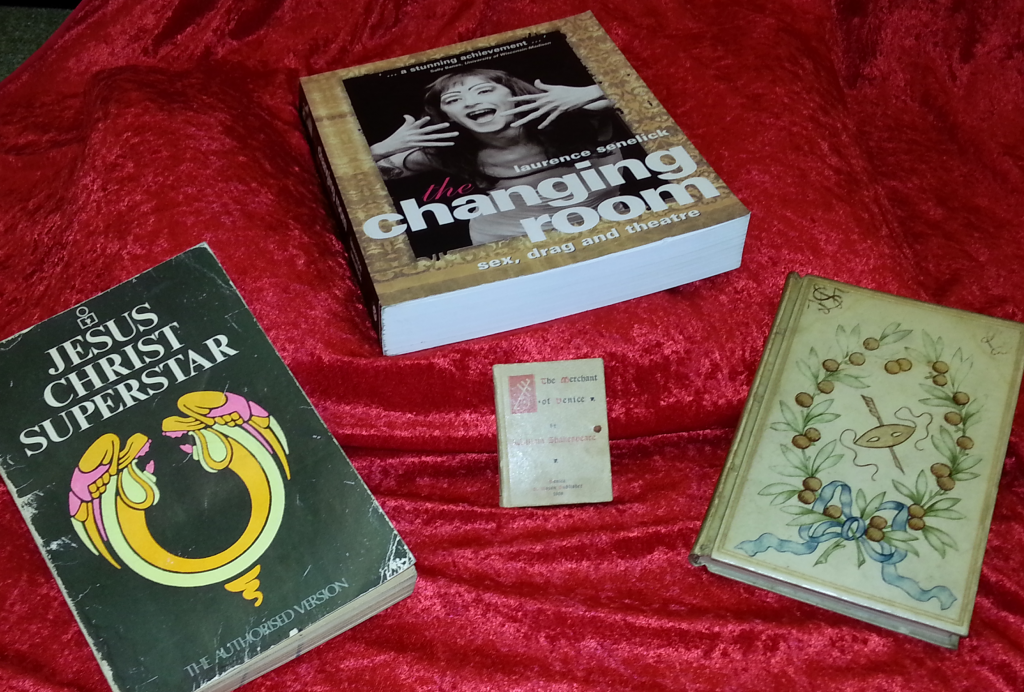 Our discoveries (clockwise from left): “Jesus Christ Superstar: the authorised version” ; The Changing Room: sex, drag and theatre” ; “Macbeth” ; “The Merchant of Venice.”

Of the items I catalogued, the oldest was from the first half of the 17th century, the smallest was a 7cm tall copy of Shakespeare’s The Merchant of Venice, (published in Venice, with accompanying Italian inscription from the buyer), and the most aesthetic, (in my opinion), was a copy of Macbeth with a hand decorated cover, complete with gold leaf. In terms of subject matter, the books I encountered varied from the traditional theatre of Shakespeare to 19th century burlesques (the precursor to pantomime rather than the exotic shows of today), to modern gay plays. One item that particularly stood out for me on a personal level was The Authorised Jesus Christ Superstar.

Musicals have been an interest of mine since I was about ten. I have seen Joseph, Evita, Cats and the Phantom of the Opera, and in 2012 I was at the O2 for the second performance of the Arena Tour of Jesus Christ Superstar. This book, never reprinted, records the development of the musical, from its conception by Andrew Lloyd Webber and Tim Rice, to the album and original Broadway production.

The book resembles an album of memories, following the first few years of Superstar’s life. Running continuously along the bottom of the pages are interviews with various people involved in the production, alongside a more in-depth interview with Lloyd Webber and Rice. There are plenty of photographs, predominantly black and white, but also several pages of colour plates of a higher quality, featuring images from the Broadway production, a facsimile of a highly decorative piece of sheet music for the title song and, bizarrely, a colour facsimile of “…And Through Him Save a World,” an issue of the Green Lantern magazine, featuring a modern messiah crucifixion scene. The book also contains facsimiles of posters and magazine covers, reviews and articles, letters from fans and cartoon strips. What I find hugely interesting however, is that it doesn’t just focus on the success of the production. It also considers the controversy that surrounded the show from the word go, featuring both positive and negative reactions from the religious community of the time, from the news that the Vatican was to broadcast the show in full, to letters informing the record company that they will have to pay for using the Lord’s name to make money.  This is a hugely intriguing book for any musical lover, theatre historian or person with an interest in religious culture. The sheer variety of material this book contains is sure to enthral the reader. 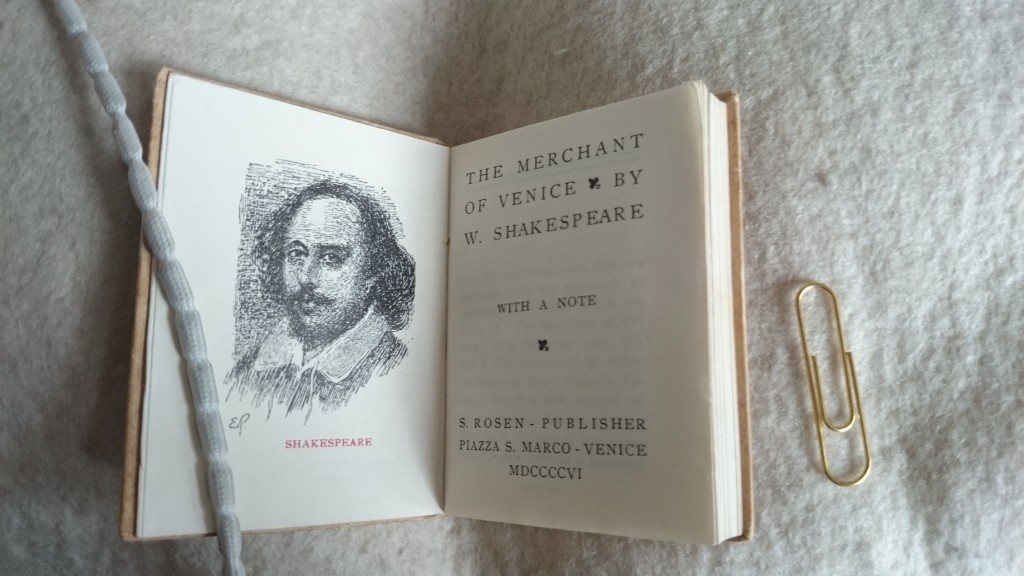 The cataloguing of the theatrical material is now complete, but the rest of the collection also contains fiction, poetry and rare books, yet to be discovered.

To explore all of this and more from the Reading Rayner Theatre Collection visit http://www.kent.ac.uk/library/specialcollections/ to search our catalogue or contact us for more information.

By Josie Caplehorne and Rachel Dickinson