So, I have finally been able to do some research on one of the indentures which we discovered earlier in the year and I thought you might like to know the results…

This particular document is from the ‘thirtenth day of July'(sic) 1657, and records William Wiseman mortgaging the lands of his family in the parish of St Mary’s and Allhallows, including the manor of St Mary’s Hall, in the hundred of Hoo, Kent. One Robert Wiseman, ‘Doctor of the Civill Lawes’ (sic) is to pay £1,000 for these lands, and to pay an annual rent of one pepppercorn on the feast of St Michael the Archangel (otherwise known as Michaelmas, on 29th September) for the term of one thousand years until 16th July 1661, by which time William Wiseman or his heirs agree to have paid back £1,240. 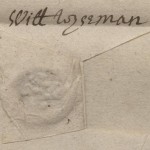 William Wiseman was the second son of Sir Thomas Wiseman of Rivenhall in Essex, referred to in this document as ‘Esquire’ but he later became baronet, on 15th June 1660. William was born around 1630 and became the MP for Maldon; the baronetcy was created specifically for him and became extinct on his death (without heirs) in 1688. The timing of his elevation to the peerage is informative; it seems likely that Sir William had made a good impression on  Charles II, who returned to Britain in May 1660 to be restored as monarch eleven years after his father’s execution. Gathering more information on Sir William will take some time, especially because the Wiseman family had several titled branches in Essex, including the baronetcy of Canfield Hall and Thundersley, and because William appears to have been a popular Wiseman family name.

Robert Wiseman, it transpires, was rather more influential than his brother. The seventh son of Sir Thomas, he matriculated from Cambridge as a pensioner in 1628 and purchased muskets and ammunition during the early period of the civil war for Trinity Hall; these weapons were later confiscated by Cromwell. Robert progressed through Trinity Hall until 1653 and became a judge and jurist. He was warranted as an advocate in the Court of Arches in 1640 and in 1656, he published The Law of Lawes, or, The Excellency of Civil Law above All Other Humane Laws Whatsoever, championing the use of civil law. He became advocate-general on 15th June 1660 (intriguing since his brother became a baronet on the same day), was knighted in 1661 and reached the height of his career when he was appointed Dean of  the Arches, in 1672, effectively presiding over Doctor’s Commons. He was married twice; his second wife, Elizabeth North, was the daughter of the fourth Lord North and went on the marry William Paston after Sir Robert’s death. Sir Robert also died without leaving heirs, in 1684, leaving his wife as the executor of his will.

In total, there are three documents: the indenture referred to above, on parchment, and two smaller documents (almost A4 sized) on paper, both of which refer to the ‘Indenture or deed indented’. These smaller documents appear to be a receipt for the sum of £1,000 received by Sir William and an agreement to pay Sir Robert £2,000 if Sir William or his heirs default on the arrangement. These  documents does not include any signature or mark by Sir Robert Wiseman, but all three documents related to this transaction are signed by Sir William Wiseman. One of them even looks as though it was written by him.

There are three other names recorded on these documents as witnesses: Francis Clarke, Alington Payneter and Geo. (possibly George?) Gaell.Although I haven’t had much time to research any of these names in detail, it looks as though there are relatively straightforward links with the two Wisemans.

A Sir Francis Clarke of ‘Ulcombe, Kent’ gave consent for his daughter, aged 22, to marry in 1682 and entertained Charles II on the eve of his restoration at his house in Rochester. While I could find no immediate mention of Alington Payneter (perhaps due to spelling differences), it appears that one George Alington requested permission to alienate lands he held in Gillingham, Rainham, Chatham and Breadhurst (Brodehurst) in 1621, prior to the marriage of Elizabeth Alington and William Payneter: this may be a clue to some of Alington Payneter’s ancestors. So these two, it appears, were men local to the lands in north Kent which were to be mortgaged. 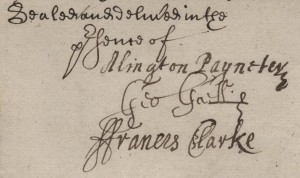 The third, presumably George Gaell, may be the George Gaell who died in 1667 at the age of 1663 and whose memorial records his position as Procurator in Curia de Arcubus: Procurator of the Court of Arches. Presumably, this man was known to Sir Robert.

There is one more thing that is interesting in the indenture. As part of a security clause, it is stated that this agreement is binding in spite of any ‘Order of Orders Ordinance or Ordinances Act or Acts of Parliament or other supreme authority’. This mortgage was signed on 13th January 1657, in which it was agreed that Sir William would pay Sir Robert in six-monthly installments, beginning on 16th January 1658 and ending on 16th July 1661. During this time, the Commonwealth collapsed; following Oliver Cromwell’s death in September 1658, his son Richard was installed as Lord Protector but was unable to maintain control of the army or its generals. Charles II returned to London on 29th May 1660 and was crowned in April 1661, a matter of weeks before the last installment of  William Wiseman’s payments was due. This simple mortgage agreement therefore covers a major turning point in British history, from Commonwealth to monarchy.

It is probably over-enthusiastic to suggest that the reference to the decisions of ‘Parliament or other supreme authority.’ is anything more than a product of the uncertainty of everyday life at this time, since the beginning of the Civil War in 1642. Although the men involved in this agreement all appear to have been closer to Royalist than Parliamentarian in their sympathies, it is highly unlikely that any of them could have foreseen the return of the king two years before the event. However, with Oliver Cromwell taken ill early in 1658, it is possible that the Wisemans were concerned about further political social and political upheaval, and took every precaution to ensure that this document was binding in every eventuality. Whether they hoped for the restoration of the monarchy which appears to have benefited both brothers is something that we will probably never know.

There you go; that’s just one of the recently discovered documents that gives a fascinating insight into the lives of people living through some of the most turbulent times of British early modern history.

Have a look at these links to see transcriptions of the texts: