All are welcome to attend the second of this term’s screening and discussion sessions which will take place on the 29th of January in Keynes Seminar Room 6, from 4pm to 7pm.

The Wicked Lady is a 1945 film starring Margaret Lockwood and James Mason. Known as one of the Gainsborough melodramas, it is reputed to have one of the largest audiences of its period, 18.4 million. The story itself was based on the novel, The Life and Death of the Wicked Lady Skelton by Magdalen King-Hall, which in turn, was based upon the (disputed) events surrounding the life of Lady Katherine Ferrers.

Margaret Lockwood stars as 17th century beauty, Barbara Worth, who steals and marries her best friend’s intended bridegroom, local magistrate Sir Ralph Skelton. At their wedding reception, Barbara meets Kit Locksby. For both, it is love at first sight, but too late as Barbara is now married. As Lady Skelton, she soon bores of rural life and seizes the opportunity to become a highwayman in order to win back her jewels from her sister-in-law, Lady Henrietta Kingsclere. Addicted to the excitement, Lady Skelton continues in her escapades and meets and joins forces (personally and professionally) with fellow highwayman, Capt Jackson. Through murder, robbery and betrayal, Lady Skelton’s double life catches her with her and she is mortally wounded by Kit Locksby. Dying, she confesses all to Kit and asks him to stay with her as she dies. However, appalled and repulsed by the truth, he withdraws, leaving her to die alone. 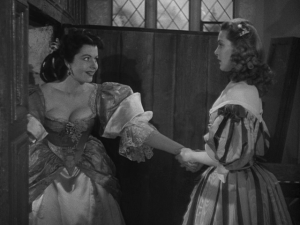 It is reported that due to issues with the American censors, extensive re-shooting was required before the film was released in the United States. The problems concerned the women’s dress bodices, which were considered low-cut and allowed too much cleavage to be displayed, and therefore unable to meet the requirements of the Hays Code.

Despite producing a variety of genre films throughout its twenty-five year existence, the Gainsborough studio became synonymous with melodramas, in much the same way as Ealing studios did with comedies. The Gainsborough melodramas were a sequence of films produced by the British film studio Gainsborough Pictures during the 1940s. This cycle of films often touched upon similar themes and frequently starred recurring actors who played similar characters in each film, such as Stewart Granger, Phyllis Calvert, Margaret Lockwood and James Mason.

The first film of the cycle, The Man in Grey, appeared in 1943. Starring both James Mason and Margaret Lockwood, it was based upon the novel of the same name. Its success led to a number of similar films being produced, often based upon on melodramatic period novels, such as, The Wicked Lady (1945), Fanny by Gaslight (1944) and A Place of One’s Own (1945). The films dominated the British box office, grossing top Hollywood productions in the UK. It has been argued that much of their appeal was in their overt escapism at a time when the Second World War was still being fought. However, the popularity of the cycle peaked in the immediate post-war years and the production of the melodramas continued until 1950. At the height of the melodramas’ popularity, both James Mason and Margaret Lockwood were respectively voted the most popular British male and female actors. 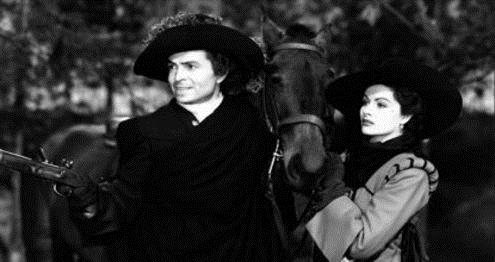 Focusing on the handful of period costumes romances produced by Gainsborough at this time, Pam Cook argues that although these films were rediscovered in the 1980s by film historians, the films remain largely ‘marginalised, ignored or subsumed into the consensus in discussion of national identity in British cinema’ (Cook, 1996). Even at the time of its release, Cook notes derision in some quarters. Simon Harcourt-Smith writing in Tribune said of the film, ‘…if the future of the British film industry hangs…on the success of The Wicked Lady, then let us dispense with that future.’ (Aspinall and Murphy, 1983, p74). Cook suggests that this critical neglect is due to how the costume and visual style, the representation of history and their mobilization of national identity contravened official strictures and versions of femininity.  Furthermore, Cook argues that costume romances are at the less reputable end of the historical film genre. Where ‘heritage’ historical films would celebrate the past, costume romances such as the those produced by Gainsborough, mobilize a British past of promiscuity, injustice and inequality, ‘a locus of crisis and conflict as well as sensual pleasure’ (Cook, 1996).

Cook also extends the films’ questionable representation of the past extends to costume and mise-en-scene. Sue Harper points out that visual codes in the costume romances have their own language, which often works against the ‘moralistic trajectory of the script’, creating a tension between spectacle and narrative (Harper, 1983: 1994). For Harper, spectacle plays a positive role in costume drama as the carrier of coded meanings which express the powerful status of femininity, overriding the narrative drive to disempower transgressive female protagonists.

As Pam Cook states, ‘Audiences leaving a screening of The Wicked Lady were more likely to remember the stunning image of a fetishized Margaret Lockwood dressed in highwayman gear astride a stallion than to take on board the moral implications of her punishment by death’ (Cook, 1996).

Harper, S. (1994) Picturing the Past: The Rise and Fall of the British Costume Film. London: BFI Publishing.

Do join us, if you can, for some classic British melodrama.