Working on The Lady’s Magazine can be a pretty heady experience. Take one magazine that ran for 13 issues a year for over six decades. Add a generous dose of content representing pretty much every single prose, poetic and dramatic genre you have ever heard of (and some you don’t like to admit you haven’t). Finish with the zest of a sprightly community of readers, almost none of whom used their own names within the magazine’s pages. The result: one dizzying cocktail that brightens up your day right up until the moment when the room starts spinning before your very eyes.

Today, after my latest binge on the magazine in preparation for two still not-yet finished papers I’m giving in quick succession next month, I feel it’s time to confess my sins.

My name is Jennie Batchelor. And I am a periodicalist. I sometimes say one thing and think another. I am beyond help. In fairness, though, it’s not really my fault. I mean, I know that old saying about workmen and their tools, but have you seen what I have to work with? I mean, come on! 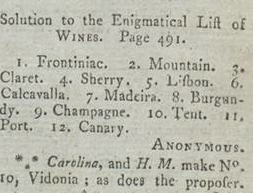 But I digress… This is how it happened. A couple of weeks ago I was sat at my desk having read through a big stack of interesting journal articles, chapters and monographs on anonymity and pseudonymity from the Early Modern period to the present. The goal was to contextualise and theorise my reading of the practice of pseudonymity in the Lady’s Magazine for a paper I am giving at an eighteenth-century studies conference in the US on a panel on the study of women’s writing now that we are in a ‘post-recovery’ moment. The abstract, which I sent off last year, promised to develop an argument that I had begun to sketch elsewhere: that anonymity and pseudonymity pose huge challenges not just to literary scholars but to feminist or women’s writing academics, in particular, and that we need to embrace these challenges enthusiastically. I maintained that the many hundreds of unknown women – the Constantia Marias and Lucindas – who wrote for the Lady’s Magazine and possibly had no more lofty career aspirations than publication within the periodical’s pages demand to be understood as an important part of women’s literary history, even if all we know about them are the presumably mostly false names they adopted.

As Virginia Wolf pointed out ‘Anon’ was all too often a woman. Of course, sometimes she was a man, too. And as the Lady’s Magazine suggests with dizzying frequency, sometimes she was a woman pretending to be a man, or man pretending to be a woman. Its readers commonly wrote in when articles by ‘A SPINSTER’ seemed more likely to have emerged from the pen of the most curmudgeonly of bachelors, or when the spirited defences of the fair sex by male wits seemed to speak more of insider knowledge than of chivalry. Nonetheless, as I contended in my abstract for the conference, I wanted to argue for the importance of the magazine in the history of women’s writing, even if some of its women were pretending to be or actually were men. The identities of individual authors interested me much less than their collective endeavours in the creation of a mixed-sex, but female dominated, dynamic writerly community which was not in the least hung up on the Romantic conception of the author as solitary genius and which set the agenda for the public discussion of women’s lives across the decades in which it thrived. (That’s the short and slightly simplified version, anyway.)

Yet for all my anti-Romanticist impulses (I told you this was confessional, didn’t I?), I still managed to spend about 6 hours on the day I had marked down in my diary as ‘anon research day’ trying to track down the identity of two women who I have become completely absorbed by in the past few months: Catherine Bremen Yeames and Elizabeth Yeames  (although every single one of their Christian and surnames is spelled or abbreviated in multiple ways in the magazine’s pages). They started writing for the Lady’s in the 1800s and as I was re-reading the issues from those years, I became intrigued by their many, varied and distinctive contributions, just as I was tantalised by the fact that they shared a name and both resided in Norfolk, which seemed to indicate that they were related to one another.

Who am I kidding? I also was gripped by the thought that they had to be traceable given that they had such an unusual surname, untypically given in full in the magazine, and that they were tied to a specific locale. If I couldn’t find these women then I may as well give up the attribution ghost entirely.

Needless to say, I found them. A typo I made in the last Google search I was going to allow myself of the day set me on a chain of web searching that led me to the baptismal records of the sisters (because they were sisters after all), details of their parents’ names and wedding date (not in Norfolk, but rather pleasingly for this project, just a few miles from my University in Dover) and the birth and christening dates of their many other siblings.

I became lost in the websites complied by resourceful and generous family genealogists, who with little interest in the sisters nonetheless gave off hints of important information that led me to understand that Catherine’s contributions to the magazine stopped because of her premature death as a young woman (the family trees I had seen her mentioned in wrongly assumed she died at birth), while her younger sister Elizabeth continued to write for the periodical for many years afterwards and looked expressly to it for help to support her family after the death of her oldest sister and her naval father overseas. Three months after this appeal, Elizabeth married, I discovered, and regardless of whether this helped her financial situation, she continued to write for the Lady’s under her married name (the connection to her unmarried self is not openly acknowledged in the magazine’s pages and would have been known to me had I not made the connection this way). It was a fascinating journey that took me to the will of the sister’s mother (unbelievably available online) and to Elizabeth’s own resting place, in a grave with her mother and another of her sisters. I even managed to get a photograph of her tombstone emailed to me later that day through another website for genealogists.

There is a lot more to tell about the Yeames sisters and a good deal more to say about their writing. I’m not done with them, that’s for sure. So watch this space, as they say. Yet I confess, that on my ‘anon research day’ I felt bad rather than amused by the irony that I spent so much time obsessively trying to find out exactly who two women periodical contributors were that I forgot to eat lunch and only remembered to pick up my kids with five minutes to spare.

I really don’t believe that our research project needs to attribute huge swathes of articles to known or important writers to put the Lady’s Magazine on the academic map. Even to attempt to do so would, as I’ve already hinted, be rather at odds with what I think the magazine was about and trying to do. Nor do I believe any less in the importance of pseudonymity to the magazine or to the history of women’s writing for all my determination to seek out the identities of some magazine contributors.

I like historic periodicals and I believe that many of them are deeply important because they keep me people like me on toes by forcing me to question my and ‘the disipline’s’ logic and familiar crutches – of genre, gender, politics, period, and ‘the author’ – at every turn. Ephemera indeed!

3 thoughts on “Confessions of a Periodicalist”