At KBS we have the opportunity to spend one year of our studies (after the second year) on a placement in a paid professional capacity allowing us to gain practical experience in a position of our choice. My placement role at a large organisation in which I report for the Global Supply Chain Team faces some issues which touch on topics that the KBS CSR module covered.

One of the key components of business ethics management and an important way to communicate with all stakeholder groups regarding the performance and impacts of an organisation is through reporting (Crane and Matten 2016). There are a number of international programmes setting standards regarding reporting (such as SA8000 and GRI) which aims to provide guidance to companies on how to report while enhancing their accountability and providing a response to internal and external stakeholder pressures (Solomon and Lewis, 2002). However, it seems that when it comes to internal pressures one needs to understand the power dynamics across internal teams and the purposes that they aim to serve before addressing the ethics of reporting. For example, an inherent conflict seems to exist between allowing employees the freedom to ensure that accurate reporting takes place, compatible with a strict financial control environment, versus the desire for people in marketing and in leadership positions who wish to make reporting as favourable as possible. This conflict comes to a head when it gets close to the end of the year when there is little room for optimistic forecasting. This is because any significant changes in reporting (including the future forecast) will be closely scrutinised and the benefits of a realistic and strict control environment start to become much more important rather than optimistic reporting. As a result of attending the CSR module I became familiar with the differences between misleading, deceptive information and puffery (Crane and Matten 2016). I thought that such differences would be associated only with product promotion and within marketing communication functions. I was surprised that these distinctions can surface in other functions of the organisation such as in reporting in the supply chain. Observing the internal conflict and reflecting on the situation I would see as beneficial for employees having the opportunity to share their concerns internally if ‘puffery’ moves to the category of ‘misleading’ information for example. I recall a presentation by one of our guest speakers, Daniel Johnson, the Research Hub Manager at the Institute of Business Ethics (IBE), who emphasised the importance of ‘speaking up’ to your manager, to the ethics team and to the speak-up line in order to inform them of your concerns (Johnson, 2016). This is an important aspect that comes as part and parcel with the code of ethics.

Reflecting on the company’s code of ethics and its use, unfortunately it does not seem to be a ‘living code’ as Daniel Johnson emphasised in his presentation when he quoted research that was presented in the Journal of Business Ethics:

‘ … the mere existence of a code alone will (be) unlikely (to) influence employee behaviour, and companies merely possessing a code might legitimately be subject to allegations of “window dressing”.’ Schwartz (2004) 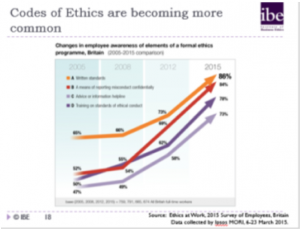 The Institute of Business Ethics conducts a tri-annual Ethics at Work survey capturing the change in the views of employees on how the organisation is conducting its business (Johnson, 2015). As the figure indicates there was a rise in the formal ethics programmes in British organisations. The highest is the written standards (86%) and lowest training on standards of ethical conduct (73%). The findings in the report suggest that in organisations where all types of formal ethics programmes are offered the employees report that honesty is always practices in the organisation, that they have not been aware of misconduct in the past year and they have a more favourable view of the organisation’s culture.

In the case of the organisation that I work for the code of contact seems to be mostly concept-based, promoting innovation, customer value and making everyone feel welcome. Although there is formal training in place, the content lacks practical examples on key ethical challenges. Perhaps it would be more useful to combine ethical values with the business values that are already emphasised and apply the concepts in cases that would refer to specific roles, departments and teams, hence contextualising the ethical challenges that employees face in different circumstances. Due to the ‘high-levelness’ of the code of contact objectives and the emphasis on favourable financial (and other) results associated with internal promotions, levels of compensation, provision of good references there seems to be a ‘lock-in’ effect for individuals, given the absence of incentives to promote ethical behaviour in the workplace. The company seems to promote organisational ‘harmony’ (Crane and Matten, 2016) that by itself produces ‘moral muteness’ (Bird & Walters 1989) given the absence of ethical language and ethical framing of the issues. Hence, the company seems to prioritise efficiency, effectiveness, productivity and image rather than aiming to promote ethical thinking in the workplace.

Given how much I enjoyed the CSR module and I was an active participant in the guest lectures, submitting views in the ethical dilemmas moodle forum it is emotionally challenging to observe instances where reporting is somewhat disingenuous and could be characterised sometimes as ‘window-dressing’. Being just an intern it is very hard to raise such issues especially given the absence of anonymous speak-up lines. Hence, for now I consider this as a learning experience that prompts me to think what I would do better in the future.


The first thing is that I can see there is a definite clear line between favourable reporting and dis-ingenuous reporting. Secondly, in order to promote organisational pride in ‘humble’ reporting as opposed to dis-ingenuous reporting strong internal control processes should be put in place where fact-checking, for example, should be a strict priority. Finally, I would suggest setting-up speak-lines of communication to encourage employees to be vigilant in all cases and promote ethical framing of the issues.