The overriding intent behind the performance is to ‘make it new,’ to make the piece sound as modern as possible. Now, before all you historically-informed authenticity-types run shrieking from the room, I should perhaps qualify that statement: the idea is to present the piece in such as way as to make the audience feel as though it is new. The Gloria is so well known, our idea is to make the listener hear it afresh – they might not have heard the upper-voices version, which may well have been familiar to  audiences during Vivaldi’s lifetime, or they might have forgotten just how shockingly dissonant the second movement is, or how Vivaldi tries to trip you up  rhythmically at various points; there’s the tension between the solo alto and the chorus in the Domine Deus, Agnus Dei which creates moments of high drama, or the sudden weightlessness as the alto enters poised on the brink of nothingness; or the dynamic drive of the Domine Fili unigenite and the light-footed, darting rhythms in the Qui sedes. We want the listener to discover new aspects to the piece, or remember its fiercely inventive qualities, that may have paled over the years of familiarity with it. Last night was spent, therefore, making the piece sound as vital, as alive and challenging as possible. From the brilliant opening cry of the chorus, through the pastoral intimacy of the central Domine Deus to the fervent finale, we built a revitalised reading of Vivaldi’s masterpiece, which we will unleash in the Crypt this coming Friday. Combined with the exploratory first half – choral pieces across the centuries, from Hildegard von Bingen to Veljo Tormis – the concert promises to be something quite special.

The next time the Choir sings, it will be in the historic, mystical surroundings of the Crypt; we’re very excited at the prospect. See you there…

With the start of the new academic year, it’s an exciting time to be launching our new vocal ensemble, Minerva Voices.

An auditioned group of twelve female singers, the ensemble began rehearsing last week ahead of a busy schedule of commitments this year, which includes performing in the University Carol Service in December and in the Crypt of Canterbury Cathedral in February. The repertoire the choir will be building ranges from the medieval mysticism of Hildegard von Bingen to contemporary works, via the radiant glory of Vivaldi’s Gloria in the upper-voice incarnation not often heard, but most likely to have been performed in Venice at the Ospedale della Pietà at which Vivaldi worked. 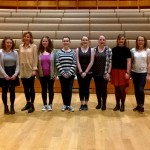 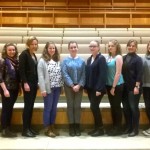 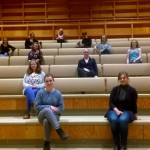 Members of the Choir include Music Scholars, returning second-year students and fresh-faced first years; our first two rehearsals have looked at music by Hildegard, Brahms, Tartini, Chilcott and the first two movements of the Vivaldi already. As I explained to the choir, repertoire will come at them fairly swiftly over the first few weeks, in order for them to grasp the musical geography and scope of this year’s programme; it can be daunting to be sight-reading so much music from the start, but the rapid turnover means people will (hopefully) find something that they like amongst the music, at least! This year’s assistant student conductor is third-year Music Scholar, Joe Prescott, seen here in action leading the warm-up session last night in typical charismatic fashion. It’s been a dizzying start to the choral year for the choir so far, but we’re looking forward to the year ahead. We’ll be following the group’s progress over the year here on the blog, and look forward to sharing the highs and lows of our choral year with you through rehearsal to performance.

With only eight more weeks until our annual concert in the Crypt of Canterbury Cathedral, our programme is really beginning to come together and the ensemble sound develop.

Reflecting on our first two rehearsals after the Christmas break fills me with great excitement. It was really difficult to predict how the first rehearsal back would go, with the choir not having sung together as a full group since the University Carol Service at the beginning of December. On top of this, much of the Crypt repertoire had not been rehearsed since late November and so returning to it could have been like starting from scratch again. The first piece that we looked at was Chilcott’s arrangement of Steal Away; a very colourful piece that is driven by supported breathing and the motion of the sustained pedal notes in the male parts. To this end, we began the warm-up by lying on the floor and doing some very long breathing exercises. The idea of lying down to do this is that it encourages you to breathe from your diaphragm and directly from there rather than your chest. The sound of the ensemble had stuck from before our long break, and the colourful chords really pierce the great acoustics of the Colyer-Fergusson hall where we rehearse.In complete contrast to the tranquil Steal Away we have also spent time rehearsing Rutter’s arrangement of Dashing Away with the Smoothing Iron and Lassus’s playful Rooster-Fight Chi Chi Li Chi. Dashing Away is deceptively difficult in terms of rhythm, and we spent much of last night pulling the first three verses apart making sure that each part had the confidence to attack each rhythmic phrase. After debate over whether to sing “Dash-ing” or “Da- shing” and making sure we don’t sing on the beat during syncopated sections, we began to bring the piece up to performance pace, which filled me with lots of excitement. It is such a playful piece!

We made more progress with Chi Chi Li Chi which can only be described as a piece like no other that I have performed before. Telling the story of a Rooster-Fight through singing and other vocal noises (come along to the Crypt and you will understand more…) is great fun, but also very challenging. There are constant meter changes and the opening section has a rather lethargic feel to it.

As we are now beginning to rely on the piano much less, we can begin to pull pieces apart and the choir are really growing in confidence. We have an all day workshop ahead of us, which will be another opportunity to bond as a choir and to develop the unique sound that we are already producing.