And so, the Chamber Choir’s first public concert has suddenly come and gone. After all the preparation, the eager anticipation and excitement, the Advent sequence evaporated in a whiff of Christmas spice. 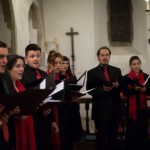 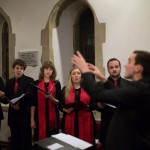 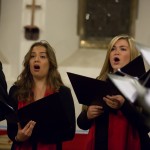 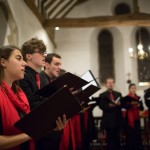 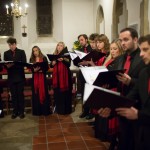 With the first unfolding of the Advent antiphon into the church of St Damian and St Cosmus at Blean, we well and truly ushered in the season of Advent. Carols, readings, poems, ancient plainsong – all combined to bring about a time to contemplate different aspects of this period of the year. Because, after all, that’s what concerts do; they create a defined moment out of the humdrum of normal routine, away from the daily concerns of life, and offer a chance to experience time-out-of-time. For a brief moment, time is governed not by the remorseless ticking of the clock or by timetables, schedules and commitments; instead, time is dictated by the crotchet pulse of a carol, or the lithe agility of a piece of plainchant, or in the measured metre of a piece of poetry.

After the concert, there was a definite sense of achievement, of pride in what we’d achieved; it’s a big step between all the rehearsal preparation to delivery in performance, and nothing can quite prepare an ensemble for that crucible of performing in public. Our next commitment is in Canterbury Cathedral on Monday, for the University Carol Service, towards which we are all looking forward.

There was an eager sense of anticipation at last night’s rehearsal, as we gathered in the church of St Damian & St Cosmus, in Blean, for our last evening rehearsal ahead of Friday’s Advent concert. At last, we were taking the repertoire for the concert and running it in its entirety, including all the readings, in the space in which we’ll be actually be performing.

The church itself glowed with a gentle light as we all drove down the country lane towards it in the darkness. Spilling out into the crisp, chill November night, you could sense the excitement growing, coupled with a real sense of the Advent season’s imminent arrival. Gathering in the church to lay out the chairs took some time, as we gave crucial consideration to key ideas – could we stand throughout the whole concert ? If we sat and stood again, could we do so without looking ragged ? And why is the Carols for Choir compendium so darn heavy ?

It’s become apparent that Deck The Hall is something of a showpiece for this year’s Choir, the best we deliver best, so this was the first piece we sang, in order to set a benchmark for our standard of performance; then we launched into the first Advent antiphon, and we were off. As Matt took his turns to conduct each of the carols he is directing in the concert, I took the opportunity to stand at the back of the church and listen. I learned immediately that all those hours spent working on ensemble, on clarity of diction, on getting the consonants in the right place and on the right beat, had paid off: the ensemble was terrific. When a group is performing as one, the effect is electrifying. Moving between music and poems, the magic of the combination of music and spoken word began to blossom, and one could see a dawning sense on some of the singers’ faces that the programme was coming together. At the end of the run-through we took an interval, and Matt and I took stock; he was equally as excited as I was that things were really starting to come off the page. There had been a few moments where the antiphons hadn’t quite gone in the right direction or had seemed to drag, and we used the second half of the rehearsal to try to limber up the plainchant, instilling a greater sense of freedom to capture the ebb and flow of the phrases. Some of the intonation in a few carols needed checking, and Matt went over how some of his pieces will begin – beats given, note pitched – in order to get them to start with greater commitment. The most challenging part of the entire evening occurred next, when we practiced lining up in pairs and processing on, and how to sit and stand. As one of the sopranos pointed out, one needs to sit attentively during the readings; the Choir is still on view behind the reader, and needs to look engaged rather than shuffling through their music to find the next piece, or gazing off in some private reverie.

Ten minutes after the rehearsal finished, everyone had collected their belongings scattered amongst the pews and left. At ten o’clock on a November night, I found myself standing outside the darkened church beneath the stars – there is no street-lighting in this part of Blean, and the darkness descends swiftly, rendering the night-sky clear – reflecting on the previous three hours. We’d taken a good step forward, now starting to get caught up in the momentum of the programme and following its various narratives through music and readings; the key will be to maintain this through until the concert on Friday evening.

The season of Advent has well and truly begun over last weekend. In fine voice, the Chamber Choir rose to the match the occasion on Friday and delivered a performance rich in nuance, flexibility, and with a unity of ensemble that at times made them sound as one voice. All the aspects upon which we’d worked in rehearsals – dynamics, diction, flexibility – came out.

In the rehearsal earlier in the afternoon, we’d practiced the pieces, of course,  but more importantly, we’d rehearsed processing in and out and bowing. As I said to them, the performance starts the moment the group processes into the performing space; you win or lose the trust of the audience in that moment, in the manner in which you take command of the space, the way in which you hold yourself as you walk on. Walk with confidence, and the audience will immediately trust that you are about to deliver a performance equal in confidence. Walk on sloppily, self-consciously or nervously, and you communicate that sense to the audience and lose their trust in you. No matter what happens afterwards, walking into the performance governs their initial reaction and trust in what follows.

We also rehearsed bowing. In focusing so much on the pieces, on performing, It’s easy to overlook what happens after the singing stops. If you deliver a polished programme, it can be tarnished by losing discipline in bowing and leaving the performing area; a good group carries high standards of professionalism right through until it has left the public eye. There was some mirth over whether to mutter ‘Have I cleaned my shoes ? Yes, I’ve cleaned my shoes!’ in lowering and raising one’s head or to use ‘Down, two three – Up, two three!’ instead. Then there was confusion (and much hilarity) over whether, whichever phrase one used, one lowered the head over the length of the phrase (‘Have I cleaned my shoes ?’), or whether one whipped one’s head down straight away on the first word (‘Have’) and then immediately up on the later word (‘Yes’), which could potentially result in whip-lash. With such issues are pre-concert rehearsals concerned…

In the waiting-room outside the church, Steph led the warm-ups and we sang the first antiphon and our trusted Remember, O Thou Man to focus our minds on the opening of the concert. When we filed into the back of the church, preparing to process down the middle, we were greeted by a packed audience; from outside, candle-flames flickered and danced a warm orange halo at the windows, and the atmosphere inside was electric. As the first Advent antiphon rose into the rafters, I was immediately reassured; the sound was confident, the ensemble was secure, and the group was about to deliver a fine performance. As the text of Steve Martland’s carol puts it, ‘Make we joy now in the fest,’ and we certainly did.

Congratulations and thanks to everyone who participated, to the choir, readers, those who manned the ticket-desk, to Janet and Tim for their help with setting the church, to those who ran the post-concert refreshments and the nocturnal parking arrangements, and to Stephen Laird for the invitation to perform. Advent has begun.

It’s official: we’re going to be standing in mixed-voice formation for the concert next week. All mixed up: and loving it!

Working on the programme in rehearsal last night, we made the decision to run the entire session standing in mixed voice-parts, as we’re keen to develop this aspect of our performing, with a view to trying it out a week on Friday. A decision not without challenges, especially given that last night’s rehearsal was the first time we’d been in the church in which we’ll be performing, and given also that some of the Choir were seeing the music for perhaps only the first time, and we were three members short due to illness. (Look after yourselves, people, between now and next Friday!).

Some of the pieces were very good: the three that we’ll be singing in the Cathedral in December in particular are in robust health. Some are finding their way off the page a little less quickly; the up-beats in the soprano melody in The Angel Gabriel need taking firmly in hand in order to give each verse a confident start, which then reassures the accompanying voices that they are also coming in correctly.

In the Bleak Mid-Winter by second-year Rachel Richardson is beginning to ebb and flow nicely – and even had the composer’s approval last night! – as the voices become gradually more secure.

Steph Richardson stepped out to direct two pieces; the carol It Came Upon A Midnight Clear is developing well, but just needs more commitment to the story-telling; there’s a mixture of intimacty and celebration in the words that the group really needs to communicate. Carol of the Bells is a delight, and promises to be a highlight.

The biggest challenge left to us is the Martland carol; the refrains are beginning to develop a lively dance-feel, together with the dynamic markings that lead through a gradual crescendo as the phrase ‘Make we joy now’ is repeated. The verses, however, require supreme confidence both in knowing where the melodic line is leading, as well as in the words, a blend of Latin and English. I can see where the focus of our last few rehearsals is going to be…

In contrast, I proved myself to be utterly redundant in Remember, O Thou Man; as a test of the unity of ensemble, the choir faced not inwards but outwards, away from each other and unable to see one another, and sang the piece through. They have such a firm grasp of the piece that they sang without needing any conducting at all; listening to one another, breathing together and sure of the tempo, they delivered a pinpoint-perfect rendition that had them moving as one. It’s at this point that I feel my work is done.

Speaking to Janet, the extremely helpful Church Warden who looked after us last night, there’s also the possibility that the church will be candle-lit for the concert. Fingers crossed that this might be so: it would create a wonderful atmosphere…

A few rehearsals left before the day; some fine-tuning to do (and Martland to instil!), but we’re on track.