As part of its programme of contemporary works this year, the University Chamber Choir has been developing Blest are the Pure in Heart, a strikingly colourful anthem by James Webb published by Chichester Music Press.

The piece reflects the tone of the text (Blest are the pure in heart, for they shall see our God) in revelling in the sparse beauty of the open fifth, first heard at the opening in the sopranos and altos; the tenors and basses reply with the same interval on the dominant, creating an overall chord built now on fourths; the upper voices re-present their initial fifth, prompting the lower voices to respond with another open fifth, now on the mediant, which creates a contrasting combined sonority of a first-inversion major seventh. The simple juggling and combining the same interval at different transpositions creates three different gestures within the first two bars – an evocative start to the piece, which then unfolds in a more melodic fashion, but with the harmonic language still underpinned by the prevalence of the open fifth. It’s as though the music is trying to work out how best to respond to its first chord, exploring options in order to find the most suitable; its dissatisfaction with the first two (wonderfully colourful!) choices becomes the catalyst for the rest of the piece’s gradual unfolding.

Later still, when the opening returns, the music unfolds to include a flattened sixth, a small harmonic moment of great expressive power; the piece concludes with a final presentation of the opening gestures which now resolve into the tonic major, but hovering in second inversion, giving the end a wonderful sense of weightlessness. 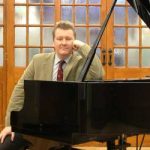 A former producer with BBC Radio 3, James Webb also won the inaugural  BBC Young Musician of the Year Composers Award in 1992; his music has been performed by groups including London Voices, the Delta Saxophone Quartet, and the Royal Philharmonic Orchestra.

At its dress rehearsal this week in preparation for singing at the University Carol Service in Canterbury Cathedral next month, the Chamber Choir made a recording of the piece:

We are very much looking forward to performing this work in the resonant acoustics of Canterbury Cathedral and elsewhere as part of the Choir’s repertoire during the course of this academic year; it will work especially well in the evocative surroundings of the Cathedral Crypt in May.