The Chamber Choir had its termly workshop day on Saturday, a concentrated rehearsal period that offers scope to work for longer than our customary weekly two-hour period, and really drill down into the nitty-gritty aspects of the music we’re singing this year.

This year’s assistant conductor, second-year Doug, roused the Choir into an early Saturday state of wakefulness with a series of technical warm-up exercises, before moving in to rehearse the group in Tavener’s The Lamb. The piece sounds deceptively straightforward, hiding the angularity of the lines that weave around one another in ever-changing intervals and palindromes. We then worked on two Italian madrigals, one of which is Lassus’ The Echo Song which creates the illusion of a choir playing with (and mocking) its own echo, throwing material antiphonally between two choirs and which we’re hoping to exploit spatially to the full in the concert in the Cathedral Crypt in the spring. 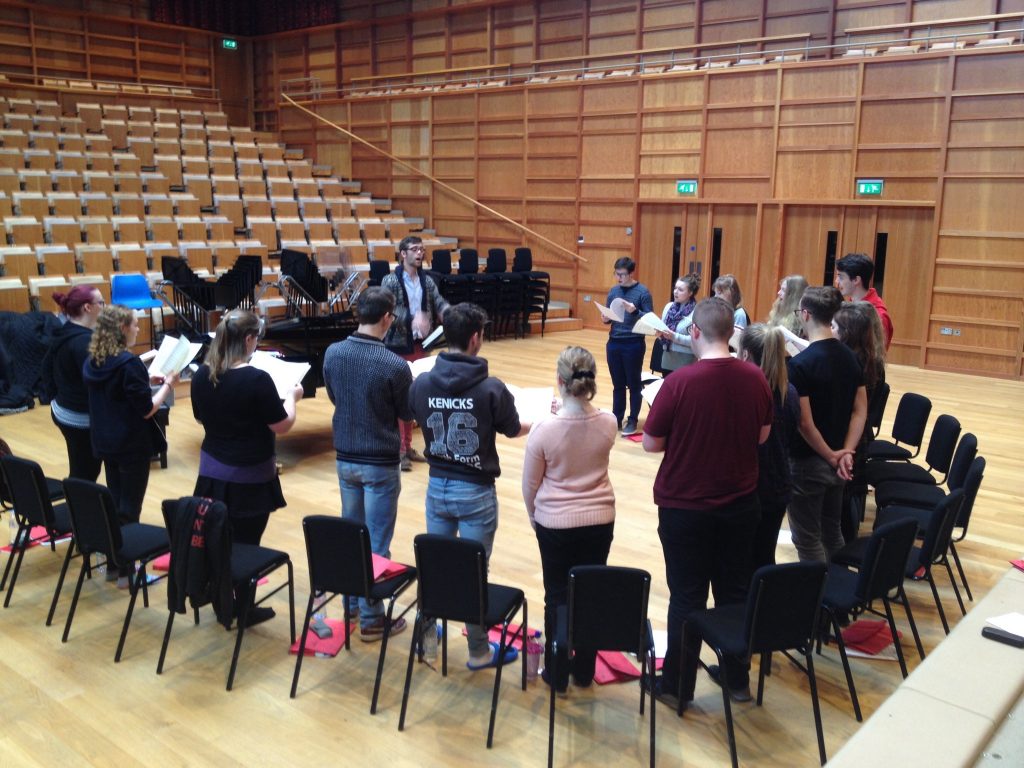 Perhaps the most rhythmically challenging piece we are performing this year is Augustinas’ Tykus, Tykus, which again pitches two choirs aganist each other in rapturous and cascading sections, driven by a fierce, almost tribal energy. We initially rehearsed in individual choirs (the other choir going for a well-earned tea-break), followed by putting both choirs together. You really have to know exactly where your line enters during this piece, with short phrases often scattered throughout the texture coming in on the half-beat; and the fact that we’re also singing in Lithuanian creates additional, linguistic hurdles for the choir to face.

In contrast, Doug took the choir through Purcell’s solemn Thou Knowest Lord, which has spaces in the music of heightened dramatic tension, as the Choir beseeches God ‘shut not Thy merciful ear unto our prayer.’ The morning ended with Warlock’s Lullaby, My Jesus, arranged by Andrew Carter, full of yearning chromaticism in the inner voices that need to be delivered confidently if we are to deliver the quite astonishing dissonances which Warlock unfurls throughout this highly expressive carol.

Lunch was dominated by the eager anticipation of this year’s home-made quiche made by Matt; last year, Inger had set the bar high and there was some pressure, but I’m pleased to say that Matt’s was every bit as good – at least, if the fact that it apparently disappeared extraordinarily fast is anything to go by. 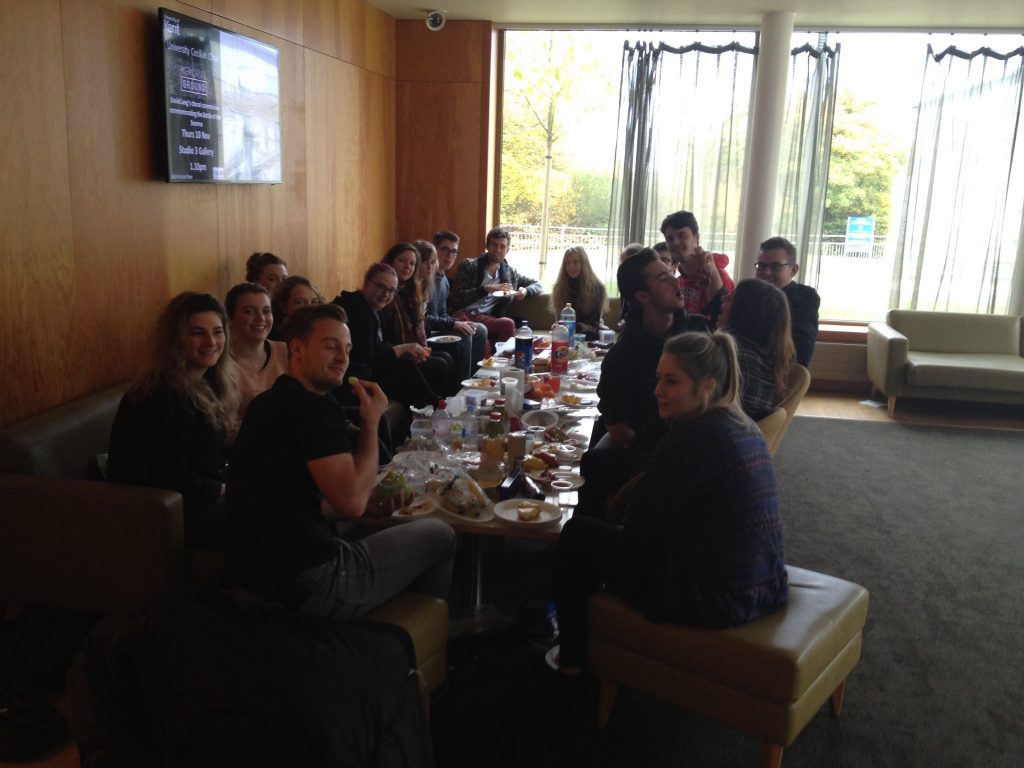 Great expectations from Quick Captain Matt and the Choir at lunch

Amongst the repertoire we rehearsed in the afternoon, the hynotic, dancing lullaby (a recurring theme amongst repertoire this year) And by Alec Roth; another two-choir piece, it combines circling ostinati with bell-like cluster-chords in a lulling opening, supported behind by sighs and sussurations in the second choir in a soundscape mimicking the sleeper’s breathing. Doug’s third piece, Hassler’s Cantate Domino, combines lyricism with a sprightly triple-meter middle section, which the choir is starting really to enjoy. 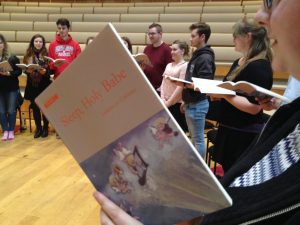 We ended by playing with space in a literal sense, arranging the choir around the balcony of the concert-hall to sing Alexander Campkin’s carol, Sleep, Holy Babe. This is all about removing the safety of singing in close proximity, encouraging each singer to sing confidently, committing to their line and developing a rich ensemble sound.

Panoramic shot of the spaced-out choir…

This took some getting used to, but when the Choir came back together to sing in formation, the effect was immediate; the singers felt more confident standing together, but still sang with the commitment to the voice-parts, and the result was a fuller sound. The Choir will be singing the piece next month in Canterbury Cathedral, so it’s important that they grow accustomed to filling quite a large space…!

It’s customary, on workshop days, to do the latter part of the day in concert-mode, i.e. with the dress-code and performance folders that we will be using on the night; it’s a particularly effective means of focusing the Choir’s attention on the fact that they will soon be performing in public, and to start getting used to standing, holding ourselves as a group. (It also allows everyone to check they have the right clothing in the right colour…). It definitely creates a mock performance condition, as we head towards our first engagement, singing in the Nave of Canterbury Cathedral to over a thousand in the congregation in the University Carol Service next month. 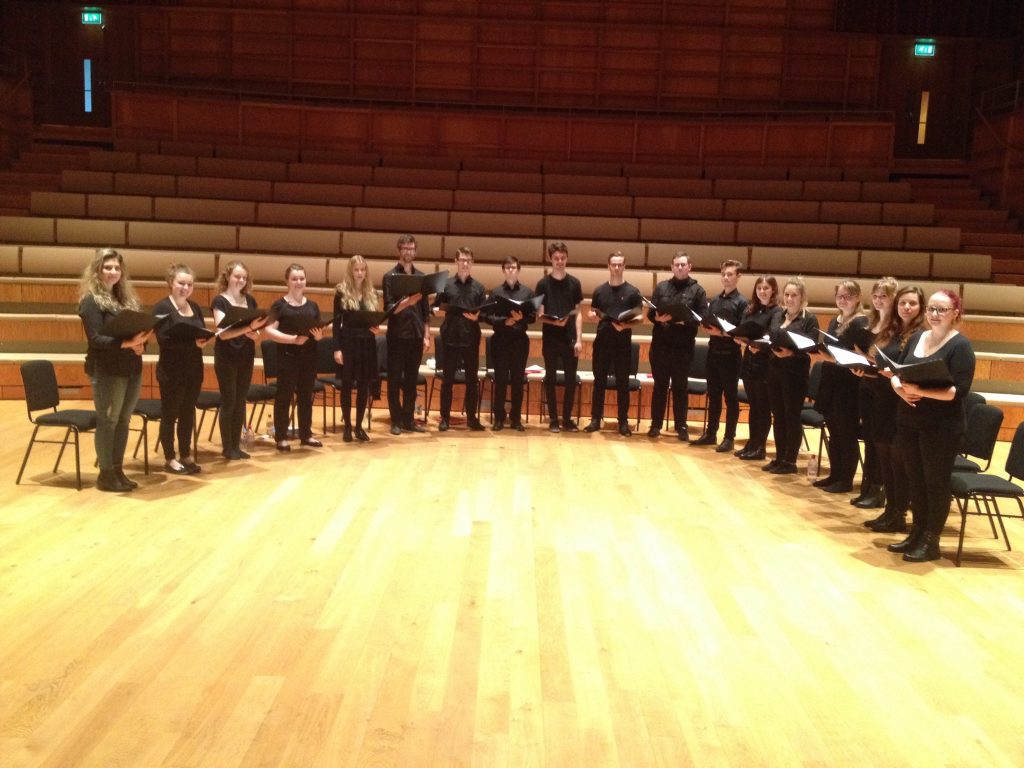 Getting into performance mode

The afternoon ended with the Choir learning a carol, Sleep My Jesu, written by Jamie W Hall as part of a seasonal initiative to raise money for Macmillan Cancer Care under the #choirsagainstcancer hashtag. The choir took the piece up very quickly, and half an hour later we recorded a performance as a means of participating in the nationwide project to raise money for this very worthy cause. Considering that this was only the fourth time we’d sung through the piece, and the second without the piano, the group picked this up very quickly indeed! (Find out more about the initiative or make a donation here).

My thanks to all the singers for their hard work on Saturday, and for giving up a large part of their weekend to rehearse; we all came away afterwards with the sense that we are really starting to find our feet as an ensemble. There’s still some way to go, but we are heading in the right direction…