You can tell that we have performances looming; our rehearsals are coming thick and fast, none more so than Saturday’s all-day session. These lengthier rehearsals are infinitely more useful than our customary two-and-a-half-hour weekly meetings, as they allow for more concentrated, more sustained working. You have time to develop the whole process –  looking at notes through balancing chords, to shaping, dynamics, placing consonants, making sure vowel shapes are correct, unity of ensemble sound, time really to get beneath the skin of the music far more in longer rehearsal sessions; and over more pieces, too. 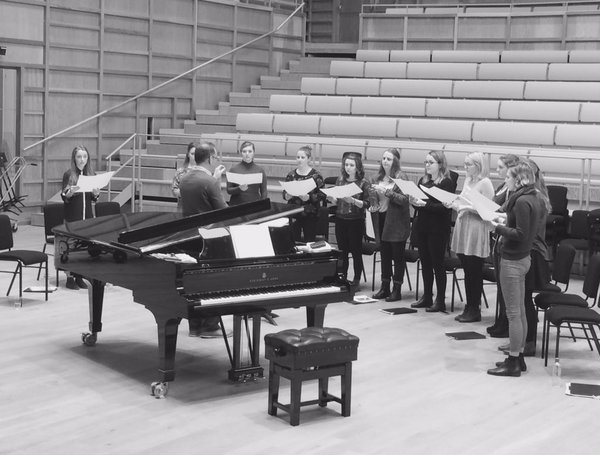 Saturday therefore allowed us to immerse ourselves in the repertoire for our looming performances, and showed us aspects of the programme that hadn’t been apparent before. A long look at Tartini’s Stabat Mater, for instance, ended with the Choir singing the whole piece through for the first time, and we discovered the piece has an emotional scale and drama far outweighing the scope of its slight appearance on the page. Moving between radiant, three-voice colours and the stark simplicity of plainsong in its setting of the agonising text reflecting on Christ’s Mother weeping at the foot of the Cross, and a yearning to share in Christ’s passion, the music demands sustained concentration in order to bring out the tone of the text as it unfolds.

We also pieced together, for the first time in its entirety, Veljo Tormis’ Spring Sketches, a beautiful set of short songs evoking various nature-scenes – the ebb and flow of the sea, apple-blossom, the colours of the evening sky, the warmth of late spring and the echoing cuckoo-call. There are some ravishing chords at various places in the suite, which need careful balancing if the colours are to come forth. Assistant conductor, third-year Joe Prescott, also took the Choir through pieces by Mozart, Brahms and Cornysh’s Ah, Robin. 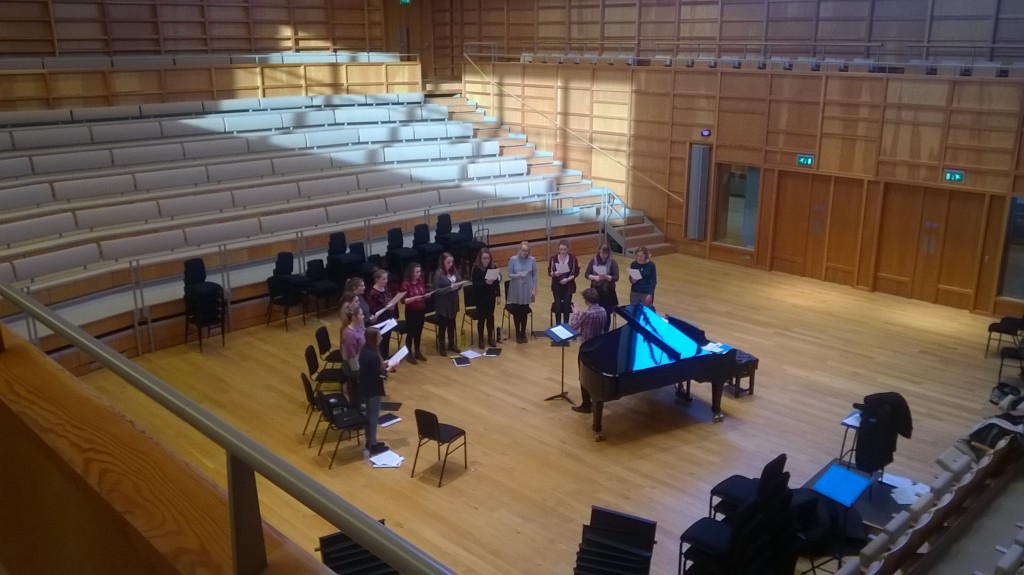 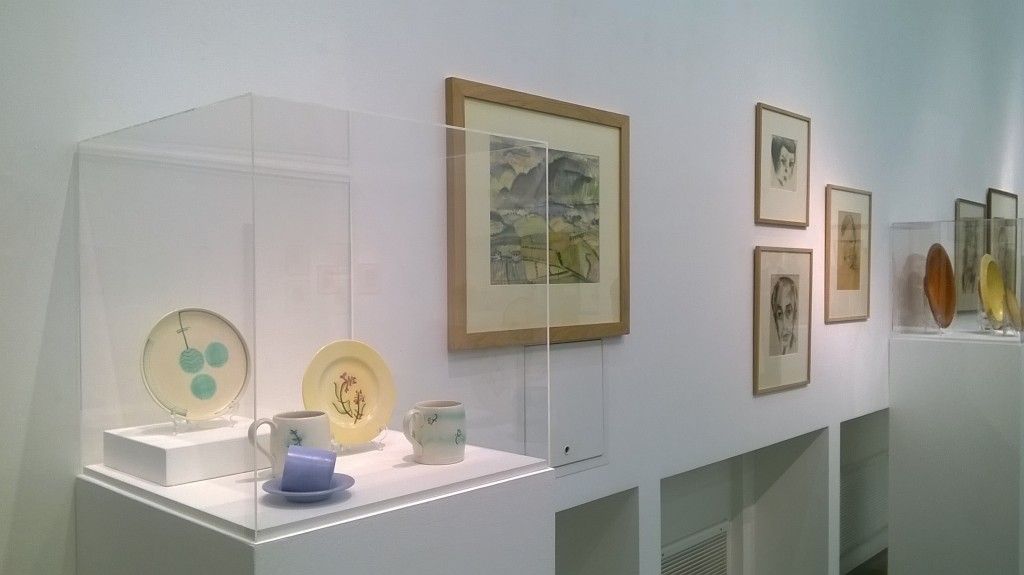 Mid-way through the afternoon, we decamped to Studio 3 Gallery, the venue for our first concert on Friday 12 February, in which the Choir will perform amidst the backdrop to the gallery’s new exhibition, After the Break, which exams the work of two artists, Grete Marks and Kurt Schwitters, who both fled Nazi Germany and came to settle in England. There’s something highly atmospheric about performing amidst visual art – the rapport between the two media means you experience the music differently in the context of the artwork, and your response to the artwork is different in the context of music. 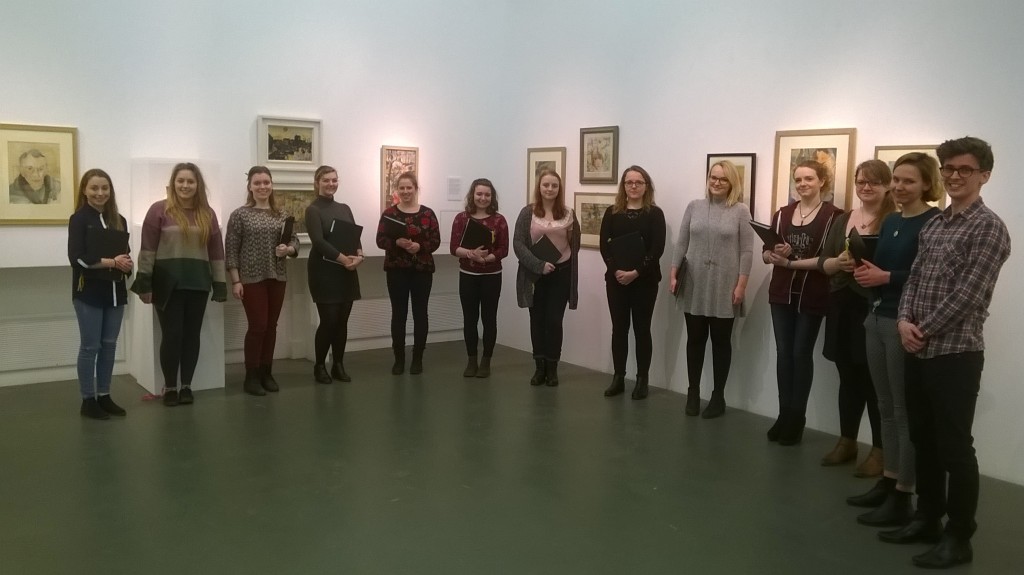 The Choir rehearsing in Studio 3 Gallery

We arranged ourselves in the corner of the gallery, and started to sing what will be the first piece in the programme, a Kyrie by Hildegard von Bingen. We reached the end of the first phrase – and stopped. The rich acoustic of the gallery had blossomed as that first phrase unravelled, lifting and filling the space, and there was a sense immediately that time had turned, travelling back over a thousand years. 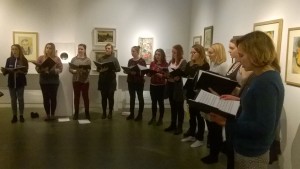 It was a remarkable moment.

You could see on the faces of the singers that something had just occurred, something unexpected, something quire powerful. There was a pause, and then an excited buzz went around the room; this gig is Going To Work!

We spent the remainder of the afternoon running through the entire programme, from that skirling Kyrie and ending with the dancing Song of the Stars by Bob Chilcott. Clothed in the sonorous acoustic of Studio 3, the ensemble had a much more vivid, unified sound; and in fact we discovered that we need to tailor the louder sections somewhat, in order not to overwhelm the listener! But we can also go very much quieter in the softer passages, really draw the audience to us and make them listen. 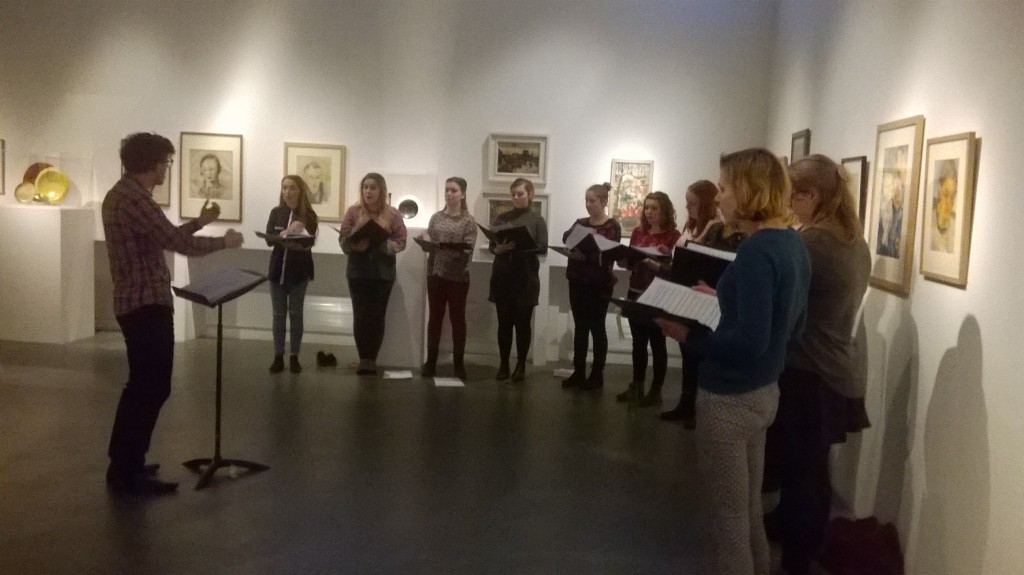 All in all, then, a good day’s work. And first-year Alice S’s cake-making skills were in evidence yet again – there was some pressure to live up to the excellence of her contribution to lunch after the success of her effort last term, and it seems she didn’t disappoint this time around either. We pick up again tomorrow night, in a steady build-up into both concerts this month, and at last the pieces are starting to bloom. Come and here them for yourselves…