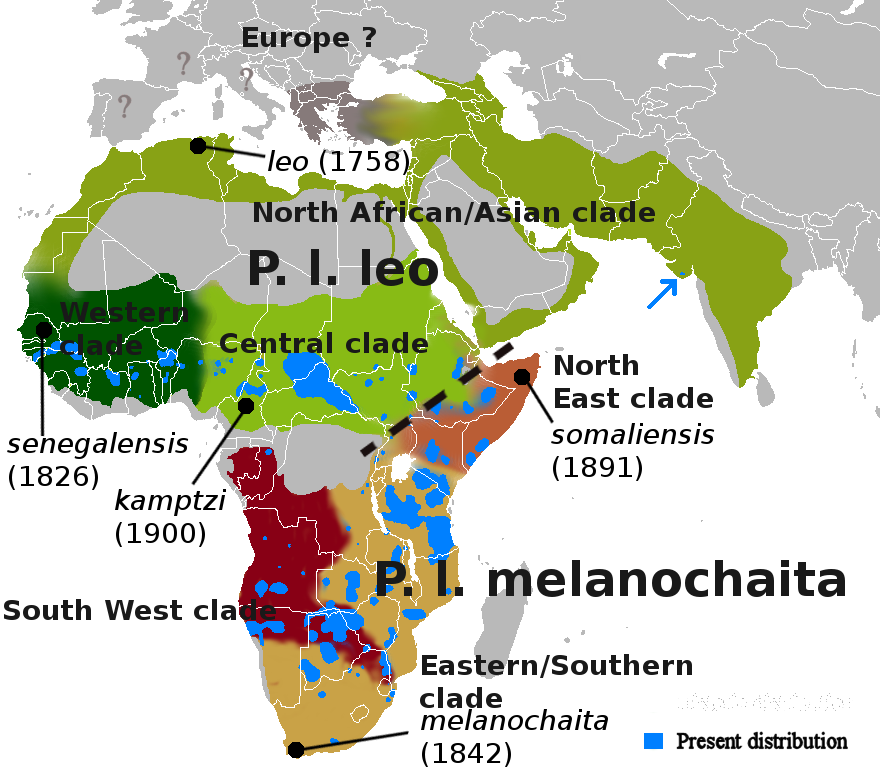 Until recently lions were colloquially split into various geographic grouping, often supported by characterisations from natural historians and hunters of the time variously covering ‘biggest’ , fiercest’, ‘tamest’, ‘most cowardly’ and so on. Historically names followed a range of different local clades, the Cape lion, Indian lion, Senagalese lion, Persian lion (sometimes known as the Mesopotamian lion), Nubian lion, various groups across central and eastern Africa and of course the Barbary lion.

The northern species is the nominate species – first encountered by scientific classification as the animals were present and encountered in the accessible landscapes of antiquity around the Mediterranean. However in today’s global population the northern subspecies only accounts for 10% or less of the global lion population (much less if we include captive lions).

The diminishing micro-populations of lions in West Africa today mimics the decline of the Barbary lion in North Africa – can lessons be learned? For example in Senegal, the lion is the national symbol and the ‘name’ of the famous national football team. How many lions live in the wild in Senegal – less than 50.

And what of the supposed captive lions from Morocco – the likely descendants of the last Barbary lions? Well they may represent nearly half of the captive collection of all northern lions. If we ignore these animals it will be to our peril.

Lion conservation in captivity has, perhaps run a full circle in 50 years since Hemmer and Leyhausen raised excitement about the lions being moved from the King of Morocco’s collection in the Royal Palace in Rabat into new enclosures in the city zoo.

Lion populations in the wild have certainly more than halved since then, possibly are at a quarter of the levels in the 1970s.

Are we ready to use what knowledge and resources we have to turn things around?

Black, S.A. (2016) The Challenges and Relevance of Exploring the Genetics of North Africa’s Barbary Lion and the Conservation of Putative Descendants in Captivity. International Journal of  Evolutionary Biology Article ID 6901892, http://dx.doi.org/10.1155/2016/6901892