This week (6th February, to be exact) marks 100 years since women first gained the right to vote in the United Kingdom. This anniversary is being celebrated across the country and online using #Vote100. Of course, this also gives those of us lucky enough to work with historical collections a chance to explore women’s history in our holdings, so we’re going to be highlighting some of our favourite stories and figures over the next month.

Today, our attention turns to the British Cartoon Archive and a somewhat unexpected supporter of women’s rights – the artist W.K. Haselden…

W.K. Haselden (1872 – 1953) spent most of his career as a cartoonist at the Daily Mirror newspaper, as well as drawing theatrical caricatures for Punch magazine. Haselden is most well known for his art during the First World War – his characters ‘Big and Little Willie’, which mocked Kaiser Wilhelm and his son, were tremendously popular.

Haselden is also famed for shifting his cartooning style from political satire to social commentary. The Daily Mirror, which Haselden joined in its founding year of 1903, was created as a newspaper for women – it focused on human interest stories and had a visual format filled with photographs and images. It is no surprise, then, that women feature heavily in Haselden’s cartoons as the Edwardian era progressed and gender roles were debated extensively in a changing society.

Haselden was broadly flattering towards women, and much of his work suggests that society might be a more pleasant place if women were involved in men’s work, as this cartoon from 1915 shows: 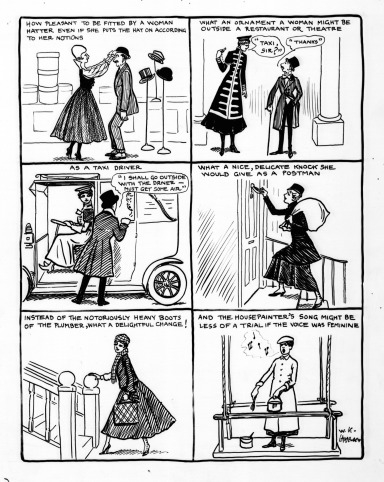 Haselden drew on domestic life to highlight the increasing blurring lines between the private and public realms. In 1916’s cartoon ‘Why women may not be lawyers’, ladies’ ability to have the last word proves frustrating in a judicial context: 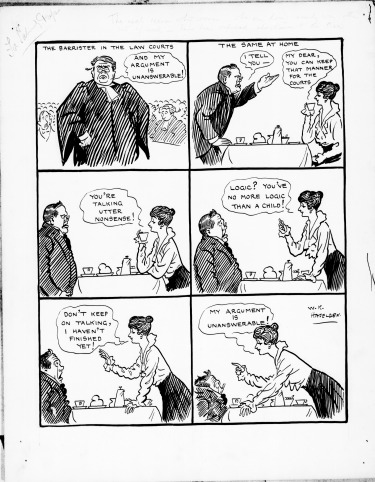 Haselden was critical of some of the hypocrisy in Edwardian society, particularly around what women were and were not allowed to do. The pencil notes at the top of the following cartoon (‘What women mustn’t do – and why’) begin with ‘If a woman shouldn’t vote because she doesn’t fight…’, alluding to the argument that suffrage should not be granted to women because they could not join the British Army: 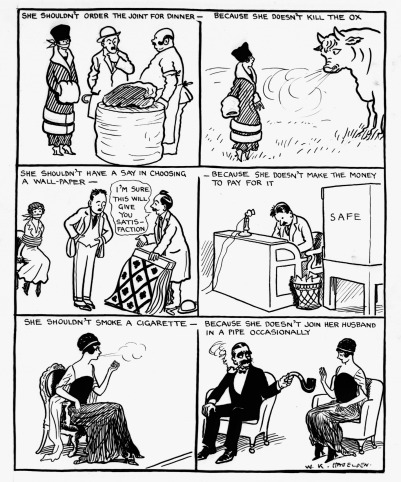 Interestingly, Haselden explores areas where men cannot match women’s skill in certain roles, particularly anything relating to domestic labour. During the First World War, women began working in roles which traditionally employed men, but were now empty as soldiers were needed on the Western Front. This led to discussions around men filling women’s roles in return (often with comical consequences): 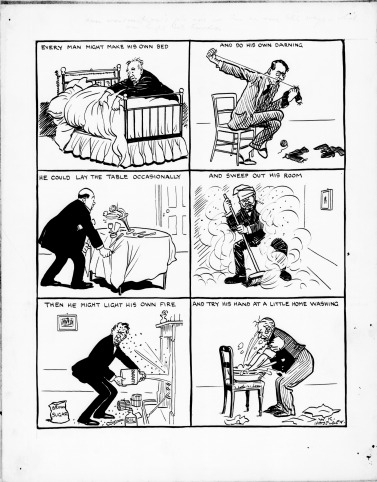 Haselden wasn’t entirely supportive of women’s involvement in politics, being particularly critical of the suffragette campaigns. His cartoons suggest that the suffragettes’ methods were silly and ineffective, and that getting involved with politics was a look most women would wish to avoid: 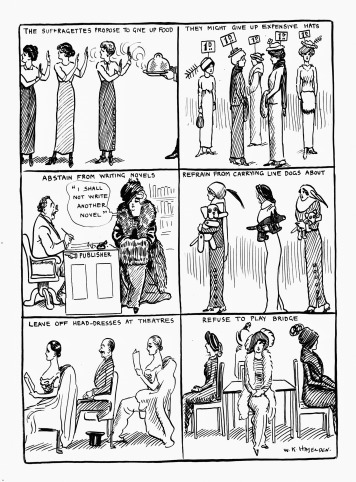 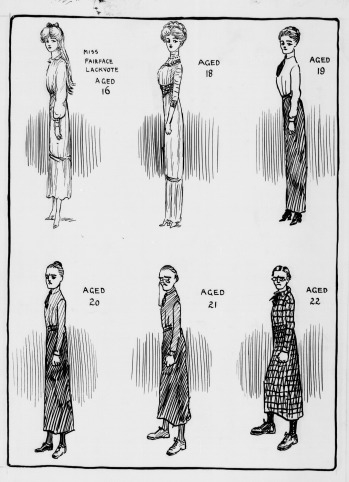 Men were not exempted from criticism of the suffragettes’ cause. In 1912, Haselden jokingly suggested that male responsiveness to women getting the vote depended primarily on the attractiveness of the campaigner in question: 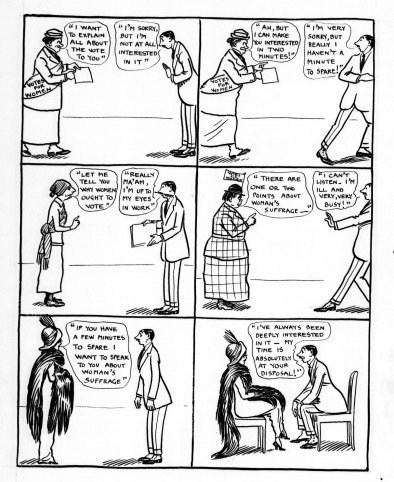 Haselden’s commentary is one of the joys of exploring the British Cartoon Archive; it’s nuanced but surprisingly light-hearted. Haselden highlights the frivolities of both men and women during the early 20th century, but also points out that a more equal society might not be a bad thing for anyone. And, of course, who can disagree with his point that women’s dresses should have more pockets?! A thoroughly modern man, indeed. 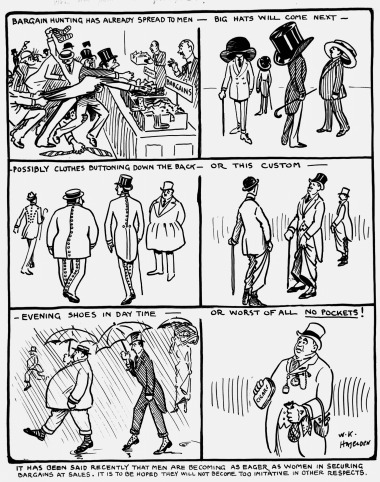