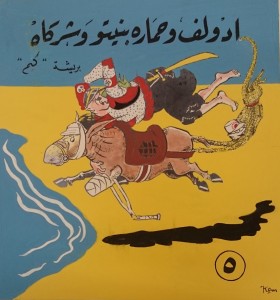 The British Cartoon Archive holds many unique collections from celebrated cartoonists, and one fascinating example is the KEM archive. Many of you will be familiar with the image of Adolf and his Donkey Benito, but just who was KEM?

KEM was born Kimon Evan Marengo in Egypt, the son of a Greek merchant, and grew up in the Greek community of Alexandria, coming to England to pursue studies at Oxford. His studies were interrupted in 1939 by the onset of the Second World War. By this point he had already been published in many international newspapers, including the New York Times and the Daily Telegraph, and he joined the Ministry of Defence where he worked on propaganda for the Middle East. He also spent sometime working as a war correspondent. 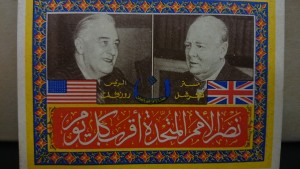 As a product of a Middle Eastern community, his work is often quite different to that of other cartoonists of the time. He did plenty of traditional war propaganda, cartoons involving Hitler, Mussolini and Churchill, but some of the treasures in the KEM collection come in the form of his Middle Eastern propaganda. These brightly coloured pamphlets are a unique look at propaganda during the Second World War. 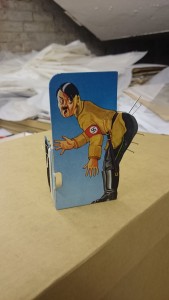 …and Hitler in some discomfort 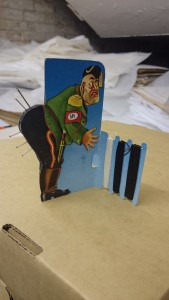 One of my earliest discoveries working with the KEM archive was that of a double sided pin cushion, complete with needles and pins still inserted, of Mussolini and Hitler. Such a small item says a huge amount about attitudes towards the enemy, and whilst it certainly has a comical element, the purpose is a serious one: keeping up morale by making two dangerous men into figures of comedy and ridicule. 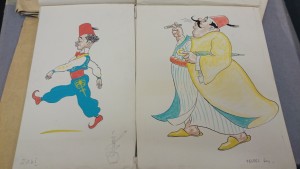 Also contained in the archive is a near complete collection of all of KEM’s Christmas cards, and many of the printers blocks used to create them. These Christmas cards would hardly be considered to display traditional seasonal imagery as they are heavily politicised, and those that date from the Second World War also work as propaganda, ridiculing the enemy. 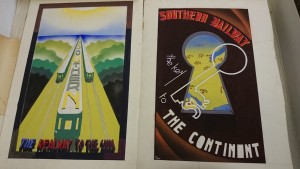 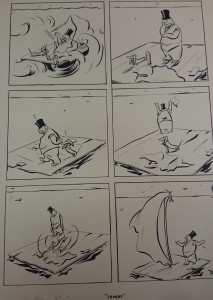 Snobby the Dachshund’s Adventure at Sea

A large section of the collection is taken up by original artworks, for his Christmas cards, his political cartoons, and even for a couple of posters advertising the Southern Railway. All the cartoon artwork was given an accession number by KEM and carefully recorded in the ‘Rochester Books’ – giving exact dates for when he produced the artwork, rather than the dates that they first appeared in print.

One of my favourite selections of KEM’s work however is his cartoon strips of Snobby the dachshund, who can be seen here rescuing his owner at sea by turning himself into a mast for their raft.

Explore the KEM archive, and many more, on the British Cartoon Archive website.