Food science: then and now

Dinosaurs in the Garden of England

We Have Never Been Silent

In my research on the history of the Airy Transit Circle, I am attempting to introduce the concept of assemblage to illuminate both the internal and external multiplicity of singularity objects in their material and non-material contexts (not to be confused with interpretive flexibility which highlights the multiplicity of the interpretations of a single object). (Law, 2002, pp.1-11) To put it differently, I am interested in how things (e.g. screws, bolts, wires etc.) and non-material entities (e.g. organisational structures, practices of the users of the instruments etc.) come together to form a coherent (but not stable) whole. Through this theoretical adventure, I am attempting not only to continue with the now signature research direction in history of science that aims at uncovering the hidden actors of events, but also to demonstrate what insights can a historical visualisation of actants as multiples as opposed to isolated “ones” can offer us. (Shapin, 1989; Latour, 2005, pp. 4-5) As it was highlighted above, the multiplicity of an actant refers to both its material multiplicity (i.e. being made up of various other material bits and pieces) and to its contextual multiplicity (i.e. being part of a social-cultural network(s) that is made up by other actants). This piece was also inspired by Gaston Bachelard’s poetical vision on open and closed chests, and how both the inside and outside of a chest can be considered to be infinite. (Bachelard, 1994, pp. 85-86)

What follows is a brief elucidation of my thoughts with the help of two artworks. Damien Ortega’s Cosmic Thing has already caught and imprisoned the attention of two major scholars in the field of History of Science, John Tresch and Bruno Latour, and I would like to expand upon their dialogue of the exhibit. Cosmic Thing is a Volkswagen Beetle (or ‘vocho’ as it is called in Mexico) disassembled by the artist (following the manuals of the car) and then suspended with nylon strings from the top of the exhibition gallery room in an exploded view, thus making the various different components which make up the car visible. It is worth quoting the close description of some of the parts offered by Tresch: “[o]n the well-worn seats we see coffee spilled in the dilated present of weekday traffic. Dents on the hanging bumpers inscribe the mass somnambulism of a crowded city. The tread of the tires bears the mark of pavement and dirt road, sudden stops and anxious errands, the grip of open possibility in outward flights. Through the glass we see landscapes approached and left behind, ocean and mountain, skyscraper and brick house; on the faded grey pain are traced the relentless action of sum, dust, rain, and air, alongside residue of bird shit and crushed mosquitoes.” (Tresch, 2007, p.90) The second piece of art is a is a musical composition titled 4’33’’ by John Cage (first premiered in 1952) which still tends to startle people’s imagination as the composition consists of 4 minutes and 33 seconds of “silence”. As it was mentioned above, scholars in history and sociology of science have already provided their interpretations of Ortega’s artwork. John Tresch used it as an example to illustrate his concept of cosmogram. According to Tresch, the Beetle stands suspended just like an atom or a solar system where each components are being held together through their dynamic (or in the case of the artwork, their frozen) relations to each other. These relations transcend their material boundaries in order to encompass the historical, cultural, economic, social and political entanglements within which it participated. Thus, the object becomes an “external depiction of the elements of the cosmos and the connections among them” (ibid, p.92). Damián Ortega – Domestic Cosmogon, 2013
Another piece by Damián Ortega exploring the idea of cosmos, and the relations between domestic object.

As a response to the interpretation of the artwork offered by Tresch, Bruno Latour characterises Ortega’s work with as a “thin” or idealist description of the Volkswagen Beetle as a thing. Latour criticises extensively Ortega’s view for not offering a thicker representation of the thing due to not exhibiting the actants that were involved in the assembly and production of the different parts of the car. However, this is not the final conclusion that Latour draws from the example. Instead, the French scholar highlights what remains left out in both thick and thin descriptions of things: the process of assembling. (Latour, 2007, p. 140) Similarly to Tresch, Latour evokes the right direction set out by Heidegger in focusing on the assembling, gathering or “thinging” of the elements. By describing the “assembling” process, we are able to demonstrate how things work not when they are suspended in an exploded view or “drawn in the res extensa mode”, but when the parts hide one another. Furthermore, it relocates power to the very process of assembling that becomes completed/finished (and thus hidden) once the object is assembled. (Ibid, p. 141) 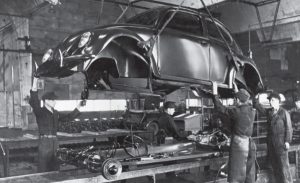 Photos from Volkswagen factories showing the assembling process and a few of the “assemblers”. Note the striking difference between the impression of representing only one car or multiple cars as mass produced. 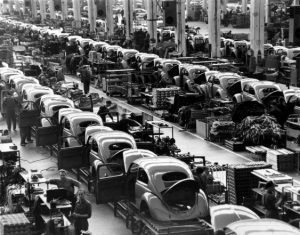 Many of the ideas put forward by both Latour and Tresch seem to resonate with Roland Barthes’ meditation on the Citroen DS. For Barthes, the car was a superlative object that “fell from heaven”. According to Barthes, it is this fall that highlights the absence of its origin, transforms the passionate conceiver of the object into an unknown artist, and brings about “a silence which belongs to the order of the marvellous.” (Barthes, 2013, p.169) In the light of Barthes’ mythology, Ortega’s cosmic thing seems to overcome the otherworldliness of the object. As Tresch writes, the exhibited VW Beetle is far from showing its imperfections. Coffee is spilled on the seats, dents are visible on the body of the car, and the even the birds have laid their judgements on the vehicle. Latour, however, still imagines the object as a perfect object presenting itself in the way in which Barthes describes the divine object. Tresch’s attention to detail shows that the object is in fact a worldly object, and its history is manifested through the imperfections of the exhibited model. In consequence, while Latour rightly calls attention to the lack of “social assemblers”, Ortega’s work illuminates history itself as one of the assemblers of the Vocho. 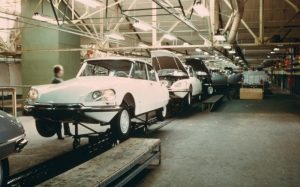 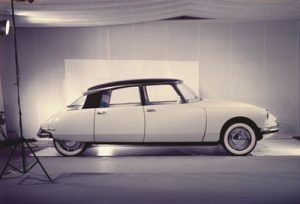 Returning to Latour’s point about shifting the focus of our analysis to the process of “gathering”, perhaps we should look not towards artworks that are “static”, but rather at works that are “dynamic”. One of the most dynamic of arts is music itself. When music is performed, we experience the Heideggerian process of gathering and libation at the same time. (Heidegger, 2012, pp. 10-15) A musical instrument not only “gathers” the sounds (similarly to the same way as a jug holds its content), but also allows for their making through a sonic libation of sound production. In comparison to static contemporary art pieces, like Ortega’s Cosmic Things, the outpouring of the music is not created by the viewer’s or the consumer’s interpretation (i.e. through what Tresch labelled as the interpretive flexibility of the VW Beetle), but through the object’s (or the musical instrument’s) inherent “thinging”. (Ibid.)

If anything, the fields of STS and History of Science like to focus on cases when conventionality breaks down. In the world of music, one of the musical pieces that engages in an in-depth manner with the conventions of the art is 4’33’’ by John Cage. The piece itself is always a performance for any type and number of instruments, but the musicians are instructed not to play their instruments. The composition is divided into three movements. If performed on the piano, the beginning and the end of the music is signalled by the materiality of music and the performance, i.e. with the opening and the closing of the keyboard cover at the beginning and end of each one of the movements. Through these actions and with the presence of the instruments, the work of art engages with the basic conventions of music by calling attention to its most elementary components that gather and hold the sounds and music together. However, by not allowing the musicians to play their instruments, the work denies the outpouring of the “jug of music”, thus restricting the musical instruments from the sonic libation. Yet, through this restriction, other participants who take part in the musical performance are revealed: the audience and the space (or the environment) of the performance. In fact, as it is usually agreed between interpreters of this piece, music (or sound) is always created during the performance, but the sources of the sounds are not the musical instruments themselves. Rather sounds and music are created by the environment (the quiet hum of the ventilation systems, the squeaking of the chairs, the creaking of the floor, a distant sounds of ambulance sirens breaking into the concert hall etc.) and by the people themselves (people murmuring to each other, scratching an itch, yawning at the dull performance of the musicians etc.). (Marter, 1999, p. 132)

So what if we attempt to interpret John Cage’s piece with the ears of Latour? It can be argued, that 4’33’’ achieves what Latour has identified as the shortcoming of the Ortega’s Cosmic Thing. First, it brings together the actants that are generally hidden in the assembling of a musical performance (the audience and the environment) Second, it goes one step further by not even challenging the sounds produced by the “context” with the sounds of the musical instruments. It is this radical liberation of the hidden assemblers of the sounds that staggers the attentive audience. And even within the audience’s and the environment’s attempted conformation to the most basic conventions of music, they cannot be silenced. In fact, we realise that it is impossible for us not to make a sound (whether we are part of the audience or part of the environment). As if, during this whole time, we have never been silent.