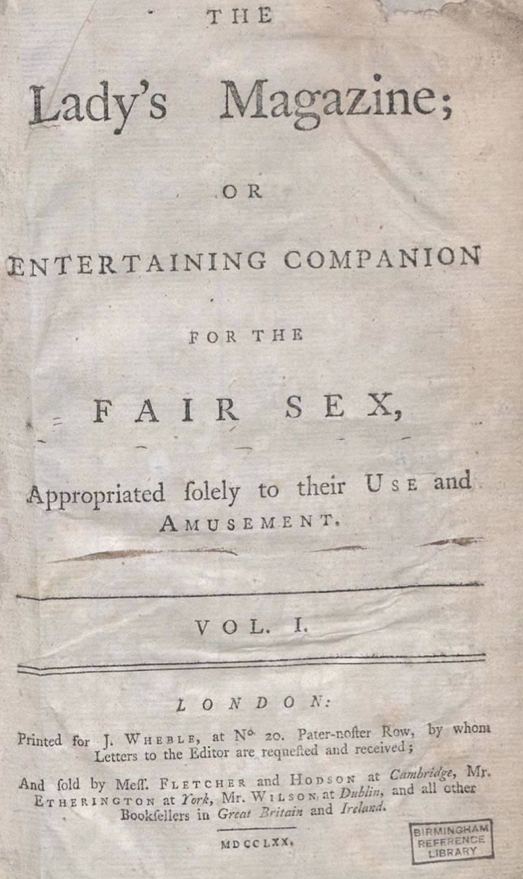 LM I (1770). Image © Adam Matthew Digital / Birmingham Central Library. Not to be reproduced without permission.

My research on the Lady’s Magazine began in the autumn of 2013 when I started to examine the fiction within eighteenth-century periodicals as part of my new book project. It was a completely digital effort: making use of the University of Kent’s subscription to the Portal to Newspapers and Periodicals c1685-1835 that has a mass of titles digitized by Adam Matthew – including the complete 62-year run of the Lady’s Magazine – provided me with more than enough material for the chapter at the click of a mouse. Downloading and reading the yearly volumes of the magazines felt very much like reading ‘the real thing’. The scanned pages retain any creases or stains or marks of age, and where the print is faded or blurred in the original, it is too in the digital copies.

I had seen and handled the magazine before I began my work on it, but only monthly issues rather than the bound, annual volume. After many months of reading the periodical in pdf format, I decided to purchase a volume of my very own.

Finding a year that was both particularly interesting in terms of content and in poor enough condition to be affordable took a bit of time, but I finally found a very readable (though almost disbound and missing the front board) volume of the Lady’s Magazine for 1775.

Reading the material artifact after having spent so much time with the digital editions was slightly disorienting. Used to the large screen of the computer and zooming in until the font size was comfortable, the material text seemed at once smaller (the font) and bigger (there’s no overlooking in the physical copy the weighty heft of each year). 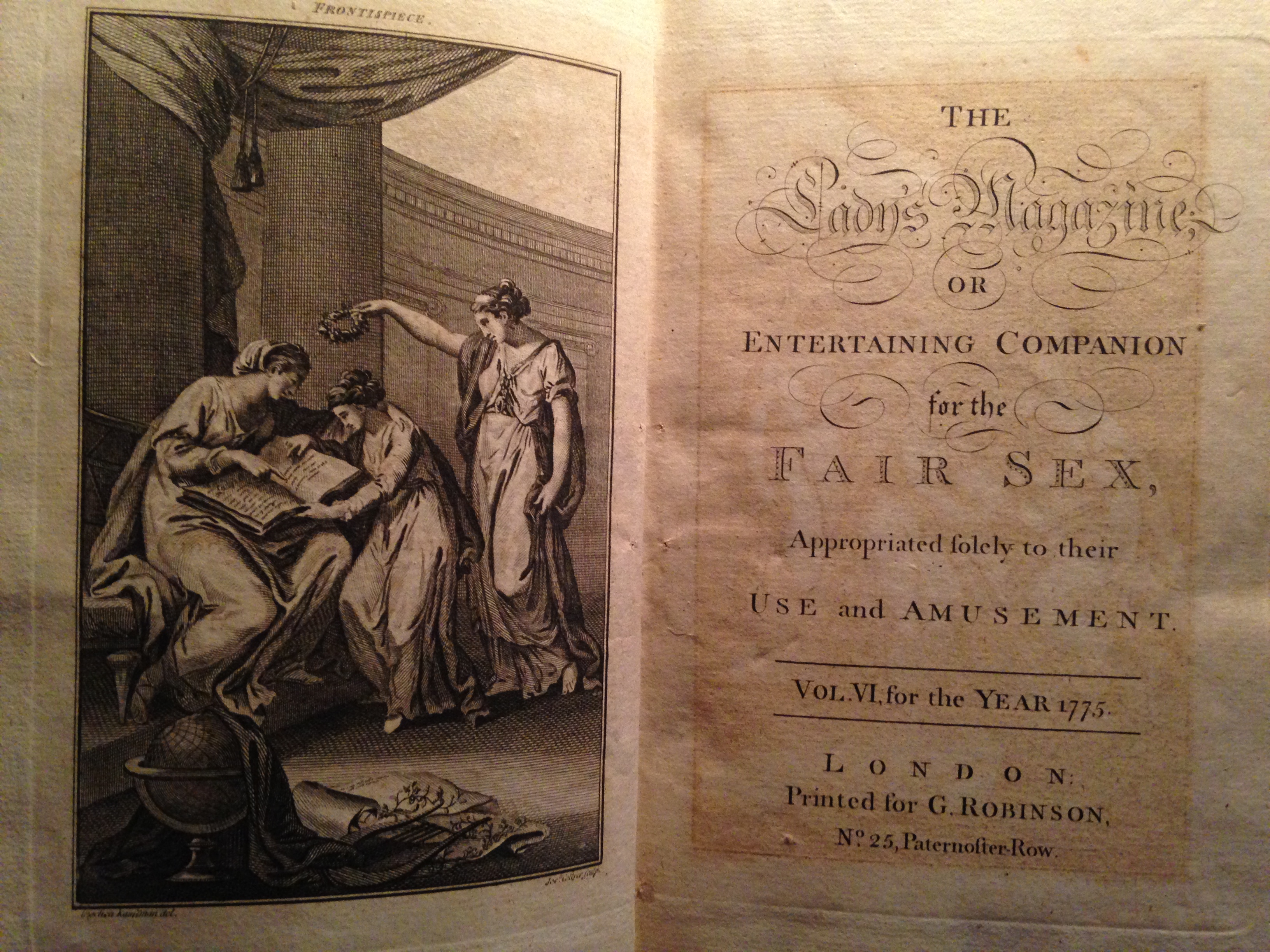 There is, of course, that connection to the past that seems so much stronger when handling the same worn and yellowed pages once thumbed through by the eighteenth-century reader.
And then there was the surprise of finding a page that was not present in the digital volume of 1775.

Taking out the book one night to show a friend what it is that I actually do (‘yes, I need to read 48 of these by next September’), she looked through the engravings and asked about the pattern.

Certain that there was no pattern in the digital copy, the pdf was immediately consulted and it confirmed that the pattern in that edition of September 1775, according to the directions to the binder, been removed. As Jennie Batchelor pointed out in her blog last week, binders at times ignored or overlooked these directions, and by luck, the ‘three new patterns for watch cases’ had ben retained in my edition.

That the pattern was set opposite a serial feature on Cleopatra seemed jarring, but it brought to mind a letter that had been written to one of the magazine’s regular columnists, Bob Short Jr., by a man who signed himself G. Rffy. 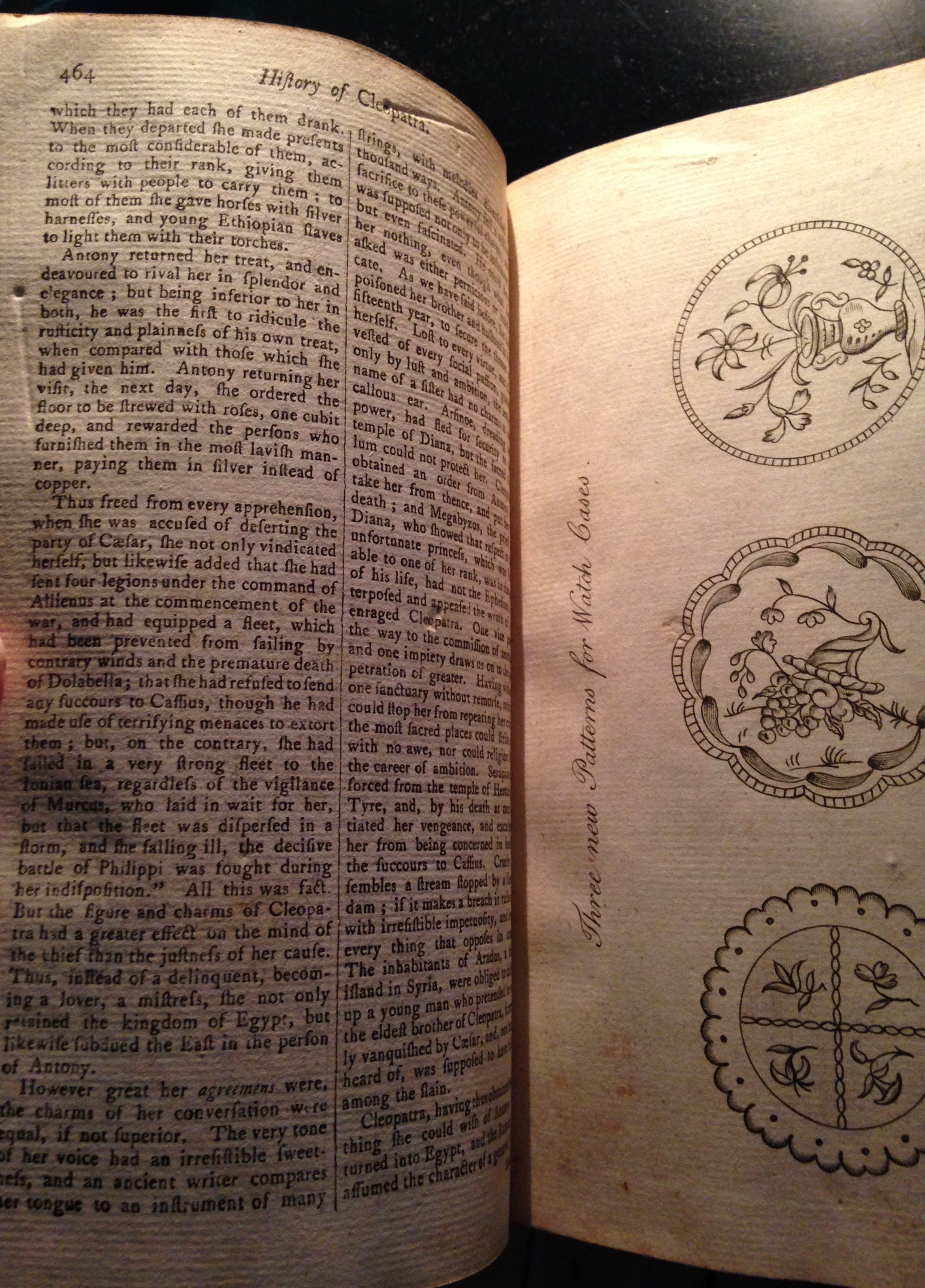 In January 1779, G. Rffy’s writes that Bob Short’s column was printed opposite the sewing pattern which ‘rendered it rather more conspicuous than otherwise’ (LM X [Jan 1779]: 93). This is just as true today; periodicalists handling the material artifact now experience the same sense of surprise when turning the page in the middle of a discourse on religion to find a pattern for ruffles. Readers’ experiences of and engagement with the magazine’s various items could be altered by the location of text opposite an engraving or pattern. While the pattern for watch cases may seem relatively unimportant in the grand scheme of the Lady’s Magazine, it highlights the differences between working with digitized and material magazines, and also raises questions about the editorial practices regarding the positioning of text and engravings to, perhaps, render certain items ‘rather more conspicuous’.