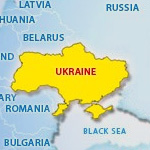 I have been following the crisis in Ukraine unfold with a very keen interest, for several reasons:

Firstly, as an Eastern European citizen that has witnessed the Romanian revolution 25 years ago live on TV, it seems to me as if the history is repeating itself: the street protests, the injured and the dead, the fleeing president, people ‘visiting’ the opulent presidential palace left deserted, the ecstatic feeling in the streets of having toppled an authoritarian regime and having had once’s voice finally heard and the emergence of a new, revolutionary government – sound all too familiar to me. One notable difference strikes me though: during the Romanian revolution, the military intervention from what was then still the Soviet Union was offered to the new leadership – but it was not accepted. This time around, Russian military intervention was fast and under the (false) pretext of protecting Russian nationals in what was considered a potentially unstable and non-inclusive Ukraine.

Secondly, as a scholar of European integration, it seems to me painfully ironic that Ukraine has moved in such a short period of time from talks to sign an association agreement with the EU to being on the brink of war with Russia. The very European integration project that has been hailed as a securitisation mechanism in Europe, including in former communist economies, had the disastrous consequence of exacerbating Russia’s strong political and economic claim over one of its former Soviet Union member countries, leading to what could be seen as inconceivable in 21st century, military invasion and potentially war in Europe.

However, as a scholar of Post-communist societies, I believe that this situation is not entirely a surprise. The communist legacy has continued to affect politics, economics and business in the former Communist block and Russia has consistently tried to recapture its grip on its past satellites or former Soviet countries through economic, political and military means. In response to these actions and to make sure that the break with the past is clear, former Soviet Union’s satellites have sought actively to integrate with NATO, the EU, and the euro. Such was the drive for European integration for some former Soviet Union countries, that Estonia and Latvia have already adopted the euro, regardless of the more recent crises that the European currency has faced. However, due to its geopolitical location and its mixed cultural heritage and history, Ukraine’s allegiances have been divided and this has been exploited by the Russian Federation, in search of a stronger economic integration agreement on the ashes of what used to be the Soviet Union. Russia’s customs union with Belarus and Kazakhstan brings together economies that are already strongly integrated economically and Russia’s desire and push for Ukraine to join this customs union is another example of how the communist legacy continues to influence business in this area.

So what now? Regardless of the desirability of closer links between Ukraine and the EU, Russia remains Ukraine’s and EU’s next door neighbour and one of their main trading partners. It is in Ukraine’s and the EU’s interest alike that Russia continues to be a trusted member of the international community rather than being antagonised, in an unwanted ‘sequel’ to the Cold War. However, Russia has violated several international laws and although some of its concerns over the future of the Russian speaking citizens in Ukraine may be genuine should the new Ukrainian government give a voice to the more extremist groups of Maidan protesters, dialogue should be open and the Russian government should be persuaded to withdraw its troops from Crimea, whilst allowing them to save face. The diplomatic talks launched in Paris between the new Ukrainian government and the Russian authorities are a good step forward in defusing the crisis and allowing the Ukrainian people to celebrate their revolution without the fear of foreign invasion. Then the arduous task of building a new democratic, inclusive, united and prosperous Ukraine can begin in earnest, with a little help from their Western ‘friends’.

Dr. Stoian is a Lecturer in International Business at Kent Business School and holds a Ph.D. in European Studies from the University of Kent. Her expertise is in Post-Communist Economies and she has written a paper on ‘The Benefits and Limitations of European Union Membership as a Security Mechanism’ published in the Journal of the European Integration, as well as a paper entitled ‘The Interplay between Security Factors, European Integration and Security in Central and Eastern Europe’, published in the Journal of International Business and Economics.