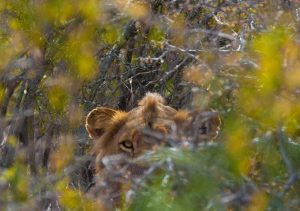 Currently the West African populations of lions are Critically Endangered (Henschel et al., 2014) and currently occupy only 1% of their historical range. The presence of lion in Ghana is therefore very important, although it is known that many west african sub-populations cling on in single figure numbers.

A recent paper (Angelici and Rissi, 2017) suggests a recent sighting 11 years since the last confirmed lion presence in Mole National Park. If present the small number of individuals (perhaps as few as two or three) suggested by the sightings reported in the paper, might appear insignificant. Neverthless many populations in West africa are of this size, totalling perhaps less than 200 across the entire region – the ast wild representatives of the IUCN’s newly designated northern subspecies of lion Panthera leo leo (the rest are in India).

Although we rarely consider individual animals in conservation, with lions it has reached that stage. If a few individuals can be conserved in Ghana, they might provide hope for continuation across the region and for the northern sub-species Panthera leo leo as a whole.