CHOTS Away Day: The Historic Dockyard, Chatham, 9 May 2014 Members of the University of Kent’s Centre for the History of the Sciences (CHOTS) meet outside The Royal Historic Dockyard, Chatham, Kent.

It was in the mid-sixteenth century when the Royal Navy first used the riparian areas surrounding the River Medway for the construction, repair and storage of its ships, with the first warship, the Sunne, launched in 1586. From that time until now the dockyard on the Chatham shore has been in near-constant use building ships (and later submarines), with the impressive dry docks housed in large timber structures at the centre of activity. Today, just over 20 years after the Naval Dockyard was closed by Margaret Thatcher’s Conservative government, the site is a museum run by the Chatham Historic Dockyard Trust, who preserve and use the Dockyard for displaying objects and materials connected with the history of Naval shipbuilding and its associated industries.

Our day started with lunch at the on-site restaurant before we met Alex Patterson, the head of collections, for our personal guided tour around as much of the 80 acre site (with its over 100 buildings) as we could fit in. After a short explanation on some future plans of the Dockyard, where we learned that most of the timber buildings were constructed using de-commissioned warships after they were taken out of service, Alex led us into No.1 Smithery, where the forging, pipe-bending and general metalworking took place. This was the latest building to have been restored and used for displaying the shipbuilding practices that took place there, along with exhibiting maritime treasures such as a large collection of ship models, an art gallery and other unrelated objects (like the Gruffalo exhibition!).

Next up was one of the highlights of the day – 3 Slip. Built in 1838 by the Royal Engineers, it was Europe’s largest wide span timber structure and is still a remarkable edifice. Based on the upturned hull of a ship, 3 Slip was one of seven such buildings where ships and submarines were built, repaired and maintained throughout the centuries. It is now used to store really big things from the collections of the Historic Dockyard and the Royal Engineers Museum, and as such contains a wide variety and mix of different objects. From a midget submarine, railway carriages, military vehicles, steam-powered presses and rolling machines for use in the construction of ships and other metal working tools, the Slip contains everything you might want or need to start building a submarine or supply a small army!

A quick dash across the deck of HMS Gannet (1878), past a Royal Navy helicopter and around HM Submarine Ocelot (1962) led us to the bow of HMS Cavalier (1944), a Second World War naval destroyer. Cavalier is moored in the Victory Dock, where arguably the most famous naval warship of all time, HMS Victory, was built between 1759 and 1865. Opposite Victory Dock is the building once used for steam-heating and bending the large oak beams used to build wooden ships like the Victory. Our guide told us that each beam had to be heated for one hour for every inch it was thick, and with lengths of oak up to 8 inches used in the construction of these ships, this process could be very long indeed!

We were then shown around the ‘Steam, Steel & Submarines: The Royal Dockyard Story, 1832-1984’ exhibition, which contained the last figurehead to be used on the prow of a naval ship (the Admiral Rodney), a number of fine maps and models of the Dockyard site, and a customised Jolly Roger flag used by a Second World War British submarine crew. A brief tour of the archive and library followed, before we headed down into the stores where collections are kept, catalogued and where items are still being discovered.

The tour ended in the Victorian Ropery (dating back, somewhat confusingly, to Georgian times). This quarter-mile long building was, and still is, used to make rope on a commercial basis for ships, businesses and for any other reason one could need rope. A truly impressive space, being in the Ropery makes you realise just how important Britain and British industry was on a global scale over the last 500 years – A fitting end to a revealing and fascinating day… when can I go back? 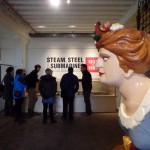 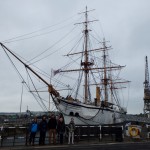 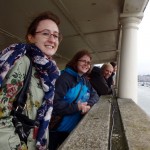 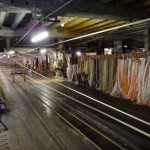 The Victorian Ropery at The Historic Dockyard, Chatham. 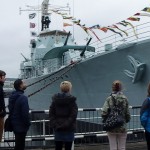