All are very welcome to join us as we return to screening melodramas starring Dirk Bogarde. We will be showing Libel (1959, Anthony Asquith, 100 mins) on Monday the 12th of November, 5-7pm, in Jarman 6. 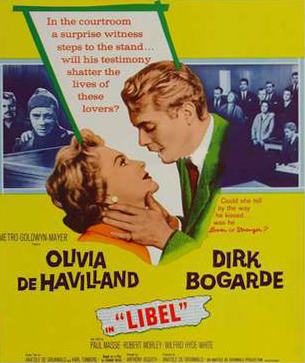 The screenplay was adapted by Anatole de Grunwald and Karl Tunberg from the 1935 play of the same name by Edward Wooll. It stars Bogarde as Baronet Sir Mark Sebastien Loddon, a man who launches a libel action after he is accused of being an imposter. It was described as a ‘courtroom melodrama’  on its release in the United States by the trade journals Harrison’s Reports (24th October 1959, p. 170) and the Independent Exhibitors Film Bulletin (26th of October 1959, p. 21).

Do join us, if you can, for a film which also stars Olivia de Havilland (as Loddon’s wife), Paul Massie (as Loddon’s accuser), Robert Morley (acting for the prosecution) and Wilfrid Hyde-White (as the defence counsel).