Ann-Marie has very kindly provided the following great round-up of our thoughts on The Muppet Christmas Carol: 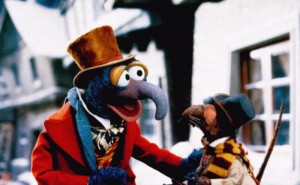 (Brian Henson, 1992) was a festive frolic that encouraged a few interesting discussions. Firstly, we noted Gonzo’s role was incredibly important to the structure of the movie. It was his role as Charles Dickens as Greek chorus that gave the tale a comic aspect. He would pre-warn the audience of things to come, whisper for dramatic effect (with self-reflective humour) and use direct quotes from the novella. In this way he and Rizzo the rat had a complex relationship with the audience. Often films do not have a narrator, and rarer still is one that addresses the audience. Due to this narrative choice the film attempts to replicate the method not only of a book, but an author.  Gonzo’s omniscient narration and self-reflective humour became a form of punctuation and altered the rhythm of the story, showing that melodramatic tropes were present in the narrative construction, even if not traditionally.  Emotive response, then, is filtered and adapted through the narrator rather than the original story. 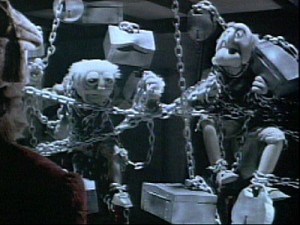 The Victorian setting lent itself to Gothic tropes that have been discussed throughout this term. London is a poor and dirty city, filled with smog and shady characters. Two scenes exemplify the Gothic the most: The first is during the Marley sequence where the candlelight is removed, chains rattle and ghosts howl. Although it is still humorous due to the presence of the Muppets, the style relies on tropes for understanding. In many melodramas there is often a sequence that relies on the use of a staircase to convey a change in situation or meaning. The Marley brothers change their position as they move from the private safety of Scrooge’s room, to the staircase where they are dragged down to a more sinister and public space where they shall pay for their crimes to man.

Secondly, the ghost of things yet to come is so chilling that Gonzo and Rizzo abandon 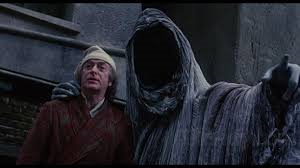 the audience. Here the film uses fog and a deserted graveyard to convey horror.  The ghost is dressed in a long grey robe and we never see its face. Scrooge stares into the face of emptiness, a blank space yet to be written. Yet the ghost’s hidden form is melodramatic because of the ensuing silence, showing that a heightened performance can be unsettling through both manic exaggeration (see Bette Davis in Of Human Bondage) and slow meaningful gestures. The performance of the ghost is played in opposition to Caine’s exaggerated movements and this difference in performance style further exaggerates the other. Therefore, melodramatic performances are achieved through this Gothic setting and the play between different forms of performance style and/or puppetry in the film.

Lastly, music summarises emotion and moves the plot within the film, however it is also present in the Muppets’ comedies and TV series. Thus, it could be suggested that it is a Muppet trope rather than melodramatic.
Have a great Christmas and we look forward to discussing more Gothic films with you next year!
I second that, Ann- Marie! Merry Christmas and a Happy New Year to all.
As ever, do log in to comment, or email me on sp458@kent.ac.uk, to add your thoughts to the summary.