All are very welcome to join us for the last of this term’s Screening and Discussion sessions, which will take place on Monday the 14th of December, 4.30-7pm, in Jarman 7. 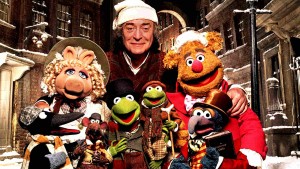 The Muppet Christmas Carol (Brian Henson, 1992) retells Charles Dickens’ famous festive novella, A Christmas Carol. The original story was first published in 1843 and received critical acclaim for its story of a bitter, ageing man that comes to realise the error of his ways. Since its publication it has been re-told in a variety of mediums, each attempting to add their own creative individuality onto the timeless story.

The Muppets, with their usual self-reflective humour, seem to be an odd choice for this week’s film.  However, despite Gonzo’s amusing depiction as an omniscient narrator, the film does have some classic tropes. Some examples of the tropes that appear include: performance style, disguise and music. In the next session it may be useful to debate how Charles Dickens’ work is adapted from screen, and if his sensationalist writing has impacted the depiction of his work in cinema.

Do join us if you can, for this Christmas classic – festive eatables will be provided!