All are very welcome to join us for the last screening and discussion session of this term, which will take place on the 30th of March, 5-7pm, in Jarman 7.

We will be showing Frances’ suggestion: The Student of Prague (1913, Stellan Rye, 85mins). 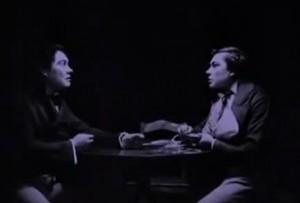 The Student of Prague (1913) tells the story of Balduin – the student in question – who is a popular and skilled fencer but feels unhappy and unfulfilled in life. He becomes interested in a countess after rescuing her from a fall in a lake, although she is already betrothed to be married to her cousin. Balduin hopes he can change this, and better his life, by making a deal with a strange man named Scapinelli. Scapinelli promises Balduin great riches and, in exchange, Scapinelli can take whatever he wishes from the student’s apartment. Balduin signs a contract agreeing to these terms and Scapinelli then makes his choice: he touches the full-length mirror in the room and Balduin’s reflection suddenly emerges. This double – now a distinct figure, unattached to its original form and freed from the constraints of the mirror – walks out of the room. Balduin attempts to suppress his amazement and worry over this incident as he soon concentrates on wooing the countess. However Balduin’s doppelganger re-emerges and begins to haunt his former owner…

The Student of Prague is a silent, German film starring Paul Wegener as the titular character. The film has had a few remakes (and re-cuts), including ones in 1926 and 1935, and different versions of the original have subsequently been released. One 2004 DVD release, for example, has a running time of approximately 50 minutes. As will be explained by the opening of the version screened today, details gathered from press releases and exhibitions notes reveal that the film should be over 80 minutes long. Today’s film has been restored by Filmmuseum München and is a more complete version of the film. This cut of the film thus contains expanded scenes which allow for the development of some of the supporting characters, and in particular that of the ‘wandering girl’.

Like many of the other films screened in the season, the double figure in The Student of Prague is an evil, trouble-making doppelganger. Balduin’s reflection stalks his original owner and sabotages his efforts to seduce the countess. As we have discussed previously in relation to this theme, it seems impossible for the double and the original figure to co-exist in these stories. The narrative of The Student of Prague explores the intolerability of this situation but with an additional twist: by removing Balduin’s reflection, Scapinelli effectively removes an aspect of Balduin directly – his soul. This aspect is confirmed by the film’s melodramatic ending which is reminiscent of Simon’s efforts to deal with an unwanted doppelganger in The Double (2013) screened a few weeks ago.

The link between the double and the soul is one of the avenues explored by Otto Rank in his investigation into this uncanny phenomenon in his work The Double, written in 1914. In this work Rank is interested in psychoanalytical investigations and, like his contemporary Freud, is inspired by the recurring themes present in German literature, one of which is the double. Rank, like Freud, calls the double uncanny: for the protagonists in the stories analysed by Rank, the experience of viewing one’s own doppelganger is an unnerving and eerie experience, which usually results in injury or death. Rank wants to understand the attraction of including a doppelganger character in a story and so he adopts an anthropological approach – albeit framed by psychoanalytical interpretations – and explores the history of the doppelganger in various cultures. One aspect he discovers is how traditionally one’s own reflection or shadow was thought of as a double. In this respect, the doppelganger is intimately related to the original figure and completely inseparable. It is for these reasons that the double, he argues, is closely related to death and the soul. Ranks writes: “Folklorists are in agreement in emphasizing that the shadow is coequivalent with the human soul.” (Rank, 1914, 75)

The Student of Prague appears to engage with this type of doppelganger, as Balduin’s double is not a sibling or coincidental lookalike but a ‘part’ of him; his reflection. The link between The Student of Prague and Rank’s research also runs deeper as the film was a big inspiration for the writer. Indeed, Rank begins his book with a detailed summary and analysis of the film as the plot and imagery of The Student of Prague provides several avenues for Rank to explore the figure of the doppelganger. Rank describes the experience of watching the film and its subject matter as uncanny, as he writes: “An obscure but unavoidable feeling takes hold of the spectator and seems to betray that deep human problems are being dealt with here [in The Student of Prague].  The uniqueness of cinematography in visibly portraying psychological events calls our attention, with exaggerated clarity, to the fact that the interesting and meaningful problems of man’s relation to himself – and the fateful disturbance of this relation – finds here an imaginative representation.” (Rank, 7)

What is significant is that Rank’s musings on The Student of Prague extend to think about the medium of cinema itself. Cinema, itself a form of doubling, is compared by Rank to “dream-work”. He is particularly fascinated by how this technology – which was still relatively in its infancy at the time of Rank’s writing – has the ability to both represent the physical presence of the doppelganger and evoke the larger themes of melodrama inherent in such stories. These themes include: a crisis of the individual; thwarted romance; love rivals; and the dissolution of family units. Rank observes:

It may perhaps turn out that cinematography, which in numerous ways reminds us of the dream-work, can also express certain psychological facts and relationships – which the writer often is unable to describe with verbal clarity – in such clear and conspicuous imagery that it facilitates our understanding of them. (Rank, 4)

The filmic representation of the double is a topic we can discuss after the screening. Do join us to watch an early example of the doppelganger theme on-screen, and see why The Student of Prague proved so influential for Rank’s work.

I hope to see you there!