All are very welcome to join us for our next screening and discussion session, which will take place on the 23rd of March, 5-7pm, in Jarman 7. 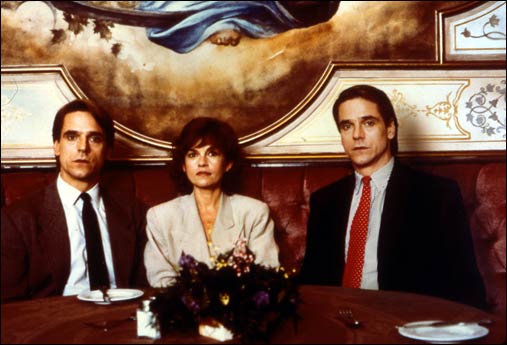 There comes the inevitable point in Dead Ringers (1988), where Claire meets both Beverly and Elliot together for the first time. Having her fears realised that while she thought she was involved in a sexual relationship with one, she had been unwittingly duped into sexual intimacy with both, she is horrified by their presence. This scene is pivotal as in Claire’s repulsion the audience realises fully the true horror of their behaviour. Despite the spectator being privileged with the knowledge that Elliot and Beverly are identical twins and have seen both together on screen previously, the meeting with Claire unveils the creeping extent of the uncanny nature of their existence. It’s as if we are meeting ‘the double’ for the first time.  But who here is the double, Beverly or Elliot, or both?

The film is a meditation on primal fears towards twins. Beverly and Elliot (known as Bev and Elli, very feminine names and both played by Jeremy Irons) Mantle are both celebrated gynaecologists who share everything; knowledge, reputation, work and women. When a famous actress, Claire Niveau (Genevieve Bujold) seeks treatment from them, Elli, the more outgoing of the twins, begins a relationship with her and subsequently encourages Bev to continue the liaison by pretending to be Elli. Claire’s presence in their lives is a catalyst for an excessive downward spiral for Bev and Elli as sexual depravity and drug use threaten not only their work but their existence.

The doubling in Dead Ringers is a variation on the concept of the double. The explicit difference with the film is that the two act as if one entity and wish to remain so. The horrifying nature of doubling is only disclosed through the character of Claire. It is this introduction of reality and “normality” of love and relationships that is the threat to their existence in endeavouring to separate them into single units.

It’s an uneasy watch as Cronenberg deftly crafts and builds on the creeping horror scene by scene. In an interview, Jeremy Irons explained in order to remember which twin he was playing, he played one by walking on the balls of his feet and the other by walking on his heels. Creeping indeed. Or just creepy?

Do join us, if you can, and please note that due to the film’s length we will be starting promptly.