All are welcome to attend the third of the Summer Term’s screening and discussion sessions which will take place on the 22nd of May in Jarman 7, from 4pm to 7pm.

“One might suggest that the overall development of the Hollywood cinema from the late 60s to the 80s is summed up in the movement from Romero’s use of the Star Spangled Banner (the flag) at the beginning of Night of the Living Dead to Spielberg’s use of it (the music) at the beginning of Poltergeist.” (Robin Wood, ‘Papering the Cracks: Fantasy and Ideology in the Reagan Era,’ Hollywood: From Vietnam to Reagan)

Poltergeist, directed by Tobe Hooper was released in 1982 and has been described by Robin Wood as “Tobe Hooper’s worst film”, precisely because it has the look of a Stephen Spielberg film (Spielberg co-wrote and was co-producer of the film). Made on an estimated budget of $10m, it grossed over 7 times that in the US market alone. Its success spurred the studios on to make a further two films and a TV series in the 1990s. As with Jaws and its sequels, however, Poltergeist’s sequels offered decreasing financial and artistic rewards.

There is no doubting that Poltergeist belongs to the horror genre, but it is worthwhile reflecting upon the more melodramatic aspects of the film which arguably underpin its structure and success. If we remove “horror” from our approach, the film could be easily described as a family melodrama or drama, as the narrative is purely based on a family searching for their missing daughter (albeit a daughter “lost” in the ether of the spirit world via the TV). Much of the film focuses on the emotive interchanges between the family and the outsiders that aid the return of the daughter to the family. The camera stays close to the characters to heighten the emotions felt by the characters and the necessary emotive response required from the audience. The film updates the Gothic house in line with the concerns of the 1980s and that decade’s ideologies (references to Reaganism run throughout the film). Familial and homely space are explored in the narrative and presented at odds with the attainment of the American dream.

Indeed, in his postscript on Poltergeist in Hollywood: From Vietnam to Reagan, Robin Wood touches on three important elements of the film; the representation of the all American family, the drive for the American dream and the influence of Spielberg.

The themes that could be focused on in the discussion are:

It may be worth reading, ‘Tales of sound and fury. Observations on the Family Melodrama’ by Thomas Elsaesser. 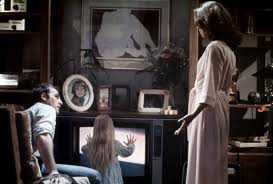 Do join us if you can. And please note we start at 4pm.