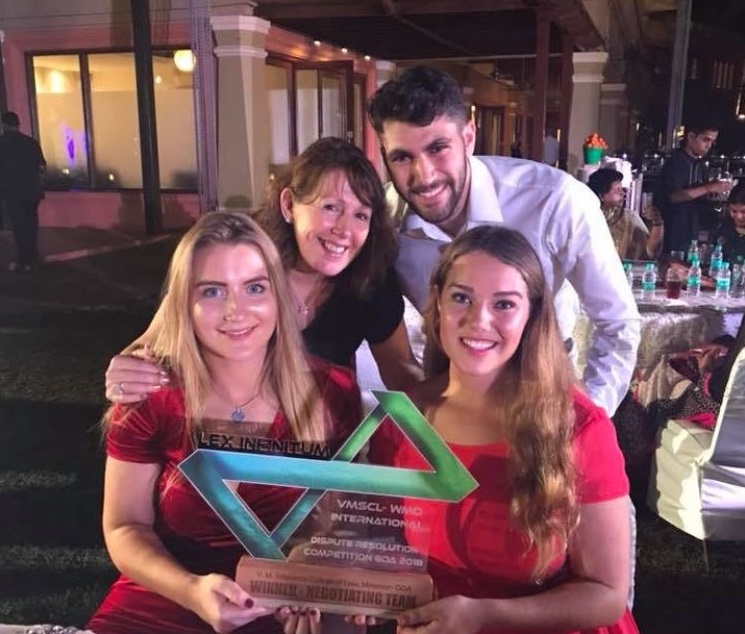 Jade and Summer were awarded ‘Best Negotiating Team’ in the final against Government Law College, Mumbai. Together with Andreas Malekos, the three final-year Law LLB students from Kent comprised the only team from the UK (out of a total of 24 teams) taking part.

On the first day of the four-day competition, all teams and their coaches were invited to attend a workshop conducted by expert ADR practitioners. Two days of competition followed before the final, held on Saturday 13 January.

The final was judged by a panel of five expert mediators and took place on a stage in front of all the other competitors and their coaches. The problem tackled by the finalists centred around a dispute between two recent graduates over a business venture to develop and market a new App. The whole negotiation was blogged live online at mediationmusings.com

At the closing ceremony held at Marriott, Miramar, Jade and Summer received their award from the Hon. Justice Kum Nutan D Sardessai, a Judge at the High Court of Bombay at Goa.

Lex Infinitum seeks to give law students from all over the world an opportunity to showcase their Mediation and Negotiation skills. It also aims to promote Alternative Dispute Resolution (ADR) in India and to provide law students and ADR experts with a platform to network, innovate and keep abreast of the latest happenings in the field of ADR.

Law students at Kent can choose to study extra-curricular ADR modules in Mediation and/or Negotiation, both of which offer the chance to compete at national and international level. The modules provide an introduction to the skills required to resolve legal disputes without recourse to litigation. Other options include client interviewing.

In April last year a team of six Kent Law School student mediators won two awards at the 16th International Law School Mediation Tournament held in Glasgow after reaching the final of the competition sponsored by the InterNational Academy of Dispute Resolution (INADR). The team won a Top Ten Mediator Team Award for finishing fourth out of 42 teams and were voted winners of the H Case Ellis Spirit of Mediation Award by competitors. It was the second consecutive year a team from Kent scooped the prestigious Spirit of Mediation award.

Law students at Kent can also develop their practical legal skills by getting involved with the work of Kent Law Clinic, recently relocated to the £5 million purpose-built Wigoder Law Building. The new building also includes a replica court room on the upper floor, home for Kent’s busy mooting programme.