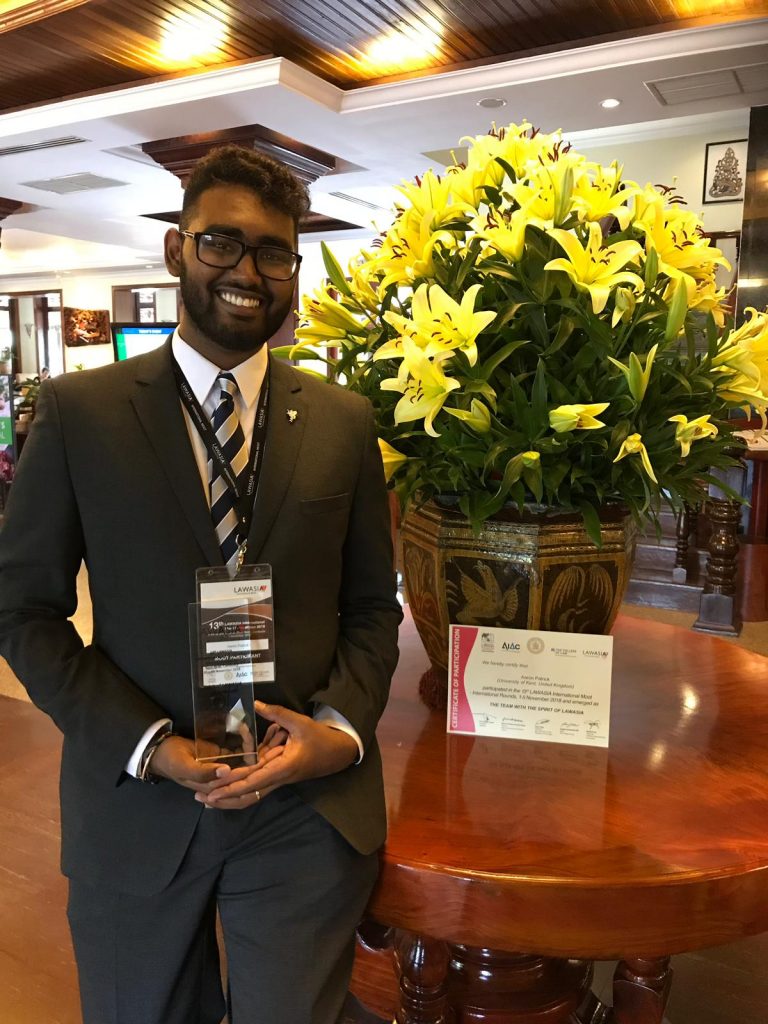 Recipients of this award are chosen each year by fellow competitors in recognition of being the team that best reflects the ideals, values, virtues of fair play, camaraderie, magnanimity and generosity in a competition environment. Aaron was selected for his advocacy skills and also for his tenacity in taking part in unusually challenging circumstances – he was the only team member from Kent able to travel to Siem Reap for the competition after another team member fell ill. Aaron was granted permission to participate as a ‘non-competitor’ and spoke for more than 40 minutes in each round covering all the designated issues for both the claimant and the respondent. A trophy was presented to Aaron (and his coach, Kent Law School Senior Lecturer Johanne Thompson, who accompanied him to Cambodia), at an award ceremony on Monday at the Sofitel Angkor Phokeethra Golf & Spa Resort.

Aaron, a final year Law LLB student at Kent Law School, said: ‘LAWASIA is truly a one of a kind experience. The kinds of people that you meet there and the feeling of going head to head with them is unlike any such accolade that you would ever receive. There is no trade for such an amazing opportunity.’

Aaron is also President of Kent Law Temple Society, a Law School student society that aims to enhance the prospects of those aspiring to a career at the Bar. The society organises talks, skills workshops and networking events to help inform members about what a career at the Bar entails. It also runs a year-round mooting programme. Aaron confesses to having a love-hate relationship with mooting: ‘Every single time I moot, I ask myself “Why do I put myself through this?!” That is straight up to the point of actually speaking. When you open your mouth and start saying everything that you’ve prepared before, it is the best feeling in the world! There is nothing like standing there, before a panel of three, and relaying all your hard work and being able to defend your client’s stance. It is exhilarating and addictive. As soon as I’m done, I just want to do it all over again!’

His coach Johanne said: ‘The LAWASIA competition offers an amazing opportunity for students to hone essential skills in problem-solving, legal analysis, drafting legal submissions and developing an advocacy style which presents succinct and persuasive arguments. What Aaron did was unique in that he had to compete single handedly against some tough opponents and held his own on each occasion. The reward was to know that the other competitors recognised this and voted for Aaron to receive the Spirit of LawAsia award. I was extremely proud of him! As a bonus, this competition enabled Aaron, and all the other students, to forge links and develop networking opportunities (essential for a legal career)all over the world.’ A total of 13 teams from China, India, Japan, Malaysia, Singapore, Sri Lanka, Thailand and Vietnam took part in the annual LAWASIA competition, tackling a complex arbitration moot problem concerning a dispute over a commercial contract. The teams all worked under the Kuala Lumpur Regional Centre for Arbitration Arbitration Rules. LAWASIA is an international organisation of lawyers’ associations, individual lawyers, judges and legal academics in the Asia Pacific region; the chair of its Moot Standing Committee is Kent alumnus Raphael Tay, a partner at Lee Hishammudin Allen & Gledhill in Kualar Lumpur. The competition is organised in conjunction with the LAWASIA International Conference and many of the conference delegates (who include legal advisers, attorneys and judges) act as moot judges.