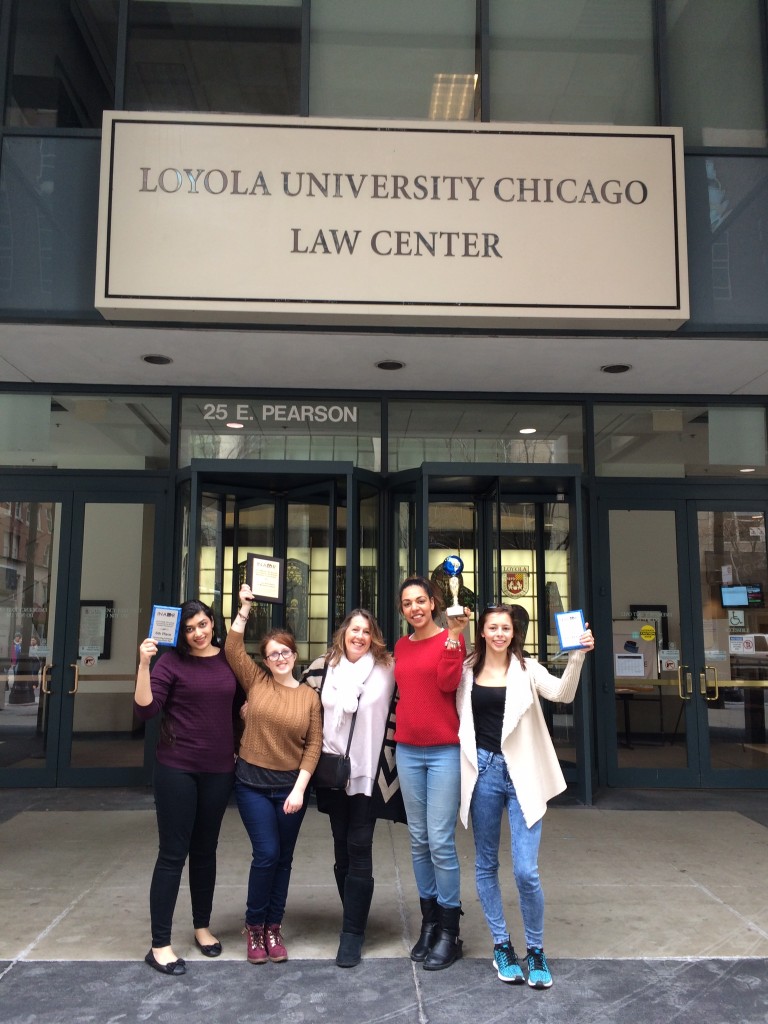 A team of student mediators from Kent Law School finished fourth and was voted the best international team at the 15th Annual International Law School Mediation Tournament held in Chicago.

Rachel Bale, Meshaal Choudhary, Rachel Easton, and Hannah Loosley were presented with the H Case Ellis Spirit of Mediation Award for the accolade of being voted the best international team by more than 400 fellow competitors. The trophy, one of four the team received at an awards dinner held on Friday evening, bears a quotation by Former US Chief Justice Warren E Burger that says the true peacemaker is a “problem solver, harmonise and peacemaker, the healer – not promoter – of conflict.”

The team secured fourth place in the Top Ten Advocate Client Team awards category after competing in five rounds involving more than 50 teams from countries across the world. Both Meshaal and Rachel Easton were also awarded trophies for coming 6th in the Outstanding Individual Advocate/Client Pair category.

Kent Law School Lecturer in Alternative Dispute Resolution Janie Clement-Walker, who accompanied the team to the US was thrilled with their success. She said: ‘These amazing girls rocked the competition in Chicago! I’m so proud of all them. The University of Kent is now firmly established in the international field of mediation. Outstanding performances by all four students contributed to their success and the four awards they received are testament to all the hard work they put into preparing for the tournament.’

Hannah enjoyed being able to showcase the team’s mediation skills and to learn more about different styles and approaches to mediation during the training sessions: ‘We have come to realise that the skills gained in these competitions will not only be invaluable if we chose to pursue careers in mediation or advocacy, but also in any professional field. These include: the ability to rephrase complex ideas in a digestable way; working together effectively with somebody you met five minutes ago; and putting your ideas forward in a way that will be listened to and agreed with. It was great to work with people from all over the world and, of course, to have a bit of time to explore Chicago!’

Fellow team member Rachel (Bale) also appreciated the opportunity the competition afforded to develop skills: ‘The competition feedback from the judges really helped to improve our performances, and the chance to swap partners so we all had a chance to work with each other really consolidated our teamwork and co-operation skills. The opportunity to meet so many intelligent students from all over the world was truly amazing and the fact that we made it to the finals was just the cherry on the cake. I know that the skills that each of us have taken away will enhance our future legal careers, whatever paths we choose.’

The four-day competition, hosted by Loyola University Chicago is sponsored annually by the International Academy of Dispute Resolution (INADR). Competitors are required to play the role of mediator, advocate and client in each round with respected mediators and lawyers who advocate at mediations serving as judges for the tournament. Teams from Kent have competed at an international level in Chicago in 2014 and in London in 2015.

Earlier this year, Rachel, Meshaal, Rachel and Hannah were the first team from Kent to compete against 66 university teams in the 11th ICC International Commercial Mediation Competition held in Paris.

The chance to compete at national and international level is open to all Kent students studying a module in Mediation, one of two non-credited Alternative Dispute Resolution (ADR) modules offered at the Law School. The second non-credited ADR module is Negotiation. Both extracurricular modules provide an introduction to the skills required to resolve legal disputes without recourse to litigation.

Kent is preparing to host the UK final of the 2016 National Student Negotiation Competition on the Canterbury campus this Saturday after law students Tomi Popoola and Sean Wells won the title of best student negotiators in the country in 2015. Mediation and negotiation are amongst several options open to students at Kent Law School who are keen to develop their practical legal skills; other options include getting involved with the work of Kent Law Clinic, mooting, client interviewing and participation in mock trials. Downtime after the competition: Meshaal, Rachel (Easton) and Rachel (Bale) relax by the Michigan river with Janie! (The river is dyed green once a year to celebrate St Patrick’s Day.)