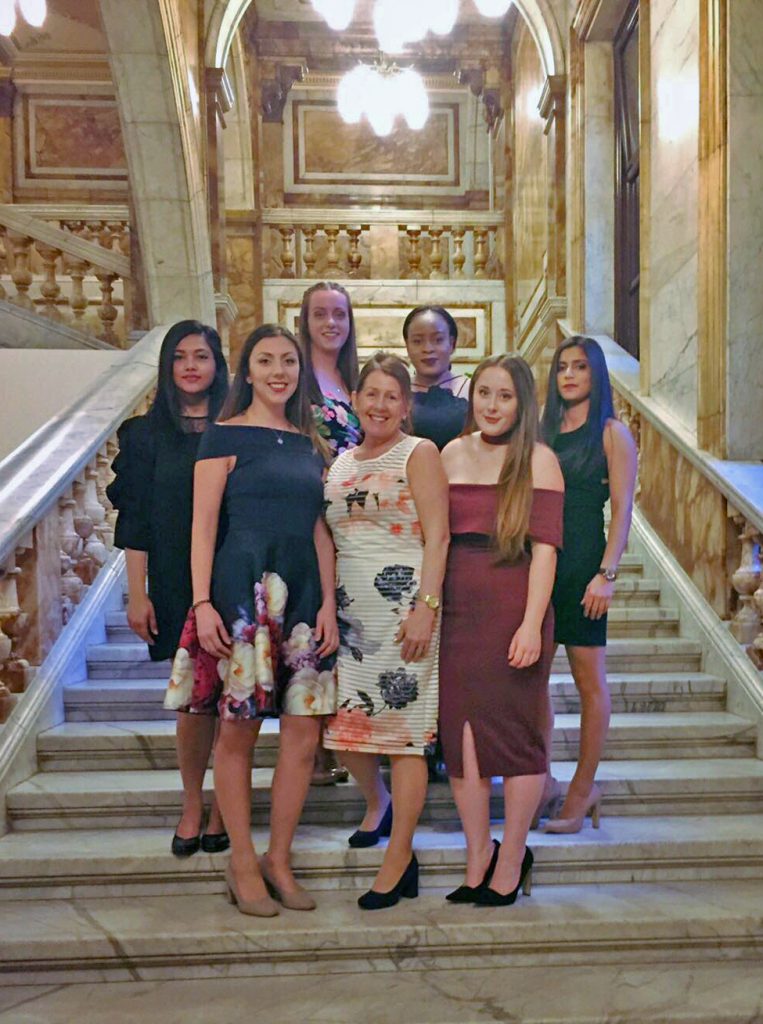 A team of six Kent Law School student mediators won two awards at the 16th International Law School Mediation Tournament held in Glasgow after reaching the final of the competition sponsored by the InterNational Academy of Dispute Resolution (INADR).

The team won a Top Ten Mediator Team Award for finishing fourth out of 42 teams and were voted winners of the H Case Ellis Spirit of Mediation Award by competitors. It’s the second consecutive year a team from Kent has scooped the prestigious Spirit of Mediation award.

Law students Sonia Soares, Mazizy Bence, Mojeedat Aderinto and Charlotte Simpson (who previously competed in the national final of the UK Mediation Competition held in Jersey in January) were joined by Gabriela Kratchanov and Kristeen Deosamy for the international final hosted this year by Strathclyde Law School. More than 125 students from 15 countries competed.

Mediation Module Convenor Janie Clement-Walker, who accompanied the team to Glasgow from 5 to 8 April, was thrilled: ‘I’m so proud of the girls. The Spirit of Mediation Award is such a heartfelt award and means such a lot as all the students participating from round the world voted us the best mediation team internationally!’

The competition gives law students an opportunity to learn about approaches and techniques used in mediation and to test their skills in the peaceful resolution of disputes. Teams of three go through three preliminary rounds serving as mediators, as well as advocates and clients. Mediators work in pairs, with the co-mediators being from different schools. This encourages students to recognize that mediation is about working together to reach a solution, rather than competing at every turn. Mediators are judged on their ability to work together with their co-mediator in addition to their listening skills, their ability to help advocates and clients see the strengths and weaknesses of their cases, their ability to stay positive and professional, and their ability to help guide the parties to a resolution of the dispute that brought them to mediation.

The chance to compete at national and international level is open to all Kent students studying a module in Mediation, one of two non-credited Alternative Dispute Resolution (ADR) modules offered at the Law School. The second non-credited ADR module is Negotiation. Both extracurricular modules provide an introduction to the skills required to resolve legal disputes without recourse to litigation. Other options include client interviewing and Kent is currently preparing to host this year’s International Client Consultation Competition from 19 – 22 April. Last year, Kent hosted the UK final of the 2016 National Student Negotiation Competition.

Law students at Kent can also develop their practical legal skills by getting involved with the work of Kent Law Clinic, recently relocated to the £5 million purpose-built Wigoder Law Building. The new building also includes a replica court room on the upper floor, home for Kent’s busy mooting programme.