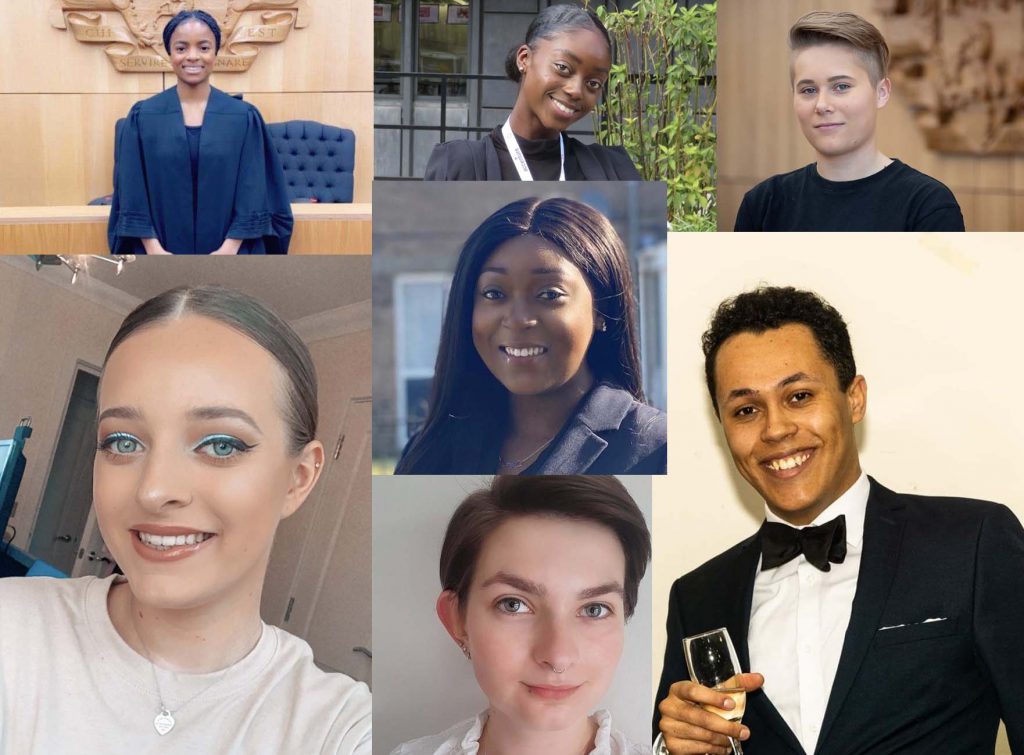 Seven Kent Law School students are celebrating this summer after securing awards from two of the four Inns of Court, taking them one big step closer to achieving their dream of becoming a barrister.

Law LLB student Beronique Addington attributes her experiences of mooting and a critical legal education at Kent as being the keys to success in securing a £10k scholarship from the The Honourable Society of the Middle Temple.

Beronique was awarded Middle Temple’s Winston Churchill Scholarship, worth £10,750, after being interviewed virtually by a panel comprising three barristers.

The “art of being critical” helped Kent law student Queenet Awesu secure a £13k scholarship from The Honourable Society of the Middle Temple.

The Inn’s Diana, Princess of Wales Scholarship, is given to candidates deemed specially deserving of financial assistance with interview criteria including an assessment of character and ability to overcome adversity.

The award will help fund the costs of the Bar Practice Course LLM that Queenet will study at the University of Law, on her path to becoming a barrister. She was also awarded the Blackstone Entrance Exhibition worth £230 which covers Middle Temple’s Admission and Call Fees.

A commitment to work experience and developing her CV paid off for aspiring criminal barrister, Beatrice Fatungase, who was awarded a £14k scholarship by The Honourable Society of the Middle Temple.

Beatrice has always wanted to be a barrister and says it’s the only job she could see herself doing and enjoying. She could hardly believe it when she heard she had secured a Duke and Duchess of Cambridge Scholarship from Middle Temple. Beatrice said: ‘I was in disbelief because I knew how many people applied and the likelihood of getting one was most likely slim.’ The scholarship awarded to Beatrice is one of only three given to candidates deemed specially deserving of financial assistance. Interview criteria includes an assessment of character and ability to overcome adversity.

Cara was one of a very select few to be awarded this year’s Middle Temple Queen Mother Scholarship – a scholarship that’s only awarded to candidates deemed ‘the most all-round impressive’. We caught up with Cara (who graduated in 2018) to find out more…

Milly, a final-year Law LLB student, was awarded a £5,000 Cynthia Terry Scholarhship by Gray’s Inn to help fund her Bar Practice Course (BPC). She said: ‘It means so much to feel supported and backed by the Inn as they are essentially investing in my future. I also felt incredibly proud and excited to be able to call myself a Gray’s Inn Scholar. It still doesn’t feel real to be honest, I keep checking the email is still in my inbox!’

Xavier Alexis-Greenfield and Tayla Dwyer secured the Michael Sherrard Award from The Honourable Society of the Middle Temple in recognition of their advocacy skills and their commitment to pursue a career as a barrister.

Xavier and Tayla were each awarded two funded weeks (£250 per week) of work experience; one week marshalling (shadowing a judge in court) and one week in Chambers.

The award, one of Middle Temple’s Access to the Bar Awards, is funded by donations of senior members of the Inn and is designed to support undergraduate students from disadvantaged backgrounds who aspire to a career at the Bar.