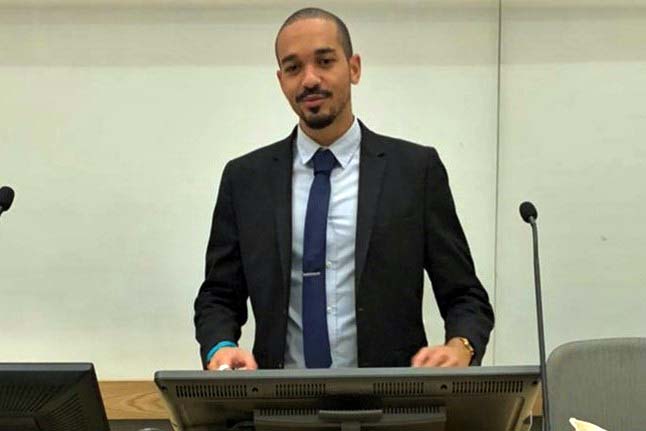 A career as a Barrister – facilitating international economic justice – is within closer reach for Khaliq Martin since securing a scholarship from The Honourable Society of the Middle Temple.

Middle Temple is one of four Inns of Court; the historic societies that educate and train barristers in England and Wales. At Middle Temple, scholarships are awarded on merit after taking into account the candidate’s intellectual ability, motivation to succeed at the Bar, advocacy potential and personal qualities. The amount of the award depends on the scholar’s financial circumstances.

For his interview at Middle Temple, Khaliq was interviewed by three Barristers, two of whom were Benchers responsible for the governance of the Inn. Khaliq said: ‘During the interview, they wanted to deduce what my motivations were for a career at the Bar and If I gave serious considerations to the profession. They also asked me to describe a case and its significance to evidence my intellectual ability.’

Khaliq said there have been two Kent Law School modules in particular which have helped shape his career ambitions: ‘Within the Privacy, Data Protection & Cybersecurity Law module, Lisa Dickson and my seminar leader Dr Alan McKenna conveyed some of the contentious elements in these areas. They explained how these contentions are applicable throughout the global context. In another module, International Law and Global Problems, Dr Gbenga Oduntan taught us how to navigate international legal conventions. This allowed me to develop a critical lens in assessing international legal principles that inform these conventions. Additionally, previous instructors such as Dr Mohammad Afshary, Johanne Thompson, and Karen Widess, were especially encouraging of my legal career.’

Before coming to Kent, Khaliq was heavily involved in student politics, student administration, and communal justice. He said: ‘I’ve seen what happens at the local level, yet so much of the law shaped the world locally, nationally, and internationally. Understanding the legal principles and arrangements which impacted my condition, and that of black folks, was incredibly important in my decision to study law.’

Khaliq says understanding and applying data protection law “is fun” but it’s not the field in which he wants to specialise as a barrister: ‘I’m determined to play a greater role in facilitating economic justice and greater regional integration between the Caribbean and the African continent. I hope to specialise in international trade and international dispute resolution at the highest level which would create a foundation for me to take on that work.’

Looking ahead, Khaliq also has ambitions to help improve access to – and diversity within – the profession for black students. He said: ‘The annual reports from the Bar Standards Board reveals that more Black law students are pursuing the Bar, but not enough are securing pupillages, and not enough black barristers are receiving QC titles. I hope to continue to center and prioritise black law students, and aid in making the legal profession more accessible for all of us.’

Finally, we asked Khaliq to share his advice for fellow aspiring barristers. He said: ‘Don’t think that you have to sacrifice community and the things you care about to maintain your academics and legal extra-curriculars. The balance is possible. Create a sustainable network where you and your peers can support each other. Deploy the empathy you want to see in this world. Additionally, if mooting seems scary initially, consider additional means and methods to evidence your ability to advocate. Get involved in a social campaign, organise a protest, set a target, achieve it, and demonstrate the results of your initiative.’