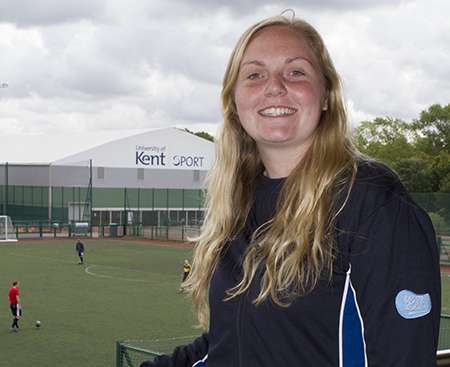 As a member of the Kent Sport team Fran Plom spends her time inspiring, motivating and organising others. A very talented netball player, who during her time as a student at Kent won Sportswoman of the year and took the UKC first team into the BUCS Premier division. Fran not only leads by example on court but also off court with her 2 terms as the Netball Club president and Netball Now coordinator.

Fran developed the intramural structure for netball, provided opportunities for students to train as umpires, created links with local schools for community activities and increased the Netball Club membership to its highest numbers ever. All this was achieved as a result of her passion and dedication to netball, not to mention her resourcefulness in times of financial difficulty for the club. Fran was rewarded at the recent Kent Netball Awards where she received the Needham Rider Salver for ‘Services to Kent Youth Netball’.

Kent Sport are delighted that Fran is now working on the new Let’s Play programme as an activator encouraging staff and students to participate in sport and physical activity. Her enthusiasm and motivation will certainly help the Let’s Play team make this new initiative a great success.