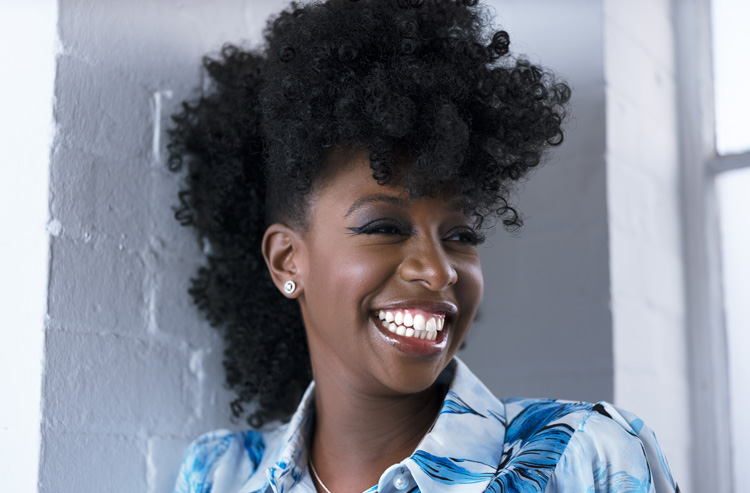 YolanDa Brown is not only a multi award-winning saxophonist and TV personality. The star took an Undergraduate Master’s in European Management Science at Kent Business School back in 2001, staying with the Division for seven years. Despite her success, her teachers and peers were not aware of her music life for most of her time at uni.

“I was leading a double life,” she laughs. “When I got my first MOBO award, the BBC called my then PhD supervisor Professor John Mingers for some quotes, he didn’t even know I was a musician! I was so torn between Management Science and this growing career in music. Kent still means a lot and when I gig at The Gulbenkian I get excited pointing out my old haunts!”

Self-taught as a saxophonist at the age of 14, YolanDa confesses to loving a challenge. She was Head Girl at her Essex high school before she joined Kent Business School and could already play several instruments to a good standard – including the drums and piano.

“When I was 13 I asked my music teacher to try a new instrument – she gave me a saxophone. I took to the instrument straight away (even though I had my sights set on the oboe!). Learning music in a formulaic way took out the magic. I used to listen to my dad’s sizeable record collection: Opera, jazz, funk, soul and folk music. I was learning music by ear. I didn’t see music as genres but more, moods.”

Like many musicians, YolanDa excelled at mathematical topics. And like many 18-year-olds in sixth form she had no idea what she wanted to do with her future.

“My parents have a place in Menorca and on one trip there a family friend was asking what I wanted to do with my life. ‘I like business and maths,’ I said. She suggested I look into Management Science, which I’d never heard of!’

YolanDa found the course at Kent Business School and went for a tour.

She says: “Walking around the campus, it just felt so warm and diverse, full of friendly people studying such varied and interesting things.”

Carrying on playing music ‘for herself’. YolanDa practiced in music rooms in Keynes on her own – barring a chance gig, where she was nursing a knee injury and was carried on the stage by two friends – for the Afro Caribbean Society.

“I loved all the Union events, The Venue and all the parties at Parkwood. I loved the Templeman Library. Even the launderette holds so many happy memories for me.”

But with the partying came hard studying, too. After a Year Abroad in Spain in 2004, she received a First-class degree and moved on to study for a PhD.

“Learning methodology within Management Science was fascinating. How an algorithm can help make deliveries, and simulation to aid decision making. I loved all that. I also loved that you could diversify – I did computer programming and Spanish alongside my modules. When I did finally become an artist and needed a website I could follow and troubleshoot the coding with the programmer, he was shocked, to say the least!”

It was in 2008 when her PhD research was heading into the writing up stage. The very same year, her music career exploded.

“I was looking into multi methodology – an area in which Professor John Mingers was the pioneer and I was supervised by him and Professor Maria Paola Scaparra. I loved the idea of bringing something new to the field – combining the hard and soft sides of Management Science.”

But that year she also received her first MOBO Award and her debut album reached no1 in the iTunes Jazz charts. YolanDa started to question if she could continue to juggle music and academia.

“When gigs came in, I had to make a choice between my studies and a career in music I had sent so many emails to John apologising and rearranging deadlines that year that I dedicated the song ‘Dear John’ on my album to John Mingers! Around this time, someone broke into my car when I was gigging in London and I lost reams of research materials (in the days before The Cloud). I started to wonder if I could really do it all.”

YolanDa admits that she found abandoning her research ‘painful’ and ‘the hardest decision of her life’. But, it’s one she has never regretted.

“I sat in John’s office and said: ‘I’ve got to follow music’. He said, ‘YolanDa take these opportunities, I am right behind you, go’. I was in floods of tears after I left; the level of support was just amazing.”

Since that moment, YolanDa has toured with the likes of The Temptations, Billy Ocean, Mica Paris and Jools Holland’s Rhythm and Blues Orchestra as well as being awarded another MOBO in 2009.

As well as these pinch-me moments she has also carved out a successful TV presenting career with Cbeebies Show YolanDa’s Band Jam and Songs of Praise and national radio channels. On top of this, she works tirelessly for children’s charities including her role as Chair of Youth Music. She still credits her business degree as helping her get there.

“There wasn’t a record label who found me – I did it as an independent artist. I had to be business-minded. Also, I am self-taught, I play alongside musicians that have studied music in depth. I have to give talks and teach masterclasses, but I do it in a very different way – combining the hard with the soft – just like the multi methodologies I researched at KBS.”

Her new focus, when she isn’t being mum to her two daughters, is writing scores and recording for animations and children’s TV – including the dizzy heights of Sesame Street.

“I began by drawing my name in a circle and thinking about all the things it could be. It was something I’d learnt through my degree, we called it Mind Mapping. We wrote down TV shows, charity work, animation, books, touring and more. I am still very much a businessperson, using all the lessons I picked up at Kent every day.”

For more on YolanDa’s upcoming tour dates and performances visit her website.