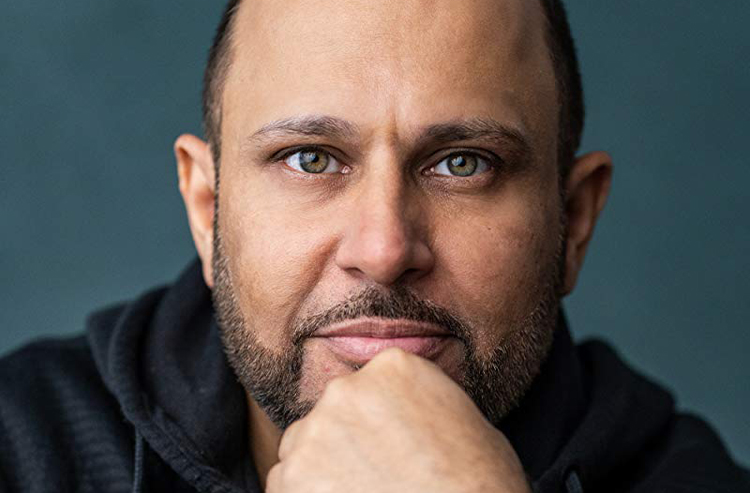 Sajid Varda graduated from Kent Business School in Accounting and Finance and went on to a successful career as an actor and producer. Last April, he set up national charity, UK Muslim Film.

“I fell in love with Kent,” explains Sajid, who started his course in 1993. “The campus, the people, Parkwood halls of residence. My fondest memory is sledging down ‘the crater’ on trays from the canteen – wild times! But honestly, unforgettable.”

At the tender age of 15, Sajid had already carved out a successful TV career. He starred in the Channel 4 cult comedy Teenage Health Freak and secured his next big break in 1996, the day he received his 2:1 degree results. It was a lead role in BBC’s Byker Grove as the show’s first Muslim character.

“When you are from the South Asian community, you’re under pressure to have something lucrative to fall back on,” he explains. “It stems from our parents struggles when first arriving in the UK and the huge sacrifices they made making sure we had a comfortable life. I opted for accounting as my sister was qualifying as a lawyer. I knew it would be a great skill to have.”

For many years after graduation, Sajid put his TV career on pause whilst caring for his unwell father but a chance meeting on holiday in Los Angeles led him back to film.

“In LA, I met a young Muslim filmmaker, Lena Khan, who discussed her film ‘The Tiger Hunter’. I was keen to know more and asked to read the script. There was something very special about her. I decided to help her produce it and as a team, we raised cash and got some big stars on the cast including Jon Heder,” continues Sajid. “It was a great production, by a Muslim woman, which was a rarity – but it shouldn’t be.” Lena has since gone on to direct for Disney and Netflix.

His experience on this project, coupled with the gut-wrenching murder of a friend’s father by a right-wing nationalist in 2013, spawned a desire to transform Muslim representation on-screen.

Following work on The Tiger Hunter, Sajid was awarded the supporting lead in a comedy film, ‘The Chop’, written and directed by the talented Lewis Rose.

“I loved the script so much I came on board as an executive producer. We went on to win over 54 international awards. This film brought together Jewish and Muslim characters and handled both communities in a nuanced and sensitive way. The way the film was received showed me that bridges can be built, and stereotypes can be challenged, but more was needed to be done to make a real difference in the industry.”

Sajid launched charity, UK Muslim Film, in April last year with the motto ‘Change the Script’. The organisation aims to transform the way Muslims are represented on-screen and ensure greater opportunities across all areas of production.

“Since 9/11 there has been an influx of storylines centred around Muslims as terrorists, misogynists, that Muslim women are oppressed, and that Islam is a threat to the West. These tropes are dangerous and have a real-world impact. For those with pre-existing anxieties, these stories just confirm their engrained prejudice”.

Sajid explained how the industry has been slow to open the door to minority ethnic talent.

“There are many talented Muslim creatives and those from other underrepresented groups that find it hard to get a foothold into the industry, it is in some ways elitist and there are barriers to entry”.

The charity is a hub aimed at facilitating connections between decision-makers and creatives to advance more Muslims into TV and film, with planned screenings and networking events throughout the year leading up to the Muslim International Film Festival scheduled for late 2022. UKMF also advises the entertainment industry on how to authentically represent Muslims on-screen and have already consulted on several productions.

Sajid’s work got him noticed and he is now co-chair for the British Film Institute Screen Advisory Group for diversity.

“The industry has been supportive, with special thanks to Jennifer Smith – Head of Inclusion at the BFI who has also been instrumental in advocating for change across the industry. We are honoured to be working alongside the BFI to create a new level of guidance,” he says. “It’s not every day you have that honour.”

Alongside the charity work, Sajid’s current accolades include producing a children’s TV series with feature films and documentaries also in the works while working day-to-day in the tech, as he has done for the last 24 years.

“My Business School days have played a huge part in my current path and successes in life,” concludes Sajid. “Practically, I use techniques taught on my course – dealing with the financial side of film production or managing my charity. Business is conducted everywhere – not just in city banks or large corporations, but in life, including the creative industries, such as film and TV.”

UKMF is creating a culture where Muslims on screen are recognised, embraced and celebrated by audiences worldwide. Find out more here: UK Muslim Film.

Universities UK #MadeAtUni campaign – Creative Sparks celebrates the immense contribution of UK universities to the nation’s creative industries and encourages the government to promote and support the importance of creativity and creative courses.

One response to “From A&F to BFI: How a KBS Alum is Revolutionising the Film Industry”