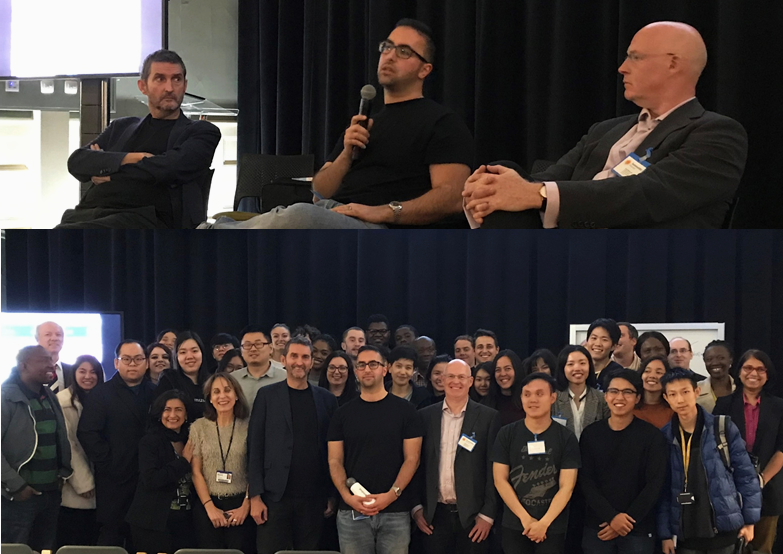 “The three speakers were fantastic people to hear from.  There was a wide variety of industries across the board, causing diverse responses to the many questions asked at the end.”

Starting with Neil Gibb, who explained how he grew up without the basic technologies we know today and remembered when each was introduced to the masses.  I found this notable because I felt he was the most

objective and could take a step back to look at what is going on in the world in terms of transformations.

He stated that we were in the middle of a transformation now, just like the Renaissance or the Industrial Revolution, this stuck with me the most. It was a way I had not thought of before; I never realised that we were present and living in a transformation, it just seemed like normal advancements. It is important to look at what’s around you and acknowledge that it might be a period people will talk about for a long time.

He went on to discuss the process of how the curve is going with technology.  The Enabling phase, the Disruptive phase, and the Transformation phase all of which you can see implemented throughout any breakthrough ideas. Overall, I really enjoyed him speaking.

Ahmed Nuaman was next, and his approach to the lecture was based more on his own life experiences, what he has done so far with an emphasis on data and consumers. It was nice to learn about the transformation aspects in an academic way and rewarding to hear from someone who has dealt with many companies.  Hearing about real-world examples, such as the companies he has worked with, from Google to YouTube to even Alexander Wang, allowed me to relate more, and he explained a lot of topics we have touched on in class, too.

The comparison of data to oil, and visualising, analysing and taking it further, was motivational and I got to personally visualise what I wanted to do for companies.

Moving lastly to Ronnie McBryde, whose stories were intriguing.  Everyone always wants to talk about their accomplishments, so when he

talked about how something failed, I had to pause for a second.  It is something that I feel people don’t talk about enough.  McBryde also brought up “Rebel Ideas” by Matthew Syed, and explained how he was able to step back to look at what was missing from the group.  He said that the majority were white, with similar skill sets, and there was a problem of not being able to understand multidimensional complex problems. With that, he decided to go on his own. I asked him ‘how you know when it is time to pivot’. He was the one I learned the most from, in terms of how to deal with failure; you always need to self-reflect and come out stronger.

After speaking to other students I realised that they also learned a lot during the event.  Aliaa Aly Ahmed Elshabrawy, an MSc DMA student, said that there were two main takeaways: the first being that “we’re living in a data revolution era similar to that of the industrial revolution,” and the second “to be able to succeed you need to cater to people’s needs – specifically tailoring to what is the most convenient for people.”

We looked at the digital transformation and these three men were able to morph how we approach our field. The experience was rewarding, to say the least.