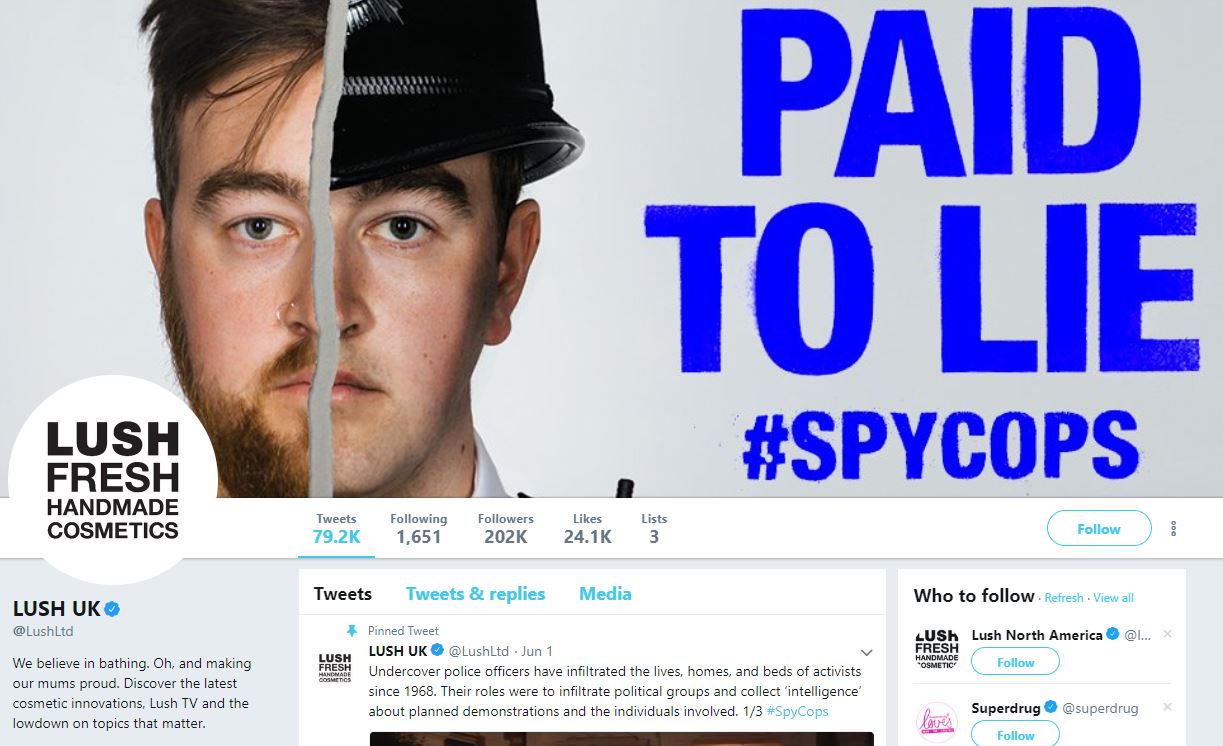 In the past Lush has been outspoken on a variety of contemptuous issues, from Guantanamo Bay through to fracking and fox hunting. It has now launched a campaign that takes a swipe at police who are tasked with infiltrating activist groups, suggesting in its own words that ‘police have crossed the line’.

The subject is very current and very divisive, with many of the allegations and revelations revealed by an enquiry into undercover policing making headlines and splitting opinion on where the line should be drawn. Lush has waded in, stating that it is trying to draw attention to “the ongoing undercover policing scandal, where officers have infiltrated lives, homes and beds of activists”.

The backlash on social media has been swift and broadly one-sided.

Some have labelled it ‘disgusting’, others ‘contemptuous’ and ‘poorly thought out’. And whilst Lush trended, its hashtag #spycops was outweighed significantly by the retort #FlushLush. Within just 24 hours of the campaign going live, Lush’s Facebook page received over 19,000 negative (one star) reviews (many of which have since been removed by the brand). Indeed a snap poll on Twitter on Friday 1 June showed that 92% of people believed the campaign had overstepped the mark.

It’s fair to say that in this instance Lush’s campaign was poorly communicated and perceived to be taking a swipe at the police as a whole, meaning many consumers will feel the urge to pull the plug on the brand. It also raises the wider question of whether – whatever its social, political or ethical stance – brands should get embroiled in current affairs and political debates. And moreover can they do so without alienating at least some of their consumer base?

Dr Yu-Lun Liu and Dr Khanyapuss (Pash) Punjaisri, both lecturers in Marketing at Kent Business School, have their own opinions on the campaign and its fallout.

“From a branding perspective, each brand has its values, reflecting its identity. Its values should guide its behaviours, and encompass all its activities.”

“In the case of Lush, the negative reactions from the public could be due to the mismatch between their message about so-called ‘Spycops’ and what Lush is perceived to be by the public. Therefore, some people may question the suitability (or relevance) of Lush getting involved as they may not understand the purpose of the campaign. Whilst Lush may wish to be perceived as being proactive with social causes, and to create a buzz around its brand, it may not have successfully established its legitimacy in this involvement. In addition, a poorly planned marketing communication campaign could also be another factor leading to an unexpectedly negative reaction.

“From the marketing communication point of view, the way the message is presented may not be effective. When a campaign goes viral, the target audiences become large and varied (as is the nature of social media and the internet). People interact with each other, exchange, create and co-create their own understanding. Therefore, they may interpret the message as if it were about the whole police sector, rather than only so-called Spycops.

“The publicity Lush has secured could be considered as ambient publicity – i.e. seeing a brand name associated with something unexpected – but the communication can become messy. It is then difficult to control how the underlying message of the campaign should be interpreted, shared, and understood. This of course poses reputational risks to the brand.

“Having said all this, by doing this campaign Lush has been talked about, tweeted, and retweeted thousands of times. Some support, some are indifferent, and some disagree with its message. Despite these various responses, it has gained its publicity and in this sense the campaign may be effective.

“The question is whether the bad publicity would be bad enough to pose them a reputational risk, or whether it is just another subject that people talk about today, and will forget tomorrow. Whatever way you look at it, though, this stunt has made the public and the media talk, tweet and report about Lush.”

Whether the campaign will have any long-lasting effects on the brand will no-doubt become apparent in the near future. However, in the short term its lack of campaign context and the poor communication of what it was seeking to achieve through addressing the ‘Spycops’ issue has seen Lush fighting fires it didn’t need to fight.

What is unquestionable is that its brand has most certainly been in the spotlight and as the old adage goes, all publicity is good publicity. Time will tell if that’s true.