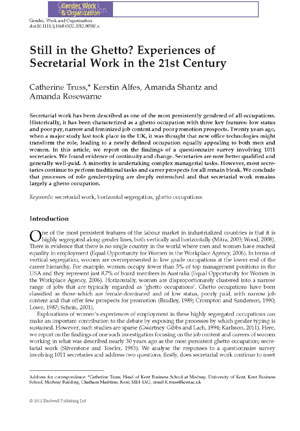 Katie Truss, Head of Kent Business School at Medway, University of Kent has recently had an article published in the journal of Gender, Work and Organization (Wiley): ‘Still in the Ghetto? Experiences of secretarial work in the 21st Century’.

Abstract
‘Secretarial work has been described as one of the most persistently gendered of all occupations. Historically, it has been characterized as a ghetto occupation with three key features: low status and poor pay, narrow and feminized job content and poor promotion prospects. Twenty years ago, when a major study last took place in the UK, it was thought that new office technologies might transform the role, leading to a newly defined occupation equally appealing to both men and women. In this article, we report on the findings of a questionnaire survey involving 1011 secretaries. We found evidence of continuity and change. Secretaries are now better qualified and generally well-paid. A minority is undertaking complex managerial tasks. However, most secretaries continue to perform traditional tasks and career prospects for all remain bleak. We conclude that processes of role gender-typing are deeply entrenched and that secretarial work remains largely a ghetto occupation.’

Professor Katie Truss can be contacted by email: K.truss@kent.ac.uk