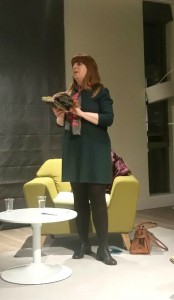 In conjunction with the University of Kent’s LGBT Writers’ Week, on the 16th of February Zoë Strachan came to talk to us and read from her 2011 novel, Ever Fallen In Love. Zoë Strachan is a Scottish writer, and she teaches Creative Writing at the University of Glasgow. She has published three novels, and is currently working on her fourth.

Zoë started the evening by reading from different sections of Ever Fallen in Love. She decided to read from this book first (rather than her work-in-progress), because she’d been thinking about it as a themed event — shaped both by LGBT Writers’ Week and LGBT history month. Ever Fallen In Love has a gay protagonist, while her upcoming book doesn’t. She read from the prologue of the book — a section that she described as being sort of out of time with the two main timelines in the novel, and then moved forward. The book is half set in the past, at university, and half in the protagonist’s present. She described it as something like an anti-Brideshead — playing around with the same structure, and the same kind of social climate at university, but developing very differently — with a very different relationship to social class. She then quoted a veteran, who she’d once heard say “the whole of my life was lived between the ages of 18 and 21; the rest is just the credits rolling.” People do get stuck on times in their life, if they’re particularly intense, she said — and so all of this fed into the novel, the story she wanted to tell.

In one of the later sections Zoë read from, her protagonist, Richard, talked about being from a place that was “a shithole, we called it.” Zoë talked about how she’d always been fascinated by small towns — where there’s obviously a lot of social pressure. This seems to tie in well with the idea of the book focusing on a relatively small period of time, even much later on — the sense of a small, intense place that forges you is a powerful one.

After these readings, Zoë told us about the new book she’s working on. It’s a family saga, set between 1935-70, and different in some ways from what she’s written before. It centres on a couple who live in a prosperous small town. She read from a section of the book set in 1961 — it’s interesting how her books use time, and directly show us the same characters from multiple, distinct places in their lives. She said it took her a long time to write — she had the idea 10-15 years ago, but it took her a long time to be able to properly fictionalise what she wanted to write about, and to think of the specific story. But once she had that worked out, it came quite quickly.

When discussing the family saga — and how it centres on a married couple in mid-20th century England, Zoë talked about how she still feels that the book has a queer aesthetic that she can feel creeping in, even if it’s less overt than in anything she’s written before. We discussed the idea of a queer aesthetic, and what it can mean — how often it becomes part of the coding of the novel, the subtext, even if it’s not necessarily textual. How it’s a way of reading as well as writing.

When asked about her writing process, Zoë told us about the genesis of Ever Fallen in Love as an example. She dreamed a conversation between Richard and Luke while she was on a very quiet writing retreat. The dynamic between the two characters, the idea or problem at the heart of how they relate to one another is what grabbed her — how does a character persuade another character to do something that goes against his principles? This was how she started. She referred back to the quote from the veteran about his life happening in a very short period of time — this would have stuck with Richard, which is why it’s still central in the sections of the book set later in his life. The sections in the book set later on are written in the third person, while the past is in the first person — this was also, she said, to make the past feel more intense, personal, while the present is at a greater distance. It helped the texture of the book, allowed Richard to be dislocated from himself in the present while he tells and re-tells stories about the past, quite consciously. She says that she usually starts writing in first person just to learn about the character, and for this book, the split came to her halfway through writing it.

But although the two timelines in the book are separated, and are written in different ways like this — they are tied together by character and memory. Zoë talked about Don Paterson having said that the upper classes claim a better vocabulary, but the actual distinction between how people from different classes talk is in syntax. So Richard leaves home and he learns whole new vocabularies from the people he meets at university — but he still uses the syntax he grew up with. After Zoë discussed this, Amy Sackville asked if she thought that class marks him as more of an outsider than his sexuality. But the two can’t be entirely separated — Zoë talked about how he’s very concerned with masculinity, and how the things that surround that are all very tangled up. He wants to be unassailable, stoic. This is part of building characters — thinking about how important aspects of context and character like class and sexuality intersect and work with each other.
Asked about whether there’s a different UK and US queer aesthetic that she can identify, with Alan Hollinghurst and Bret Easton Ellis given as examples, Zoë talked more about class, and the idea that there might be more specifically a Scottish aesthetic or sensibility. In Scotland she can identify a number of prominent queer female writers, but thinks that queer male writers are underrepresented. But then — she talked about how it took a long time for Scottish literature to even be read with a consideration or an eye for themes or aspects such as sexuality or gender in the first place. Maybe the idea was that it was the dominant struggle — class — first, and everything else second. And that’s somehow allowed one kind of scene to be built, and not another. But — the fact that she can identify a number of prominent queer female writers means that either this is no longer the case, or people are done waiting. There’s very much a sense of writing — and especially writing about topics like sexuality — as a place to experiment, and learn.