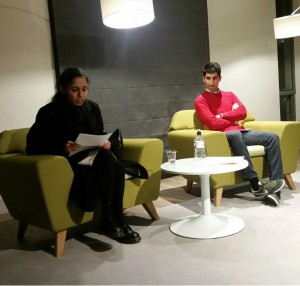 In celebration of 25 years of the Charles Wallace India Fellowship, last week two current fellows came to read and talk to us. Bikram Sharma is a graduate of the UEA writing MA, and he’s just started his fellowship at Kent, while Simar Preet Kaur is an experienced travel writer who travelled down from her residency in Stirling for the reading. The fellowships bring writers over for three months, and they often live on campus (at Kent or elsewhere). It’s the oldest fellowship that’s still running on campus at Kent, and it often benefits writers early on in their careers.

Bikram told us about having just finished the MA at UEA. He’s currently working on a novel, but he didn’t read from it because it’s still in the initial stages. He’s told us that he started writing flash fiction about nine years ago, and he read us a couple of pieces of flash fiction (very short fiction!) that he’s had published in literary magazines instead. The first story was about a woman who sees a man try to kill himself, and the second was more speculative — a magical realism story about a vanished girl that only the narrator can remember. Bikram talked about how he enjoys reading magical realism, his writing is particularly inspired by Gabriel García Márquez.

Simar is working on a book about what she called “a road in the sky” — a route in the Himalayas, mostly used by truckers, that’s inaccessible for four months of the year. She’s been living there and working on it for almost four years — the fellowship has given her time to edit before she goes back for the next season. She read to us from a chapter about winter, when there’s about 60 feet of snow. She’s been working on the manuscript in isolation, and this was the first time she’d read from it to anyone else! She’ll spend two more seasons there, and then the book will be done. She told us about how she’d worked for a travel magazine before she started work on the book, and she came across the truck drivers and the area and kept thinking about it — about how she wanted to go back. And so she did.

Asked if the isolation in the mountains is conductive, Simar says yes — it really helps her to dwell in isolation, and she can then emerge with work. She’s cut off from her peer group, which she finds helpful when writing. She also finds that the truck drivers are good to talk to about writing — they’re especially keen on poetry. She feels like she’s being trusted with their stories and she has to be careful and respectful with them. Because of climate change, this year the road will be opening early, in April, and she’s going to miss a month while she’s in Stirling. But the distance is helpful for working on the manuscript, too. “And it’s cold, which helps!” She says that it does make her characters seem more bizarre, when editing the work so far away — but it also shows her that the work is interesting to people very far away from the community.

Bikram was asked about what led him to working on a novel, since he’d focused on short stories before. There was one particular image — of a girl and a boy crossing the road in Bangalore — that he kept coming back to, and he started writing from that. He was also working with an idea he got from his mother — this idea that there are lots of different Indias that overlap. He says that he and his friends feel like they’re part of a real lost generation — there’s so much development and so many promises from the government but they don’t know what will actually happen. He sometimes feels despair, but — “then I read a book!” He says that his writing has also been shaped by living in the USA (Bikram did his BA in the US). “India is not what it’s been made out to be,” he says. The setting of his work is very important to it, but it’s not “exotic”. He wants to focus more on regular people and their realities. Writing about people, not just cultural markers.

The best part of the residency, Bikram says, is the uninterrupted time to write. He tried to be very disciplined in his regular life, and write every evening, but it’s great here to often have the whole day. He also says that when writing about a particular place it can be hard to know what to write about and what to leave out — and the distance makes it easier.

It was really interesting to hear from early career writers about their works in progress, especially about two such different projects that are interested in place. We’ll be looking out for any news about both books!