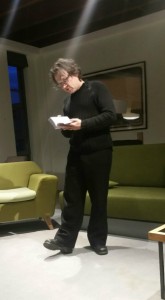 Tim Atkins is a poet and lecturer at the University of East London. His book Collected Petrarch came out in 2014, and he has a new book of poetry due to be published later this year.

Tim told us that he read a great translation of Petrarch a few years ago, when he was in San Francisco. He left the book there, and then spent a long time searching for the right translation again. The others that he found were super tedious, and it was annoying not to be able to find the right book. So, in the end, he decided to translate them himself. And in the end he found the translation that he had enjoyed in San Francisco — published by North Point Press.

He used 73 rules for translation at various points when working on the book. He doesn’t read Italian, and often made things up. He says that around half of the poems are translations, and half are just poems that he wrote that fit the project. He said that he hopes his poems stand alone — that you don’t have to know his processes to be able to enjoy reading them. He likes poetry that doesn’t need footnotes — “if you need that to begin with, you’re doomed.”

Asked about Buddhism and poetry, Tim talked about how the experience is wordless — and so, as soon as you put it into words, it’s a definition, position. It’s better without that, but — he feels that the positions he does hold are slippery. It makes him skeptical politically, which of course has a bearing on his work. He’s had a long correspondence with the poet Sean Bonney, because Bonney said that he’s always attacking the left. But Tim said in reply — I always doubt everything, but it doesn’t mean I don’t believe anything.

This led to a question about the place of fatherhood, violence and politics in his poetry. About whether poetry is a place for creating a world for our children — Tim’s daughters, in this case — to grow up in. Tim said that he thinks that poets and artists should be able to do what they want, when they want. He writes a lot about politics in his work and sees it as a necessary action, but at the same time he cautions about poets thinking that their art will change the world. It’s not going to overthrow governments.

But it also appalls him that — if you open an anthology you’re much more likely to be faced by poetry about war than poetry about children. He said that so few male poets have written about having children, which is the most profound, moving experience of his life. And so by writing about fatherhood — that is one way of changing something.

He was asked about influence and intertextuality, which led Tim back to talking about his Collected Petrarch. He said that Dryden talked about how you can translate either the word, phrase, or sentence — and these will, of course, give different results. When translating Petrarch, he read a bit about him and the things he did. He wanted to be the most famous poet of his age. And he thought about his themes — love, and difficulty, were themes that engaged him the whole way through. Every part. He said that all poems work as translations — that we should read as widely as possible, because everything feeds in to writing. “Process everything you’ve read and then something comes out.”

There’s a model of antagonistic influence that gets talked about, particularly with male writers, but he thinks of his work as engaging in more of a dialogue with Petrarch than fighting with him. OULIPO had experiments about antithetical translation, and his antithetical translation of Petrarch was — to put his children into the poems. Petrarch’s children were never in his poetry. But it’s not antagonistic — it comes from an engagement with his life, from thinking about him as well as against him.

The Petrarch poems started as Tim’s PhD thesis, and to begin with a selection of them was published by Crater Press. So about 70 of 400 poems had come out, and he said that he’d been boasting about this large number of poems he had written but unpublished — and then Crater Press said they wanted to publish all of them. So he had to spend a year going back and redoing them for publication! Some had been written procedurally, and those were left as they are — but that still left a lot. Some came quite quickly, but it varies massively from poem to poem. Some are translated properly, but others aren’t. He had written them quickly for the PhD, but spent a year working them over and probably changed about 50% of what he’d written by the time he published the book. It’s good to remember how much the drafting process can vary — and to allow yourself flexibility with your writing, space to think.