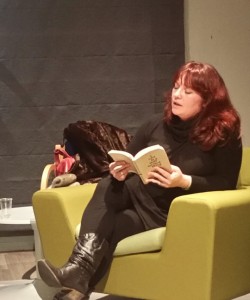 Eimear McBride is the author of A Girl Is A Half-Formed Thing, which won the 2013 Goldsmiths Prize, the 2014 Bailey’s Women’s Prize for Fiction, and many other awards besides. Her second novel is due out from Faber later this year.

The evening began with Eimear reading from the very opening of Girl — it starts in the womb, Eimear told us, “so good luck to us all.” After this first reading, Amy Sackville said that she’d been wondering how the book would sound out loud, but that it turned out to have a great orality. Eimear said that she reads her writing out loud as she writes it, and that rhythm is definitely something she considers — although she has worried if other people hear the rhythm as she does. She records her own audiobooks, she says. A way of keeping her stamp on her work — of making sure it’s read as she wants it to be.

She spoke later on about the stage adaptation of the book, which was at Edinburgh in 2014 (and is about to start a run at the Young Vic). She had been very skeptical about at it first. In the book, everything is supposed to happen inside the girl — you never see her. How could you put that on stage? But then — the language really does work very well out loud. It’s a one-woman show, and while Aoife Duffin is from a very different part of Ireland from Eimear and so speaks the language very differently, Eimear says she knew within ten minutes of seeing her perform that it would work, that she could be happy with it. She understood the language, Eimear said. And she knew how to get that across.

Amy asked Eimear how she writes, and she told us the story of how she wrote Girl. When she was 27, her husband gave her six months of writing time — when she didn’t need to do other work. She wrote three drafts in those six months, very quickly. And then she started to send the manuscript out, and — “Nobody was clamouring!” She received lots of very nice refusals, but nobody was willing to publish her book. Finally, after years of this, she put it in a drawer, and stepped away. She didn’t write at all for three years — she was temping, and had no headspace for it. And then she moved to Norwich, and through a series of events, during which she kept expecting everything to fall through — Galley Beggar finally bought and published her book. It took 9 years from Eimear beginning the book to its publication.

In response to this long journey to publication, Amy asked next if she’d ever thought that what she was doing might be too experimental, but Eimar said that she thought she was writing in a very well-established tradition. She didn’t realise that the publishing industry thought that modernism was dead for all time! And so the difficulty she had in finding someone to take the book on might have been a sign of a lack of imagination in publishing. She hopes that her book might have started to crack a once-closed door open again.

Next she told us that she’d first wanted to be an actress, and she’d trained at the Drama Centre in London — a process that was all about destroying and then building yourself back up. But she realised pretty quickly after graduating that she didn’t want to be an actress — she wanted to be a writer! She wrote lots — none of it was any good, she said, but it helped her. When she was 25, with a terrible job in the city, she decided that all that would help her would be to read Ulysses. She started reading it on the Overground to Liverpool Street. That journey was 20-minutes long. She looked up from the book to get off the train, and thought — Oh shit. Right. She threw out everything she’d written already — it turned out, Ulysses told her, that she could write anything she wanted. She wanted to do other things with language. Later on, Amy asked if Beckett had influenced her too, and she said yes and no — but “I quite like an impoverished vocabulary used to thumping effect.”

And two years after that, she wrote A Girl Is A Half-Formed Thing. She said that she had to leave Joyce “outside the room” when writing — she didn’t want to be too heavily-influenced by him. But he was important. She knew she could do what she wanted to do. If you want to write anything of any worth, Eimear said, you write about what you can when you can. Publishing seems to forget you can write whatever you like, despite all of these great novels in which the writers did exactly that. They will tell you how to write if you let them. You have to try to keep your integrity — hang on to what’s most important to you. Don’t lose sight of it. Later on she added that every writer will decide what they’re willing to sacrifice, to give up. But, for example — she had publishers say that they’d publish Girl if they could publish it as a memoir. Which it isn’t! And which she described as  being — kind of evil. And some writers might have taken that, because they want to be published.

In the end, she said, she didn’t know if Girl was good, but that it was right as it was, and she wouldn’t be persuaded to change that.

Asked whether her training at the Drama Centre has helped her write, Eimear said that the acting classes had, in some ways. They helped her understand how to create a character. It’s a very physical process for her — not literary. It’s about how — the physical situation affects them in every sense. She thinks of it as what happens inside an actor’s head when they create a role — “method writing”.

The second reading from Girl was from about halfway through the book — the section beginning “I met a man. I met a man. I let him throw me round the bed.” The voice of the book develops with the narrator, and this sounds very different to the first section she read — but it’s still recognisably the same voice, with the same kind of rhythm. It really does sound great read out loud — if you like audiobooks, this is one you should buy.

The first question from the floor was from Alex Preston, who asked about how much the success of her book felt like a vindication. She said that it felt more like a relief than anything else — relief that she hadn’t just turned out to be a bum, which she’d kind of made her peace with. She’s had her moments, but it’s more important just to keep writing. Faber had originally turned the book down, but after its success at Galley Beggar they had taken it on for the mass-market paperback, which was interesting for her. Indie presses can take the risks to put a book out, but when it starts to sell well it can be difficult for them to meet demand. This kind of deal allows them to keep an interest in her book, get some money, while somebody else takes over the production and sales.

Amy asked if the editorial process is different at Faber than it was at Galley Beggar, as Eimear’s next book (which is at the editing stage) is being published by Faber. She said that Galley Beggar had been a bit more casual about edits, and that she and Sam (Jordison) had spent more time in the pub, but they’d fought about edits he wanted at the beginning and end. She didn’t want to change the ending, and although she worked on some of the language in the opening she wouldn’t change the subject of that either. So it’s different this time in that she doesn’t go to the pub with her editor, they have serious meetings. But it boils down to the same thing – “Change this!” “No.” / “Change this!” “Yes.”

A question from the floor asked about whether the publishing machine had affected the writing of her second book, or whether she’d been able to ignore it. Because of the long time it took for her first book to come out, though, she already knew everything about this one. The final rewrite was hard — she found herself second-guessing her publisher, and readers in general. Do they want something the same, or different? She just had to remember that that’s not what you write for — you don’t write for good review. They’re nice, but if you want to be read in 100-years’ time you write what you want to write. And the publishing industry is still old-fashioned, and scared, but there has proven to be an audience for experimental works. She hopes they can realise that “readers aren’t as stupid as they think we are.” Because there’s a lot of adventurous, interesting work out there. And we want to keep reading Eimear McBride’s books for as long as she keeps writing them!