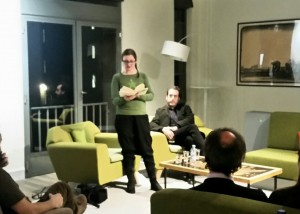 The first reader of February was Katharine Norbury, pictured here with her first book, The Fish Ladder, which was published by Bloomsbury last year. The Fish Ladder is a memoir, travelogue, book of nature writing, and more besides. There’s poetry, and folklore, and family history, and illustrations of birds, fish, landscapes. Katharine’s daughter drew and painted the illustrations, and she’s also very present in the book as a character. It’s interesting and strange, Katharine said, when art strays into life.

To kick off the reading and discussion, David Flusfeder asked Katharine how she had started writing the book. She said that it had happened by accident when she was living in Barcelona, separated from her normal work as a film editor. There was a long summer holiday — 3 months — spent in Wales, for a while just with her young daughter, and she started keeping a journal as she expects other people might take photographs. Almost as a scrapbook. So it started out as a record of the holiday for her to give as a gift to her daughter — not for publication. But, she said, then things started to go wrong — she was diagnosed with cancer not long afterwards — and the journal changed as she wrote it. At first it was a very private book, written with no readership in mind. And then it wasn’t.

Katharine read from two sections of the book. First was a section about salmon returning to the Mersey for the first time in two hundred years, from near the beginning of the book, which turns into a story about how she visited, almost providentially, the convent in Liverpool where she was born and how she learned there about the nun who had looked after her as a newborn. Because The Fish Ladder is not just a traditional memoir, it’s able to be more associative like this — she can write about fish feeling the pull back to the river, wonder what calls them, and then talk about her own life — how she felt “a pull, a draw, as though something were listening” that made her turn around, back towards the convent, and discover her own past.

David asked Katharine if she had a model, or a shape in mind when what she was writing changed from a journal into a book. She spoke about how she had been thinking of a travelogue — how The Odyssey is her favourite book, which had something to do with it. She loves the idea of story of a traveller voyaging out. And so then once more things started to happen, this was the idea she stuck with. The travelogue as a form adds discipline, it isn’t too emotional. And although she was writing a memoir which contained stories about people still living, stories that happen in the present, the travelogue doesn’t call for too much to be revealed about those people. The revelations can belong more to memory — to discoveries about the past.

She also chose to write and edit with a 5-act structure in mind, because she grew up in the cutting room, editing films, and it’s a structure that is ingrained, that she knows how to work with. And so, a certain point, her work fell very naturally into that structure. She said that it felt filmic to her — a story with a crisis, a big set piece, and a resolution. She spoke about editing as the most important part of the process of her writing. She wrote everything down and then carved away what didn’t fit the story, or her structure. She’s naturally an editor, and was able to become detached from her writing — at one point, when working on the 4th draft, she changed the whole manuscript into the 3rd person. She said that this makes it much more plain to her what isn’t interesting, and should be left behind. The final book, of course, is back in the first person. But this was a necessary step — a necessary distancing from her own work. A question from the floor prompted her to discuss this at more length, and she said that she edited it as if it was a documentary. It was the first thing she wrote, and she thinks this structure would have shaped whatever she chose to write — but it helped her, and didn’t force her to change her story or hurt her story. It worked with what she wanted to put down, and not against it.

She also spoke about how the ending of the book — a scene with her mother — originally wasn’t going to be included, but it mirrored the start of the book so well that she had to. This isn’t a loss, or about being forced to write something, but about knowing what you need to write, what will work best. It pushed for her to go deeper.

A question from the floor asked if trauma was important to her writing, and she spoke also about how she almost didn’t mention her miscarriage in the book, and ended up writing it in 14 days before the deadline. It had felt like an absence. She felt the need to make something out of it — to do something. “So I made a book.” The writing and editing process sounded very involved and necessary — as important a part of the journey as her walking had been. As memories came to her at different times, in different places, so did different realisations about moments in her life that she couldn’t leave out.

One of the casualties of editing was that Katharine had to lose 35,000 words. When asked if she felt the loss of them, she said that they are actually lost, due to a dead computer, and can’t entirely remember what they were actually about. She could theoretically retrieve them, but losing them was actually like a huge burden being lifted — a great relief. They were stories that needed to go, because they didn’t fit the shape of the book, and now there was no easy way to put them back in, to give into temptation and weaken the whole.

Katharine’s second reading was from a section about her childhood holidays, and her Auntie Marge, and the way we see more when we examine our old memories — things we perhaps missed at the time (especially if we were children), or didn’t want to see. Somebody asked if recollection has always been as vivid for her as it seems to be in the book, and she said that a lot of the memories — especially memories about her Auntie Marge — were memories that she didn’t even know she had until she visited the right place — a particular riverbank — and the memories were triggered. This, she said, is partly why the travelogue form fascinates her. The journey shapes her memories — it’s integral, it really does structure everything.

She also spoke about how a character called Mr Yields in the book has the same name as he did in real life, but spelt differently — she didn’t realise until the book was published, and somebody told her that she’d got it wrong, because she’d never seen it written down before. This is what writing from memory is like — things change, but we can still get at the truth of it all the same.