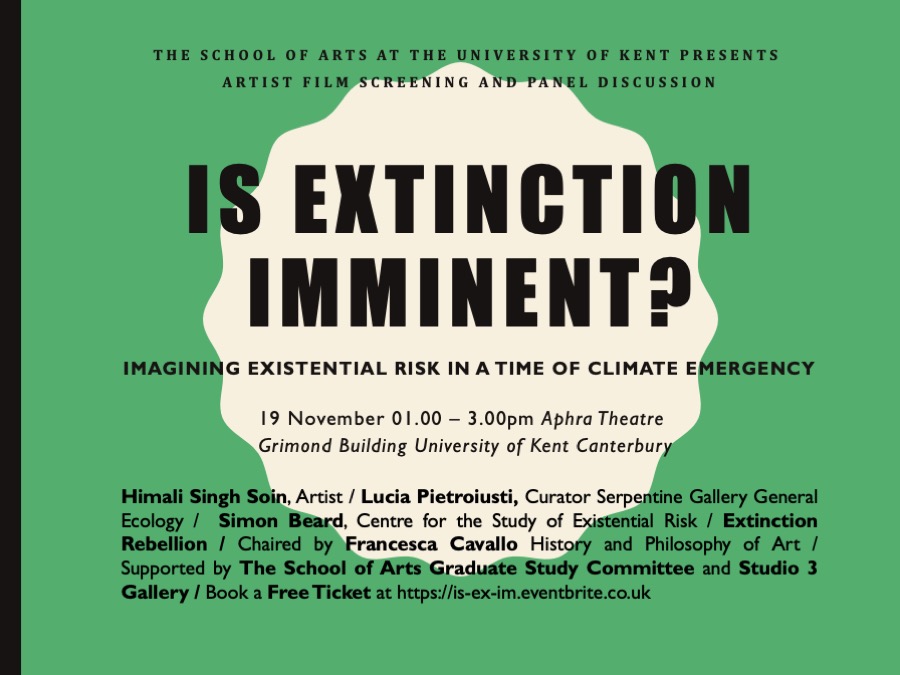 On Tuesday 19 November 2019, the School of Arts will host a panel discussion entitled ‘Is Extinction Imminent? Imagining Existential Risk in a Time of Climate Emergency’, which will take place in the Aphra Theatre at the University of Kent from 1pm to 3pm. The event will be chaired and hosted by Francesca Laura Cavallo, PhD candidate in History and Philosophy of Art.

The programme will feature the screening of Himali Singh Soin’s short film we are opposite like that (Frieze Artist award 2019), and a panel discussion with Lucia Pietroiusti, Curator of General Ecology at the Serpentine Galleries in London; Simon Beard, Academic Programme Manager and Senior Research Associate at the Centre for the Study of Existential Risk, University of Cambridge and a representative from Extinction Rebellion.

Extinction Rebellion activists took London by storm in April and October 2019 by framing their joyful pacifist action with die-ins and doomsday narratives. In academic terms, meanwhile, the Centre for the Study of Existential Risk – a multidisciplinary team of scientists at Cambridge – has been urging attention to what philosopher Nick Bostrom dubbed ‘global catastrophic risks’, in a famous article (Bostrom, 2013). As both agree that threats to the survival of humanity must be tackled immediately, the challenge is the speculative nature of long-term forecasting and the need to communicate urgency for what transcends one life span. Artistic practice, on the other hand, has long engaged with speculative futures, paid attention to the signs of endangered life and encouraged reflection on what may be, stretching our perception of geological deep time into a future behind our lifetimes. As Jacques Attali put it: ‘Like everything that is out of our control, the long term is frightening – unless it fosters a form of utopia that would allow us to believe that, purely by dint of our will, tomorrow will be the best of the past and the present combined’ (Attali, 2015).

In more practical terms, alarming visions of environmental disaster are tempting, suggesting shaking the public from complacency and short-term thinking, even as they bypass any uncertainty and inevitably (over?) simplify. Yet, at least before the impact of Extinction Rebellion, stark and immediate portrayals of climate change threats have not clearly been effective.

The event is open to all and free tickets can be booked here:
www.eventbrite.co.uk/e/is-extinction-imminent-imagining-existential-risk-in-a-time-of-climate-emergency-tickets-78596545383

The event is generously supported by the School of Arts Graduate Study Committee, with special thanks to Studio 3 Gallery, Aesthetics Research Centre, Yasmine Rix and the Critical Studies for Risk and Uncertainty Research Centre.