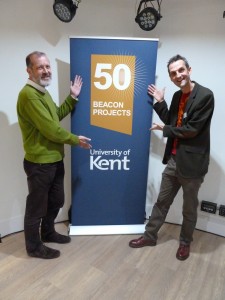 Nick Hiley and Olly Double at the launch of the British Stand-Up Comedy Archive.

Exciting news! The official launch of the British Stand-Up Comedy Archive took place on Friday 16th January 2015, as part of the Politics and Humour conference held at the University of Kent. What an appropriate setting in which to launch a collection that houses so much fantastic work from politically-minded comedians such as Linda Smith and Mark Thomas. The Glorious Launch (which was really just us saying interesting things and having a few drinks, but we did have fun) was held at the Gulbenkian Theatre, who have been incredibly supportive to this new venture. The conference itself was a star-studded affair, in academic terms. Keynote speaker Dr Sharon Lockyer (Brunel) shared her research on disability and stand-up comedy and our internationally-renowned guest speakers, including Kent’s own Dr Oliver Double, shared interesting and diverse research from the broad field of comedy. In the evening we were entertained by two of the most prominant new political comedians – Grainne Maguire (The Now Show, Stewart Lee’s Comedy Vehicle) and Liam Williams (Russell Howard’s Good News) – who we hope at some point in the future will donate some materials to the archive.

The rest of the conference was highly entertaining, with topics ranging from satirical political organisations in Northern Ireland to the practice of evil clowning. It was a great weekend and a fantastic way to launch the British Stand-Up Comedy Archive.