The British Stand-Up Comedy Archive began in 2013 and four collections have formed the basis for the archive so far:

One of the first priorities as part of the 2015 Beacon project was to look through the collections and box-list their contents, paying particular attention to the nature of the material and the amount of Audio Visual materials given to the archive.

Day 1 began by looking through the vast 25-box collection belonging to comedian Linda Smith. Linda’s collection was donated to the University’s Special Collections by her partner Warren Lakin. This huge wealth of material includes books and folders from her school-days to scripts, press and recordings from her stand-up tours and radio shows. All the boxes were so well organised and labelled that it was easy to get a good footing in understanding the collection. 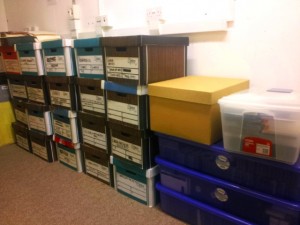 The following 21 boxes consisted of documents including school folders and reports, scripts, set lists, promotional leaflets, photographs and press. Some of the many highlights in these boxes include a variety of early stand-up notes, transcripts for the 1985 ‘Tuff Lovers’ tour with Ann Lavelle and the 1992/3 ‘Hello Cruel World’ tour with Steve Gribbin, contracts, personal diaries, and detailed documents regarding Warren Lakin’s biography: ‘I Think the Nurses are Stealing My Clothes: The Very Best of Linda Smith’ including early drafts and correspondence with contributors. 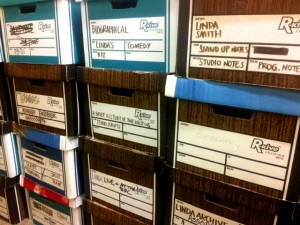 A clearer view of some of the boxes in the Linda Smith collection: sorted, labelled and donated by her partner Warren Lakin.

The second prominent collection in the British Stand-Up Comedy Archive is the Mark Thomas Collection.  Mark has donated an extensive assortment of personal material to the archive spanning his career. The collection includes audio-visual material from his stand-up shows through to his TV appearances, personal diaries and notepads, and press cuttings both written by and about Mark. A significant part of Mark’s collection and career centres around his involvement in various activist campaigns. It has been interesting to see how these activities, and his stand-up career provide context and inspiration to each other.

Personal stand-out features of the Mark Thomas collection have to include the detailed notes and plans for campaigns, working with groups such as Action Aid, and tackling problems of the big corporations such as Coca-Cola and events such as the Defendory Arms Fair in countries all over the world including India, China, Mexico, Columbia, El Salvador, Greece and Turkey. There is also a large selection of photographs taken from Mark’s McDemo’s campaigns (McDemo’s was a joint-enterprise project created to enable activists to campaign on behalf of other members of the public- creating posters and chants to demonstrate in central London). In 2009 Mark launched a tour entitled ‘It’s The Stupid Economy’, part of which sought to find the ‘People’s Manifesto’. The Archive holds the original writings of members of his audience suggesting issues they would like to be raised in their manifesto. Each night the audience would decide on the most popular points and Mark went on to publish these in his 2010 book ‘Mark Thomas Presents the People’s Manifesto’. 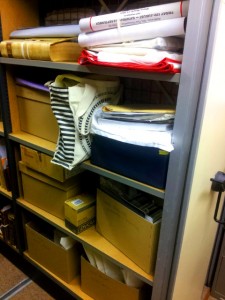 A quick snapshot of the Mark Thomas Collection including many boxes of AV material, posters and a bag full of campaign ephemera.

Other collections that have already been collected within the BSUCA include the John Pidgeon Collection and the Tony Allen Collection. More shall be written about the exciting material held in these collections in future blog posts.

The next stage for the BSUCA Beacon project is to consider the arrangement of the current collections and formalise a plan for digitization!

Please do send us your thoughts by email (standup@kent.ac.uk) or tweet us (@unikentstandup)