Archiving from Below: Parenthood, Mortality and the Historian’s Dilemma 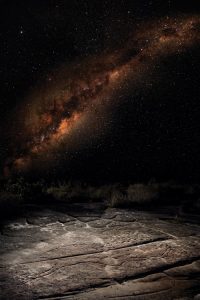 An image of the ‘Emu in the Sky’ (Milky Way) constellation, with the Emu engraving in Kuring-gai-Chase National Park, NSW below, as it might have appeared in an August evening before the European occupation of Australia. This award-winning multi-photograph image, commissioned by the author for the cover of the book ‘Emu Dreaming’, required several months of work by Barnaby Norris 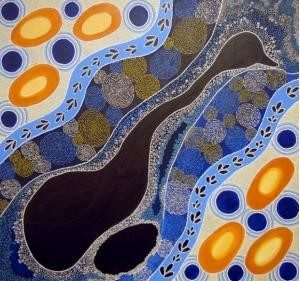 The Emu has great spiritual significance for the Aboriginal people for many male-kin initiation ceremonies. Their sacred role was (is) embedded deeply in place-based cultural attachments.1 Emus were a primary food source during the seasonal egg cycle, and remain frequent subjects in aboriginal art, reflecting their importance in the Dreaming cultures. Their consistent inclusion in stories across diverse linguistic groups is indicative of a long history.2 The rock engraving depicted in the lower section of the photo-montage lies in the Ku-ring-gai Chase National Park, Sydney, and was used as a ritual and cultural site up to the arrival of the British Fleet in 1788.3 The changing patterns of the Milky Way were clearly visible to many Aboriginal communities throughout the year. Known as Dangarra, the ‘sky-emu’, the outline shape of the dark spaces of clouds and dust (in the upper section of the photomontage), formed the body, with the head in the top right and the body and legs towards the bottom left. This interpretation contrasts with Western readings of the Milky Way, which focus on the bright stars of the constellation as opposed to the dark spaces.4 Indigenous communities draw in the soil of ancestral and ceremonial land and on the skin of participants. Dots, circles, hatching and specific shapes signify particular geological features, individuals and events. Stories were made visible only to permitted elders or initiates; others did not see them as the soils would be flattened over and skin cleaned afterwards. Ancestral kin groups utilise drawings and stories to share knowledge in close kin or male/female contexts. The acrylic painted Emu, depicted using the ‘dot’ style painting familiar in Aboriginal art is a visually pleasing but redacted representation of the Sky-emu, hiding substantial sacred meanings to modern audiences.5 The dot paintings have now become characteristic of commercial, aboriginal art. The sky-emu echoed the flightless emus on the ground, reflecting understandings of connectivity between bodies in the cosmos and on land; ‘everything under Creation is represented in the soil and the stars. Everything has two witnesses, one on earth and one in the sky.’6

The images above embody and communicate complex indigenous scientific understandings of astronomical, ecological and social relationships. As with scientific visualisations in general, they do not stand in isolation but need consideration within ‘discursive practices within which these representations are embedded’.7 Aboriginal astronomical and ecological knowledge relies heavily on the visual/metaphorical language permeating through the fabric of indigenous society.  They explain the world differently from modern societies. Representations of the cosmos are depicted in rock art, stone structures and oral storytelling, telling origin stories and tying landscape features to social and environmental relationships.8 This oral/visual communication provides 40,000-years of astronomical knowledge from origin stories of the ‘Dreaming’ to contemporary times. The Dreaming describes an ahistorical age of creation which still flows through disturbed and reduced Aboriginal communities.9

Western science seeks to understand how the world works through a ‘scientific method’, with its systematic, epistemological processes.10 This approach contrasts with traditional knowledge systems which western science perceive of as being contextual, contingent, and less credible.11  Communication systems are similarly divergent, with Western models of science focusing on peer review, written and visual tools.12 Aboriginal knowledge transmission tends towards cultural encodings in oral and visual traditions, passed to successive generations through daily social, cultural and ritual events.13  Visual productions and storytelling are used to create analogies that explain relationships between people and the natural world; they are fundamental to social and ceremonial activity.14 The images at https://www.skatelescope.org/australia/, created for a  cross-cultural scientific programme exploring sharing of indigenous astronomical knowledge, represent and communicate indigenous science.

Since the emergence of environmental and climate change as pressing global concerns, there has been a burgeoning interest in the potential of indigenous knowledge systems to offer routes to how to live within our planetary boundaries.15 These systems of understandings have become a focus of wider ‘science’, beyond their established anthropological domain.  Visual narratives of long-term socio-ecological connections provide an alternative worldview that speaks to how the world works from a particular cultural perspective, which might be of use in facing these modern challenges.16

Indigenous narratives are not made-up stories in the western sense but form part of the rich re-enactments the Dreaming orderings of the social and natural worlds and the wider ancestral cosmos. They offer predictions about change, such as meteorological patterns, tidal flows, and seasonal variations based on transitions of the moon, planets and star systems.17 This knowledge is not ‘traditional’ in the sense of being static but transcends individual, community and multi-generational lifetimes. Indigenous knowledge fluctuates not because of inherent unreliability but because it recognises changing environmental states which require ongoing adaptation.18

The aim of both western and indigenous science is to make sense of the world. Both approaches can explain seasonal variations and landscape features, dictated by different scientific ‘subcultures’.19 Western sciences use atmospheric and radar technology to map storm systems or indicate weather events, and has a short history of experience to draw on. Aboriginal cultures assess the twinkling (scintillation) of the stars to determine levels of turbulence and moisture in the atmosphere, with demarcations applied to determine specific weather events and seasonal changes.20 Dreaming pictures and stories provide narratives of how to read and live in the ensuing conditions.

The images above exemplify this; the shape and the angle of the Emu within the dark sky of the Milky Way change throughout the year, and dark spaces appear around the ‘body’ of the emu as it moves. These visual changes identify the start of the gathering season for emu eggs – a major source of seasonal protein. Ecological studies indicate that many animals adapt their breeding season in line with astronomical movements, which vary slightly year on year. Fuller et al.21 and Leaman et al.22 both note that emu egg-laying coincides with rising of the sky-emu and match slight variations between years. The metaphysical stories of the Dreaming depicted here predict the physical availability of valuable sources of protein based on thousands of years of observation and place-specific knowledge. Both the western and indigenous approaches fulfil essential functions for managing people’s engagement with their environment:

When you first see the emu … you just see the neck and the head…and as the months go by it shapes into the emu, and then … it’s sort of lying and when it does that that’s when the emu’s laying eggs and everyone hunts for them … special time.23

Aboriginal Dreaming stories have been ratified by examining alignments between oral descriptions and identifiable geological or biological events, such as sea level changes, and meteor strikes. The communicative efficiency of this ‘long view’ transmission culture appears substantial.24,25,26 Sophisticated understandings of lunar/tidal processes and the earth as a finite object rather than a flat infinity predates ‘western’ science by thousands of years.27 This capacity for communicating observations and experience enabled indigenous communities to survive in challenging environments for 40,000years.

Science is frequently characterised as objective, and art as subjective, but Daston and Galison28 note that ‘images are inextricable from the daily practices of science, knowledge representation, and dissemination’29 such that the distinctions between objectivity and subjectivity, science and art are blurred.30 The cultural history of Aboriginal art shows that this is relevant to indigenous science too. The observational and visual processes of Aboriginal astronomers, facilitating understanding of indigenous knowledge as science, correlate strongly with Western scientific visualisation activities.