All are very welcome to attend the next film screening in our Gothic season. We will be showing Alien (1979, Ridley Scott, 117 minutes). 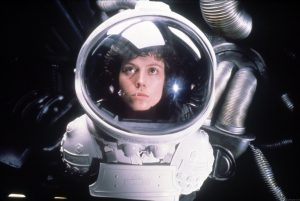 Scott’s film was the first in the highly successful Alien franchise. It introduces the audience to the tough and resourceful heroine, Ellen Ripley (Sigourney Weaver), and, more scarily, to the concept of face huggers.  Weaver appeared in all 3 sequels (1986, 1992 and 1997), continuing to take on not just terrifying alien life forms, but the sinister ‘corporation’. The fact the series has also prompted 2 prequels (2012 and forthcoming in 2017) further comments on its relevance to current society.