Melodrama Research Group member Frances has revealed that the Call for Papers deadline for the next Gothic Feminism Conference has been extended to the 14th of February. If you’d like to submit a paper pertaining to ‘Women in Peril or Final Girls? Representing Women in Gothic and Horror Cinema’ you have a couple of weeks to do so.

The following, by Frances,  is available on the Gothic Feminism website: https://gothicfeminism.com/ 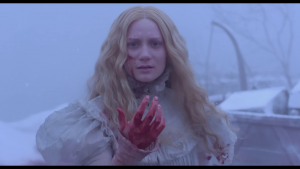 At the request of colleagues, please note the extended deadline for abstracts is 14th February 2017 (for a truly bloody Valentine’s…)

The representation of female protagonists has been a central tenant in both Gothic and Horror cinema. In the Hollywood Gothic films of the 1940s, the heroine is the primary focus as she navigates key tropes of the genre, including the exploration of the old dark house and the investigating of sinister marital secrets. These melodramas and noir films, as they have also been called, re-work the Bluebeard story and establish a ‘woman-in-peril’ character archetype which features in films such as Rebecca (1940), Gaslight (1944) and Secret Beyond the Door (1947) (Waldman, 1983; Doane, 1987; Tartar, 2004). These Gothic conventions have been revived and reworked recently in contemporary cinema with the release of Crimson Peak (2015).

Horror cinema has also been characterised by the portrayal of its female protagonists. The 1930s Universal horror films typically feature the endangered woman who is terrorised by the monster or villain. Indeed, as Rhona J. Berenstein notes, the image of a woman whose ‘mouth is open as if in midscream’ with ‘fear chiselled into her features’ is so familiar that one can argue it ‘succinctly signifies the American horror film’ (Berenstein, 1996, 1). Later permutations of the genre sustain this focus on gender representations, as with the transgressive qualities of ‘postmodern horror’ (Pinedo, 1997) or, more specifically, the ‘slasher’ film which focuses on the brutal murder of several victims at the hands of a serial killer, with particular attention paid to the killing and/or survival of female character(s). Black Christmas (1974), The Texas Chainsaw Massacre (1974) and Halloween (1978) exemplify these conventions and theorists have observed the centrality of the horror heroine within this genre: Carol Clover’s seminal work on the topic highlights the importance of the ‘female victim-hero’ and the complex gender representations inherent in this figure when she becomes the film’s sole survivor or ‘Final Girl’ (Clover, 1992).

When comparing these historic representations of female protagonists in Gothic and horror cinema, one can identify many similarities between the two genres or modes in respect to their portrayal of women. In the examples above, Gothic and horror both privilege the depiction of the woman’s experience within a narrative arc which exposes her to a danger emanating from an initially unknown or misunderstood threat. This risk – which is normally made against her life – comes from the villain or antagonist conventionally gendered as male. This correlation between Gothic and horror could be argued to stem from their shared heritage: it has been noted how the horror genre ‘has its roots in the English gothic novels of the 18th and 19th centuries’ (Penner and Schneider, 2012). This lineage is further evident by the way the terms ‘Gothic’ and ‘horror’ have been applied interchangeably as delineating categories. Horror has been labelled as Gothic: both David Pirie and Jonathan Rigby write of the ‘English Gothic Cinema’ which includes Hammer’s films, whilst Bernice M. Murphy studies US horror from the perspective of ‘Rural Gothic’ (Pirie, 2008; Murphy, 2013; Rigby, 2015). And Gothic has been called horror: Mark Jancovich points out how the 1940s Hollywood Gothics were also understood as horror films at their time of release (Jancovich, 2013). Both Gothic and horror have also attracted considerable attention concerning their depiction of women and whether such texts are ‘feminist’ (see, for example, Pinedo, 1997; Freeland, 2000).

Yet there are also significant differences between Gothic and horror. The two modes or genres can be distinguished by variations in how the central female protagonist is depicted. The Gothics of the 1940s focus on the representation of the heroine within the intimidating space of the ancestral mansion, but the 1970’s slasher horrors emphasise the ‘Terrible Place’ (Clover, 1992) where extreme violence is executed. Where the Gothic emphasises suspicion, suspense and mystery, the horror film showcases blood, torture and gore. Berenstein notes how the contrast between Gothic and horror is also present in ‘classic horror’ – pre-dating the slasher – where ‘[unlike] the Gothic novel, however, heroines are not confronted by the men closest to them … Instead, women are attacked or seduced by foreign male (and, sometimes, female) fiends’ (Berenstein, 1996, 12). Gothic and horror also differ in their presumed target audience. The Gothic – an integral part of melodrama and the ‘woman’s picture’ – has traditionally been analysed in terms of the Female Gothic and its appeal to female audiences (Waldman, 1983; Doane, 1987; Modleski, 2008). Conversely, the spectatorship for horror has been characterised as adolescent and male (Williams, 1984; Clover, 1992; Creed, 1993).

This conference seeks to re-engage with these discussions of gender within Gothic and horror cinema by directly comparing the two. What relationship does Gothic have to horror – or horror to the Gothic – in respect to female representation? What makes a Gothic heroine different from (or, indeed, similar to) female victims/protagonists in horror films? What can we say about the centrality given to female performance in both these genres/modes? Where does one draw the line between Gothic and horror in film? 2017 will mark 30 years since Mary Ann Doane published The Desire to Desire and 25 years since Carol Clover published Men, Women and Chainsaws. This conference will also reflect upon the impact of seminal works on Gothic, horror and gender such as these within film theory. What do these works tell us about the relationship between Gothic and horror in respect to female representation? How do theories of the ‘woman’s film’ and the ‘Final Girl’ relate to contemporary film theory and feminist criticism? Are these ideas still applicable to recent Gothic and horror films, and their heroines?

In addressing these questions this conference will underline the importance of female protagonists in Gothic and horror, within film history and contemporary cinema, and ask: are these characters women-in-peril or Final Girls, or both?

– The connection between the Gothic or horror heroine and other characters within the narrative, such as the love interest, male villain, other victims, etc.

– How the Gothic and horror heroine relate to archetypal roles, such as the victim, the mother or the monstrous-feminine

– Film theory and the distinction between Gothic and horror in cinema

– Female spectators of Gothic and horror and fandom

Please submit proposals of 500 words, along with a short biographical note (250 words) to gothicfeminism2016@gmail.com by 14th February 2017 (please note the extended deadline).

We welcome 20-minute conference papers as well as submissions for creative work or practice-as-research including, but not limited to, short films and video essays.

This conference is the second annual event from the Gothic Feminism project, within the Melodrama Research Group in the Centre of Film and Media Research at the University of Kent. Gothic Feminism explores the representation of the Gothic heroine on-screen in her various incarnations.

Freeland, Cynthia A. (2000). The Naked and the Undead: Evil and the Appeal of Horror. Colorado: Westview Press.

Tartar, Maria. (2004). Secrets Beyond the Door: The Story of Bluebeard and His Wives. New Jersey: Princeton University Press.