All are very welcome to join us for the first Melodrama meeting of 2017.

We are going to discuss the BBC’s recent 2-part adaptation of Agatha Christie’s short story The Witness for the Prosecution. As the production is over 2 hours in length, we ask that you watch it beforehand.

You can find the episodes on iplayer, available until the 25th of January, here: 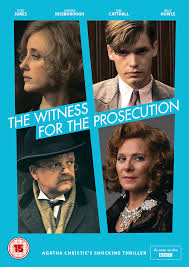 Adapted by Sarah Phelps (who was also responsible for 2015’s Agatha Christie 3 parter And Then There Were None), the production centres on the trial of a young man accused of murdering an older, wealthy, widow for her money. It  opens out the story in very different ways to Billy Wilder’s 1957 film starring Charles Laughton, Tyrone Power and Marlene Dietrich. Phelps updates the story for our modern times with a sexy older woman (Kim Catrall) catching young Leonard Vole’s (Billy Howle’s) eye. The adaptation is also firmly placed in its post World War I context with many of the characters still dealing with the aftermath of the conflict.

Do join us if you can for discussion on the adaptation and plans for the coming term.