All are welcome to attend the second of the Summer Term’s Maternal Melodrama themed Screening and Discussion sessions, which will take place on the 20th of May, in Jarman Studio 6, from 4-7pm. 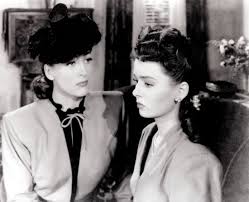 Mildred Pierce (Michael Curtiz, 1945) is the next film to be screened in the Melodrama Research Group’s series of maternal melodramas, leading up to our symposium on this topic on 3 June. But if it is a maternal melodrama, why is so much written about it under the film noir label?

The film, adapted loosely from the James M. Cain novel of the same name, tells the story of Mildred Pierce and her journey to business success and personal failure. Much of the film’s moody opening seems as if it is trying to force Mildred into the role of noir’s usual femme fatale, but as the narrative succumbs to its flashbacks, her motherhood, as well as other factors, complicates this. 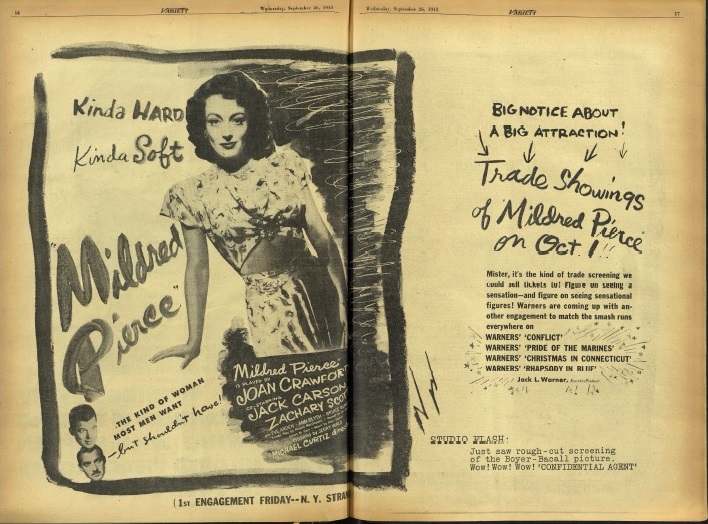 The movie poster’s tagline is in accord with this noir presentation: “The kind of woman most men want – and shouldn’t have! That’s…..Mildred Pierce”, though an earlier piece of publicity had more simply “Kinda Hard Kinda Soft”. Neither seems to do justice to the narrative exigencies to which Mildred is subjected. Perhaps the significant factor for our Melodrama Research Group to ponder is that the film does not easily fit any generic label, but rather exceeds several; furthermore, as theorists have shown, film noir was not an industrial category at the time and, as Steve Neale suggests, neither perhaps was melodrama. There will be much to consider and much to enjoy, then, as we watch Joan Crawford head a talented cast as Mildred and listen to Max Steiner’s supple and evocative score.

Steve Neale, “Melo Talk: On the Meaning and Use of the Term ‘Melodrama’ in the American Trade Press”, The Velvet Light Trap, No. 32, 1993.

Do join us, if you can, for this Hollywood Classic.